Sydney believe Lance Franklin is on the right training program that will allow the superstar veteran to overcome his injury woes and return to an AFL field in 2021.

One of the AFL’s greatest-ever forwards, Franklin has been ruled out for the rest of the season without playing a game.

The 33-year-old suffered a serious hamstring injury in May, but it was groin soreness that saw the Swans rule a line through his comeback bid.

The Swans will miss finals for the second year in a row so Sydney were never going to rush back their most electrifying player.

“It will be a long-term build for next year.

“We’ve got to make sure we get him strong, to be able to train well enough, to get him playing some good, strong AFL footy.

“He won’t be training like a 22-year-old, but we need to get him strong enough to be able to get resilient enough to then go through the season without getting injured.

“The main step first of all is getting him strong through his core.”

The future hall-of-famer still has two seasons to go on the monster nine-year deal he signed with Sydney upon leaving Hawthorn at the end of 2013.

Until 2019, when he missed nine straight games with a hamstring issue, Franklin had been mostly durable since signing with the Swans.

Franklin will continue travelling with Sydney for the final five rounds of the season and shapes as an important off-field presence for a developing team.

On Saturday night at Optus Stadium, the Swans kicked their lowest score (2.7.19) since South Melbourne relocated to Sydney in 1982.

“We were disappointed with the difference between the week before (an upset 41-point win against GWS) and the game against Fremantle,” Longmire said.

“There’s some work we need to do, particularly with our connection work forward of centre.”

Lance Franklin won’t play another AFL match until 2021 after Sydney’s medical team made the call to put the superstar on ice.

The Sydney Swans were restricted to just two goals in their 31-point loss to Fremantle on Saturday night and Tom Papley’s brain fade didn’t help their cause. 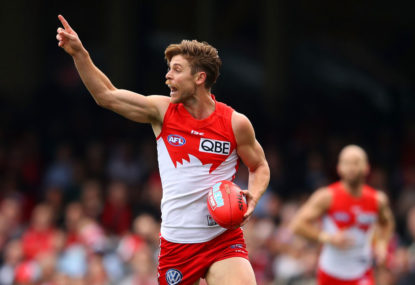