Who won the NBA Draft Lottery?

For the 35th year, the NBA Draft Lottery came and went.

For many casual basketball fans the lottery was like a Ben Simmons pull up from anywhere outside the key, ignored.

However, for fans of woeful teams, and the Warriors, the draft lottery was our version of the playoffs.

As each team is read aloud all you can do is pray that your team got lucky and has leapfrogged into the golden top four spots. Maybe this will be the year that your team is saved by a star prospect and next year you’ll be one of the fans completely ignoring the existence of the lottery.

For the Timberwolves and the Warriors – who have seemingly scammed the league into a top four pick – a year of bad basketball paid off holding spots one and two respectively. For the Hornets and the Bulls, a jump into the top four seems like the perfect way to get themselves back on track. But will this really help them?

For some teams the Draft Lottery has become a regular occurrence. The Sacramento Kings, who after an uninspiring bubble performance, are back in the lottery for the record 13th year in a row.

Yet, every year, the Kings come back to the lottery in the hopes that maybe, just maybe, a jump into the top four picks will be the ticket back to the playoffs. But do they and all bad NBA teams really need it?

This year the Denver Nuggets were the three seed behind the two LA powerhouses and the year before the two seed behind the stacked Warriors. Their team, led by second-round pick Nikola Jokic, has become a force in the loaded west for years to come.

The Nuggets front office have managed to create a successful NBA roster with only three players that were picked in the Draft Lottery: Jamal Murray, Michael Porter Jr and Noah Vonleh (selected by the Timberwolves). A perfect example of how draft position comes second to draft scouting.

Slam Online recently named their All-Bubble first and second teams. Only three of the ten players listed are top four picks in their draft years. The rest are not even top ten picks, excluding Damian Lillard.

However, with proper scouting and the correct team environment, teams will be able to secure a great NBA player irrespective of the draft position. 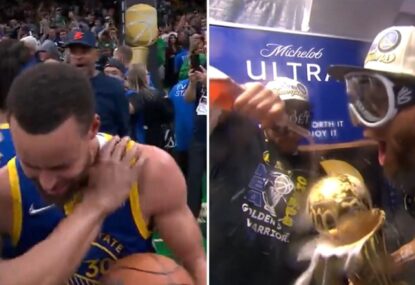