Southern Districts have been one of the surprise packets through six rounds of the Shute Shield. The Rebels have won four of their first five games and currently sit fifth in a cluttered top half of the table.

This comes after finishing a disappointing ninth in 2019. They began that season well too, starting 3-0 before dropping 11 of their final 14 games.

That’s unlikely to happen this year. Not with Todd Louden now at the helm.

The former Waratahs assistant is the new head coach of Souths and things already feel very different. And it’s not just the wins. The side has looked gutsy, determined and more polished in the early going.

Louden’s overarching goal upon arrival at the club was engineering a strong foundation. One that begins at colts then progresses right through their grade system.

“We have some great young talent coming through from our five junior clubs,” he says, “but we probably didn’t cultivate or prepare them well enough to play (in the past).

“So now we want to ensure that rather than it be just about first grade we’re developing from the bottom up.

“This one-club mantra and approach has already helped some of our depth. It’s only our first year and we’re starting to see some payout, but we’ve still got a long way to go yet.”

That payout has included wins over last season’s top two finishers – Sydney University and Eastwood. The 32-31 victory over the Students in Round 5 was the game of the season so far.

Souths were all but goners trailing 31-22 in the 79th minute. But two minutes can be a long time in rugby. Actually, it took nearly nine minutes at the end of this game.

The Rebels scored two tries in that time – the latter coming in the 86th minute – to snatch a thrilling victory. The jubilant Souths players were then swarmed upon by their reserves, second-graders and basically anyone wearing blue and red like bees to a honeypot.

Louden has been a part of plenty of dramatic victories in his 20-plus years as a coach. Bryan Habana’s Super Rugby championship-winning score for the Bulls when the Aussie was their attack coach in 2007 still ranks No. 1. But Dominic McGrath’s late winner to topple Uni is certainly a contender for top five. 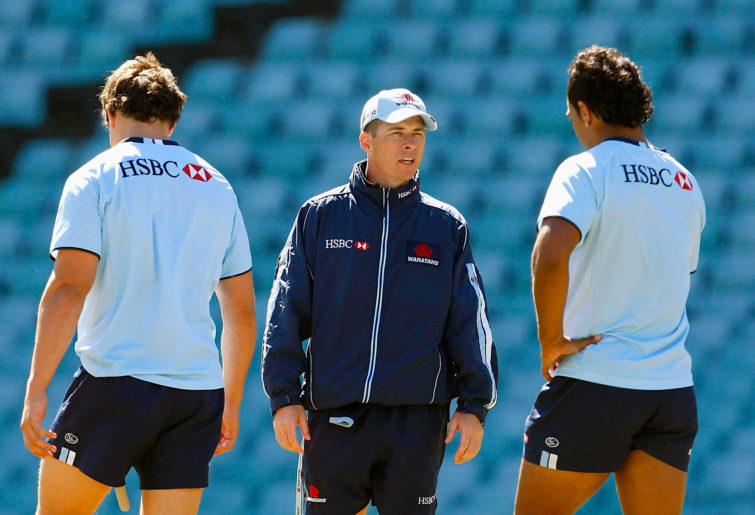 Todd Louden during his time with the Waratahs. (Photo by Cameron Spencer/Getty Images)

“It’s definitely up there from a coaching perspective because you could see the emotion that poured out at the end of the game,” he says.

“There was belief there that they could do it and they just backed themselves. For a young team that’s pretty amazing.

“They were out on their feet but they knew what they had to do and just put their minds to it. The team grew in that game so that’s one of the things that was really pleasing.”

The delight comes through clearly in Louden’s voice. He’s no doubt revelling in this role after nearly quitting coaching last year.

“I’ve been dealing with some issues,” he says, “as my parents have been sick.”

“My family have moved to Wollongong and I reached out to Southern Districts to say I would help out when I can, as they are the closest team. But I was actually going to get out of rugby, to a point, because I was dealing with other stuff.

If anybody qualifies to judge if a plan to succeed at Shute Shield level is naïve or not, it’s Todd Louden. The 50-year-old was previously director of rugby at Sydney University, where he set up the Elite Development Squad (EDS) in 2004. This helped jump-start a University dynasty in the back half of that decade and beyond.

Louden also vaulted Randwick from ninth to minor premiers in his single season coaching there in 2006. More recently he presided over consecutive winning seasons with West Harbour in 2017 and 2018 after the club posted a 6-12 mark the year prior.

The man knows how to get the job done. His first prerogative upon arrival at Souths was to bring the club into the modern era, as he felt they’d slipped a notch or two behind their competition rivals.

“I thought that we (the club) probably haven’t moved with the times,” he says.

“I identified things like sports science, our game management, our operations on and off the field and just getting these levels up first. Also establishing a really strong work ethic and our approach to every game.

“I definitely didn’t have a goal to make the finals or that sort thing, more to just attack this season and raise our standards. We don’t want to get ahead of ourselves thinking about who we are playing next, are we going to play finals, the ladder, or even the scoreboard on the day. It’s been a real break away from that.

“The focus is on how fast and how far we can develop this year. We’re just taking it one game a time, as cliché as that sounds, and trying to improve every game.”

Louden was once upon a time a high school physical education teacher. You can sense the pedagogue still exists in him as he discusses his approach to coaching. Not gruff or intimidating, Louden comes across affable, measured and cerebral.

“All of our training is either game-based or compete-based,” he says. “We team-coach and try to give the players cues on the run in a game environment: what did you see? Why did you take that option? Is there a better option?

“It’s hard. It’s challenging. Some of the players are used to rote learning and we’re trying to break them out of that. We’re big believers in throwing them in the deep end and letting them problem solve.”

Louden and his staff are trying to get away from structured rugby and encourage their players to be more active decision-makers, a change that may enable their talents to flourish and also differentiate their play from other teams.

“So we pulled it apart and put it back together, particularly the way we play as a pack. Mainly we wanted to induce a new system that we felt that no-one else was using.

“Have we got it right at the moment? No. But we’re trying to get the ball into the right people’s hands as opposed to forcing people out of their comfort zones to do something that’s not naturally their strength.

“I look at the way we’re playing and we’re quite hard to scout at times because it looks erratic. That’s partially the design we created: to get away from being over-structured and play a little bit more ‘what’s on’ rugby.

“It’s a bit like sparring then – when the opportunity arises – being in a position to take it. We didn’t want to inhibit some of the natural skills of the players.”

At 4-1, and with two major scalps to their credit, this approach has quickly delivered results. Individuals are also starting to prosper within the Souths set-up. Louden points out a few who he thinks can kick on from Shute Shield.

“Isoa Nasilasila, he’s a Westfield Sports High boy who’s just an outstanding talent and plays above his years for a lock,” he says.

“Harry McLennan, our No. 7, is a real goer. He’s one you wanna play with not against. Laurence Tominiko, our 20-year-old prop, he’s very smart and he’s very quiet yet in his second game of first grade ever (against Sydney University) he’s slapping all the boys on the back saying, ‘C’mon, let’s go. Let’s get this last try!’.

“We’ve also got some good young backs. It’s really their developing year to see whether they go through.”

They’re young, fresh, dynamic and seemingly getting better every week. But it must be remembered that this is a work in progress. People’s short and medium-term expectations should be tempered as the team and its players will have their growing pains.

Which they did just one week after that day out at Uni. Table-toppers Randwick strode into Forshaw Park and whipped the Rebels 34-5.

“It’s going to be a tough one,” Louden admitted prior to the game. “Not all is lost should we lose. Every game we’re taking as a learning curve. We’re not getting too far ahead of ourselves.”

Measured words. And the words of a pragmatist who understands that cultural change does not yield results overnight. The focus for all Souths sides now is on the process, with Louden right in the middle of it.

“I’m very hands-on,” he says. “Obviously I’m leading first grade but because we’ve got this one-club, bottom-up approach I’m there from fourth grade all the way to firsts. I’m in the huddle at halftime with all the teams.”

It’s all about the long-game for Louden and Southern Districts. But with the players and staff seemingly buying into the process, it won’t be surprising to see more good outcomes before too long.