I have been a long-time reader of The Roar but only a short-time commenter. One of the many reasons why I love this website is of course the dedication and passion shown by the contributors like your Bishops, McKays, Parkes and of course all of you folk out there reading this (hopefully!).

I then started running a hypothetical list over in my head about my favourite players from every major rugby-playing nation and I thought, ‘there’s an article in that!’ So here I am.

First off, the rules.

1. These are my favourite players from each of the big rugby nations. Not necessarily the best players, but players I have loved watching over time.
2. I’m only allowed to select five per nation otherwise it becomes too many.
3. I have decided to do it from players I have actually seen, either live or on TV, so that translates to about 1990 to now.
4. I will choose one tier one nation at a time – Australia, New Zealand, South Africa, England, Ireland, Wales, France, Scotland, Argentina and a special at the end of odds and sods. Apologies to Italy but I don’t really count them as a major playing nation although one player will make an appearance at the end. Apologies to Japan as well but I just don’t know enough of their players yet.

Joe Roff
Wingers often get a hard time here on The Roar and rightly so! But even the most grisly, cauliflower-eared forward could admire the talent this man possessed. Roff made the impossible look easy and effortless. Did he ever look like he was running at full pace? He was an absolute superstar of the Wallabies’ golden era who contributed time and time again. Of course, Roff’s crowning moment was the 2001 British and Irish Lions tour where he single handedly won the second Test off of his own back. For those of you that don’t remember, Roff scored two tries in seven and half minutes as the Wallabies wrestled back the momentum of the match and series and the Lions could never take it back. It was one of the great Test series as well. He was a man crush for both me and my Welsh-born but Wallabies-supporting father after this effort.

Tim Horan
A lot of rugby supporters have forgotten how good Tim Horan was. I had a news clipping on my bedroom wall of Horan after the ’99 World Cup semi against the Boks and the headline said: “Horan Proves That Heart Can Be The Path To Glory”. 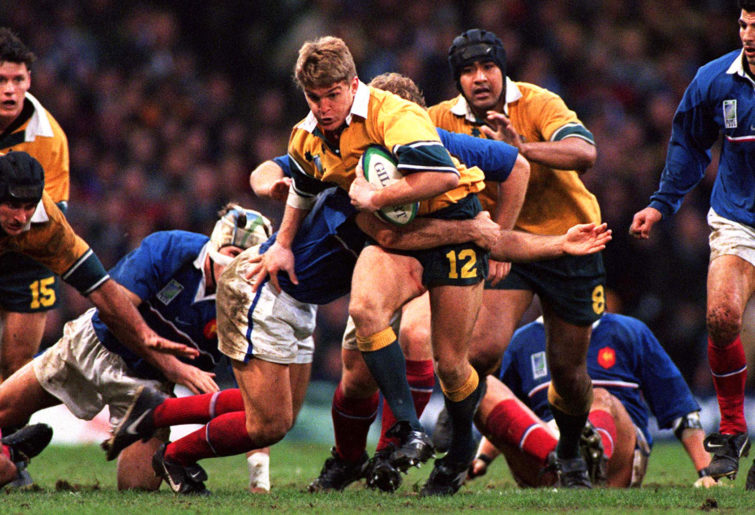 For those of you that don’t remember, Horan was incredibly ill in the lead up to this match and couldn’t get out of bed with a stomach illness. Like a phoenix rising from the ashes Horan stood up alright! He played arguably the greatest match of his career. He was in everything and I strongly suggest tracking the match down and having a re-watch. Unless you’re South African, you should just re-watch the 2019 final instead.

George Smith
Where do you start? It’s not often in Australian rugby you can say you had someone that changed the way the position is played but in Smith, Australia did. Making his debut in 2000 against a hard bunch of Frenchmen, Smith announced himself on the world stage. He was an incredible fetcher and one of my earliest memories of him is being pinged by referees as they thought he wasn’t supporting his own body weight while hundreds of kilograms of garlic-infused Frenchmen were jumping on top of him. Of course, his battles with Richie McCaw later on were the stuff of legend and old Richie might get a go in the NZ edition. With Smith though you can’t not talk about his longevity. He only stopped playing pro rugby last year! Smith was a wonderful link man as well and had the incredible thing that has been missing from Australian rugby for so long: a brain. A freak.

Chris Latham
Like Joe Roff, I used to look at Latham and think ‘he’s not that fast!’ Clearly, I was wrong. Latham was an absolute monster of a player. At over a hundred kegs he was a big boy but boy could he motor. With over 40 Test tries he certainly knew his way to the try line as well. One of my favourite sights in rugby was watching Latham point to the crowd before he scored. I know that used to annoy lots of people but it showed me how much he loved the stage. In 2006 he was the first back awarded the John Eales Medal and the following year he was nominated for the World Player of The Year award. I remember at the time desperately hoping he would win after the awful exit at the World Cup quarter-final for the Wallabies. Latham always looked like he was having fun and was the sort of bloke you’d just love to play with. There’s not much more I can say.

John Eales
Of course, any rugby fan from any nation would, or at least should, have this man on the list. He was a remarkable man (maybe not administrator) who captained the Wallabies to everything they could possibly win. 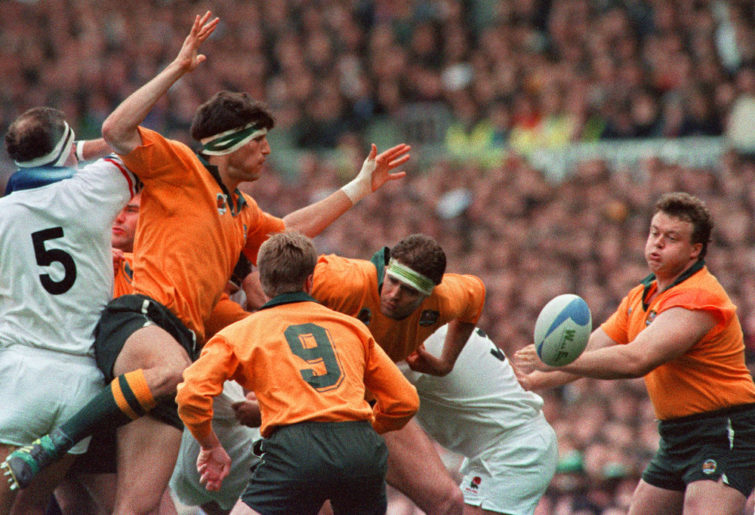 Choosing some career highlights for the man they call ‘Nobody’ is very difficult. I was fortunate enough to be in attendance at the 2001 Bledisloe when Toutai Kefu stormed over for that try. Even the Kiwis sitting near us were happy for Eales (begrudgingly). Of course the 2000 Bledisloe kick is a real highlight and the story behind it as well. Stirling Mortlock was off the pitch at the time, which Eales was unaware of when he instructed the referee that they’d be taking the points. This resulted in Eales stepping up and taking one of the most impressive kicks in Australian rugby history. He was one of the finest leaders of any sport and an outstanding player.

Honourable mentions
Michael Lynagh: I loved his control and the calmness he brought to the role. He was a great goal kicker too.

Stephen Larkham: A really hard one to leave out but a phenomenal player and one the best flyhalves I’ve seen.

Sekope Kepu: The forward revolution brought on by ‘Super Mario’ Ledesman benefited this guy more than most. He was a world-class tighthead.

Stirling Mortlock: He was a hard, physical and tough outside centre. He will always be remembered for the ’03 intercept.

There we have it Roarers. Who were/are yours?