In what seems a lifetime ago, I wrote an article after David Warner’s 335* against Pakistan arguing that Warner should have been allowed to go for Brian Lara’s record.

While precisely none of The Roar crowd agreed with me, I still stand by that view.

The thrust of the article was that the world record innings is such an important and memorable milestone that if it there is no real downside to chasing it, the batsman should be allowed to have a crack at it. I further noted that of all the times that a batsman has been declared upon in with a realistic shot at the record in the context of a match, it has been Australian batsmen who were the victims each time.

In saying that, I argued that for Mark Taylor’s 334*, Michael Clarke’s 329* and Warner’s innings, achieving the record in each case was realistic and was unlikely to have changed the outcome of the match or series and therefore it was worth allowing an attempt at it.

The only other innings where I took pause in making that conclusion was John Edrich’s remarkable 310* against New Zealand at Headingley in 1965. This article will look at that innings in a bit more detail.

Who was John Edrich?
Edrich himself was an outstanding batsman for Surrey and England. At first class level he scored nearly 40,000 runs at 45.5 with 103 centuries and in his 77 Tests he scored 5,138 runs at 43.54 with 12 tons. Outside of Geoff Boycott, he was clearly the leading English opener of his era and no less than Dennis Lillee described him as one of the hardest players of the era to bowl to.

The two have form. Edrich was Lillee’s first ever Test wicket at Adelaide in 1970-71 but not before he had scored 130. Yet despite his strong first-class form, Edrich was not a regular for England until his late 20s, and he was only in the side for the Headingley Test (his ninth) because of an injury to Boycott. Headingley 1965 and Adelaide 2019
One thing that stands out with this match is its similarity to Warner’s match. England had already won the series with two easy victories and they batted first in a match that had rain forecast for most of the five days play. Like Australia, England lost its other opener early and like Australia, the second wicket put on over 360 runs (with Marnus Labuschagne scoring 162 to Ken Barrington’s 163).

By stumps on day one, neither match could be lost by the home team. Eventually, both sides declared a few wickets down on day two for well over 500 runs with their not-out stars around 60 runs short of the record. Both sides went on to win by an innings.

A true outlier
While Warner’s innings was one of the fastest triple centuries ever in terms of strike rate (80.14) even with his 39 fours and a six he doesn’t come close to Edrich in terms of boundaries. In fact, no innings in Test cricket comes close. Edrich’s 52 fours (plus five sixes) and 238 total runs in boundaries is unparalleled in Tests.

In Tests, the 57 total boundaries is eight more than the next best (Hayden again) with 49. To put that into perspective, there are 20 other innings within eight total boundaries of Hayden’s.

And all this in the days of no boundary ropes and no giant bats. By many measures, the innings is a total outlier in over 140 years of Test cricket.

Could England have batted on at Headingley?
For my sins, I am a member of the Association of Cricket Statisticians and Historians. It is an association for cricket supernerds whose former chairman is none other than MJK Smith – the England captain for that Headingley Test. When I raised the question of Edrich’s innings on the ACS email list back in December, one of the members took it on himself to ask Smith about it directly. 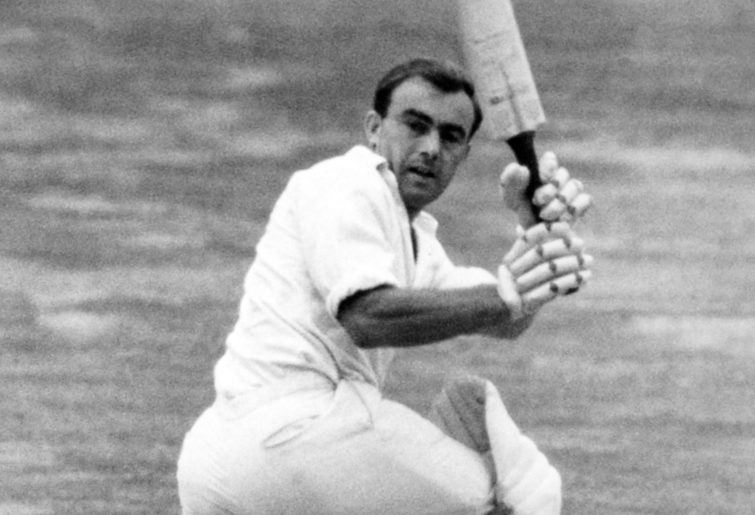 The response (noting that it was a long time ago and Smith is not a young man) was that there was little thought given at the time to the world record. The declaration came an over after Edrich had reached his 300, with a view to the dire weather forecast for the rest of the match. As it turns out, England took the last NZ wicket early on day five just before the rain came and most likely would have washed out the rest of the day. In that respect, it was different to the Warner match, which was completed with a whole day and a session to spare.

Legacy of Edrich’s innings
While I believe my thesis still holds, that declaring on a player in sight of the innings world record is a uniquely (and annoyingly) Australian phenomenon, it has been interesting investigating Edrich’s innings and sharing it with you readers. Particularly because it is an innings worth remembering. While it wasn’t a world record score, it was certainly an innings worthy of one and in fact it was the highest score in Tests for 25 years until Graham Gooch’s 333 at Lord’s in 1990.

And who knows what might have been for Edrich had the Yorkshire skies been clear during that Test. As it is, the innings is unchallenged as far as boundaries are concerned and certainly I was surprised how far ahead of more recent triple centuries by the likes of noted big hitters in Hayden, Chris Gayle, Virender Sehwag and Brendon McCullum it was.

So cheers to John Edrich – the true boundary champion of the triple centurions.