He’s proved he can score with either boot. His pace makes a mockery of his age. Pep Guardiola described him as exceptional when their sides last met.

But the harsh reality of top-level football is that it catches up with you in the end. As he approaches his mid-30s, Jamie Vardy will know deep down that he has his work cut out to stay at the top of the Premier League scoring charts.

Although with 23 league goals, and the golden boot, from last season under his belt, Vardy can allow himself a smile of satisfaction.

Should he look over his shoulder, however, then he’ll see some of the world’s top talent desperate to take away his crown. 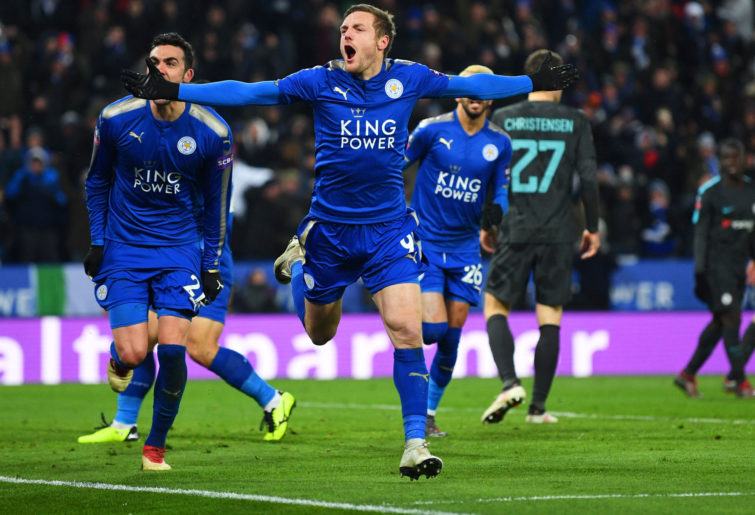 Gabriel Jesús
Manchester City like to score goals. They’ve scored 303 of them in the Premier League alone over the last three seasons, and with the likes of Kevin De Bruyne, Raheem Sterling and Gabriel Jesús in their ranks, they’re not going to stop any time soon.

The latter of that trio is the one that catches the eye in the golden boot stakes. Yes, Sterling notched 20 goals last season, but with Sergio Aguero looking more and more likely to retire as the months pass, Jesús is the chosen one: the prodigal son destined to fill his boots. His 14 goals this season – still a decent haul – have come with him flitting in and out of the team.

No Aguero makes him the focal point of the most prolific attack in the league. Watch this space.

Danny Ings
Many people wrote Southampton off after their 9-0 demolition at the hands of Leicester last October. The side were a sorry sight as they equalled the all-time record Premier League defeat, and star striker Danny Ings was hauled off at halftime.

Fast forward to January, however, and their recovery was complete. Their 2-1 victory at the King Power Stadium may not have been exact retribution for the thumping, but it exorcised a few demons – and who better to get the winner than Ings? The goal came in the middle of a fantastic 22 goals in 38 games, which included a goal past every team in the league, bar the Manchester clubs and, weirdly, West Ham.

Saints showed signs of improvement as the season drew to a close and manager Ralph Hasenhuttl’s high press approach seems to be turning them into a real attacking threat.

Back Ings to break the 20-goal barrier for a second season in a row and mount a serious challenge.

Mason Greenwood
When United came out blazing after lockdown, their youngest star was the one that shone brightest in United’s galaxy of attacking talent. Bringing great link-up play and deadly finishing to the side, his five goals in nine games helped them clinch a Champions League spot.

Is he ready to challenge for that prized boot, though? Well, if I extrapolate his goals-per-minutes ratio over a full 38 games, then that’s a 26-goal tally: enough to win him last season’s boot by a hat trick. That’s at the age of 18, and that was without assist king Bruno Fernandes behind him for a large part of it.

Many United fans feel that they have only scratched the surface when it comes to Greenwood. That is a frightening thought. Oh, and he’s listed as a midfielder on Fantasy Premier League. Sign him up and watch the goals come in.

Pierre-Emerick Aubameyang
Another prolific goalscorer somehow listed as a midfielder, Aubameyang has knocked in 22 goals in each of the past two seasons in a lacklustre Arsenal team. Arsenal are improving under Mikel Arteta, though, and with a new three-year deal in his pocket, we might see the Gabonese forward really hit his groove this season.

The Gunners are hoping he’ll be their talisman, handing him the captaincy and building their attack around him. Buoyed by the presence of the evergreen Willian alongside him, a settled Aubameyang could cause huge damage.

Sadio Mané
Living in Mo Salah’s shadow may get a little chilly sometimes, but Sadio Mané never shows it. He has virtually the same goals-to-minutes ratio as the Egyptian and is a key part of the best team in the league. Jurgen Klopp loves him, too, describing him as world-class.

You might ask why Salah isn’t on this list, but despite showing sparks of brilliance over the last year, his goal record seems to be on its way down since his remarkable 32-goal tally in 2017-18. Mané now shares the goal-scoring burden and an eye on overtaking him.

If Liverpool can hit the heights of last season, or anywhere near, then Mané will play a big part in that. At 28, he’s at his peak, with a ton of pace to go with his steely eye for goal.

Harry Kane
You might say Kane suffers under Jose Mourinho’s style of play. You might also say that his injury record will stop him from topping the list of goalscorers.

Whatever you might say, Kane remains the deadliest English striker around. If he can get a rapport going with Son Heung-min again, then there aren’t many better duos in the league. Kane can do everything: score 30-yard screamers, bullet headers or tap-ins as a Gary Lineker-esque poacher.

His slow starts are notorious, however, so he’ll want to get off the mark as quick as possible. A nice opening trio of games – Everton, Newcastle and Saints – offer him the perfect chance to do that, and once the Kane train is on its way, it’s hard to stop.

The battle for the golden boot is always tight, often going to the last game. Last season was a case in point, when Ings and Aubameyang fell one short of Vardy’s total on the final day. Next season promises much of the same, with many twists and turns along the way.

For many Premier League fans, it can’t come quick enough.