It’s been a tale of two careers for Tala Gray. Five years playing rugby in Australia and seven in France could barely have produced a starker dichotomy.

Stints with two Super Rugby franchises in his homeland netted him two caps. Yep, just two. Contrastingly, his time in France has yielded over a century of appearances, including significant contributions towards winning a major European trophy.

While France is Gray’s base now, rewind the clock 13 years and the big No.8 was one of Australian rugby’s most exciting prospects. Born in Auckland, before relocating to Melbourne with his family aged six, he grew up playing his junior footy alongside future Wallabies Ben Tapuai and Matt Toomua.

This trio of Samoan-blooded Victorians played Australian schoolboys together in 2007.

Gray’s impressive youth career spring-boarded him immediately into the full-time professional environment. However, once in it, the injury bug would bite him early and often.

“After finishing school as a 17-year-old I went straight to Canberra,” he says.

“I was with the Brumbies pro team for three years and in that time I had two shoulder operations and I busted my knee as well. Then in 2010 I played Australian Sevens and got injured again.”

Perhaps Gray was labelled ‘damaged goods’ at that point. In 2011, he played in the semi-pro Shute Shield with Eastern Suburbs but his line to the Aussie pro realm had gone dry. 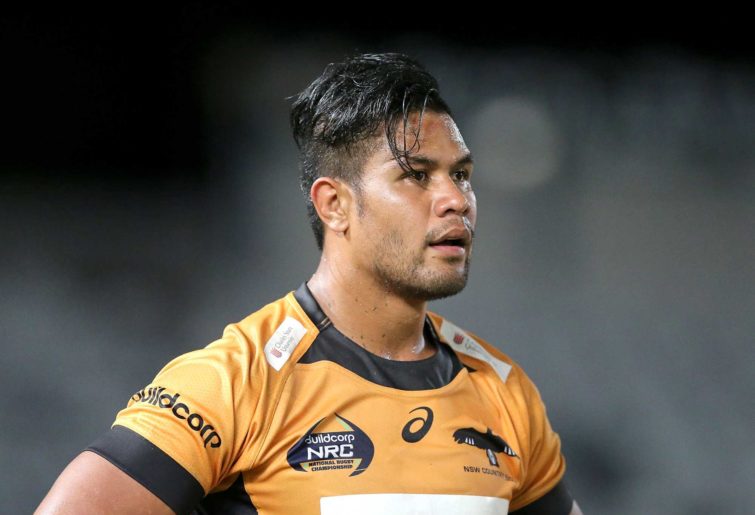 Tala Gray in the NRC. (Photo by Ashley Feder/Getty Images)

“None of the Australian franchises wanted to pick me up,” he says. “Then an option opened up at Biarritz.

“My agent said to me, ‘why don’t you get away for a season and come back?’ I didn’t have any other offers at that stage.”

Biarritz could have been Bucharest for all Gray knew. His destination-to-be was a complete mystery to him.

“I knew nothing about France,” he says. “I hadn’t even heard of Biarritz before!”

“I remember training down at Easts in Sydney and there’s this guy called Brad who’s one of the old guys at the club. He said to me, ‘mate, you’re going over to Biarritz? Where the legend Serge Blanco played!’

“I was like, ‘who’s that?!’ He had a look of shock on his face, ‘are you serious?’ Anyway, he showed me the videos and after that I was ready to go.”

Gray can be forgiven for not knowing the man also known as the ‘French Pele’. Blanc retired from his illustrious career with Biarritz and France back in 1991 – one year after Gray was born.

Biarritz (full name Biarritz Olympique) were one of France’s most successful clubs in the early years of professionalism. Between 2002 and 2006, they won three domestic titles before capturing the coveted Heineken Cup in 2010.

When Gray arrived on the scene around a year later, Biarritz were entering a period of decline. One that has since led to their relegation from the French Top 14.

But in 2012 they still had one final cup run left in them. Led by French veterans Imanoi Harinordoquy and Damien Traille, and ably supported by Aussie imports Dane Haylett-Petty and Gray, Biarritz advanced to the final of the Amlin (now European Challenge) Cup. Their opponents in the decider were emerging European supernovas, Toulon.

“They were a stacked team with guys like Gits (Matt Giteau), Jonny Wilkinson and Carl Hayman,” says Gray.

“We were leading by three at the end of the game and they’re lining up a dropkick to send the game to extra time. Everyone knew that as soon as they give the ball to Jonny he’s gonna slot it.

“Then a (Toulon) prop picked it up to go one more phase and he knocked it on. The ref blew the whistle and I jumped up into the air like crazy.”

Biarritz held on 21-18 with all of their points coming from the boot of scrum-half, Dimitri Yachvili. Thus in his first year on European soil, Gray had won a major trophy.

The Aussie appeared in 20 games all told that season, including 13 starts. It came as a welcome surprise to Gray, and most probably Biarritz, who had actually signed him as a development player.

“Originally I signed a one-year ‘espoir’ contract, which is one that you go on if you’re under 23,” he says.

“I ended up playing no espoir-squad games, just professional games. It worked out really well.

“I have to say it was one of the best times of my life. Coming from Australia as a 21-year-old you’re just chucked into the team and expected to play at a certain level. Lucky for me I did.

“Biarritz is also one of the most beautiful places in France and the people are real nice. It was amazing down there.”

With all going well, Grey signed on for a second campaign with the Basque club. Unfortunately, his second go-round did not go quite as well. He missed significant time due to a knee injury and Biarritz would not bring home any silverware. They finished the 2012-13 domestic campaign for the second straight season in ninth place.

That was the end of Chapter One for Gray in France. Unfinished business down under led to him signing with the Waratahs for the 2014 and 2015 seasons.

“Going home, my goal was to try and play for the Waratahs then, if good enough, for the Wallabies,” he says. “As a kid I always wanted to play for Australia.”

However, getting his hands on a sky-blue – let alone a green and gold – guernsey proved a formidable challenge. The Tahs were then loaded with quality loose forwards who kept Gray off the team-sheet for all but a couple of games.

“I was unable to get a crack because they were all playing so well. That’s no one’s fault. You can’t blame somebody for being in form.”

“Cheik (Michael Cheika) had his 15 and that was fair enough because that team went on to win the championship in 2014. Why fix something that’s not broken, right?”

Little changed the following season. Gray trained hard and kept pressing for selection, but just could not force his way in. With opportunities limited in Australia, he returned to France to try and resurrect his career with iconic club, Stade Toulousain (Toulouse).

“Toulouse is like the home of rugby here in France. The people are just rugby-crazy, it’s unbelievable!” he says.

“I was pretty lucky to play for a team with so much history, achievements and awards. I also made some lifelong friends there, which is why I play rugby.” 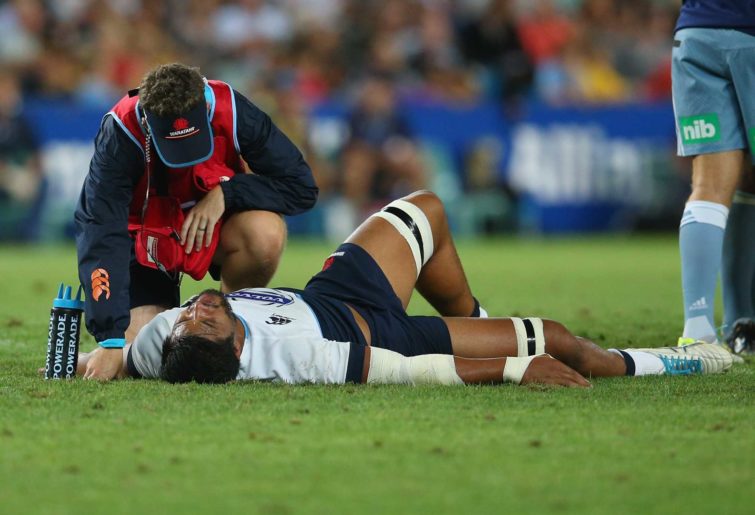 Tala Gray with the Waratahs. (Photo by Mark Kolbe/Getty Images)

Toulouse would not add to their (at the time) 23 major trophies during Gray’s three-year stint. They did crack the postseason twice (2016 and 2018) but were bounced each time by the team that ultimately won the title (Racing 92 and Castres).

If Toulouse are France’s most successful rugby club, then Stade Francais are the second-most. Their haul of 14 domestic titles trails only Toulouse.

The Paris-based club is where Gray now earns his keep. In his first campaign there in 2018-19 they finished a middling eighth.

Last season was shortened due to COVID-19, and lucky for Stade that it was. They were 14th when the pandemic prematurely shut the competition down. But with no relegation or promotion in French rugby this year, Stade will stay in the top tier for the upcoming season. Gray is confident they would have avoided the drop had the season not been cut short.

“Technically we were saved by the virus but I like to think we were on an upward trajectory when the season was suspended,” he says.

“We had a pretty rough start last year with our coaches getting fired, meaning we had to work things out for ourselves a bit. But I feel like we were just getting our groove back.

“The team we had were unbelievable. There was just no one there to gel us together. Anyway, we were saved. No pressure after that.”

Gray will be remaining in the pink and blue jersey for at least a couple more seasons having signed a two-year extension, with an option for a third, earlier this year.

Post-Paris, matters will depend on how Gray’s rig is holding together. While a return to Super Rugby is not on the cards, one more crack in Aussie club rugby is a possibility.

“One of the things that I really want to do is get back and play again for the Beasties at the end of my career,” he says. “I love that place and that area in general. I’ll definitely go back if my body allows me.”

That would give Talaleili Gray’s rugby story a sweet symmetry. A fantastique French experience sandwiched in between twin stints with Easts.

That’s notwithstanding his earlier period with the Brumbies. While frustrating at the time, he now views his health battles there as serendipitous. If not for that misfortune, the joys of living and playing in France may never have happened.

“It’s been an awesome experience and I feel blessed to be here,” he says. “Because of those injuries early in my career it forced that decision to come over to France.

“That was probably the best decision I made because now I’m in this position. I think the gamble paid off.”

And the numbers (see below) support that. Faced with the choice of stick or twist, he pulled the perfect card to maximise his chances of achieving a fulfilling pro rugby career abroad. The rest is history.