After playing only three games at AFL level the key forward/ ruckman made the move to cross-town rivals Adelaide in the 2019 trade period.

The Crows obviously saw something in the 23-year-old or otherwise would not have given the Western Australian a three-year contract.

Crows General Manager of List Management and Strategy, Justin Reid, was excited by the new acquisition.

“We have been watching Billy for awhile now and we believe he can have a real impact with us over the years to come. Whether it’s up forward or helping out in the ruck, Billy will add some real competitiveness to the team”

The Crows sit bottom of the ladder without a win in 13 and surprisingly Billy Frampton has only played four games at senior level in 2020.

Goal kicking woes
When a team is performing well it can be difficult for fringe players to break into the senior side. The Adelaide forwards collectively have struggled for the most part. Ranked 18th in the competition for scoring, averaging only six goals per game.

In his last game at AFL level Frampton kicked a goal against West Coast in Round 6. In isolation it does not sound like much, but it did make up 20 per cent of Adelaide’s goals for the match.

The former Port player has not been seen at AFL level since. 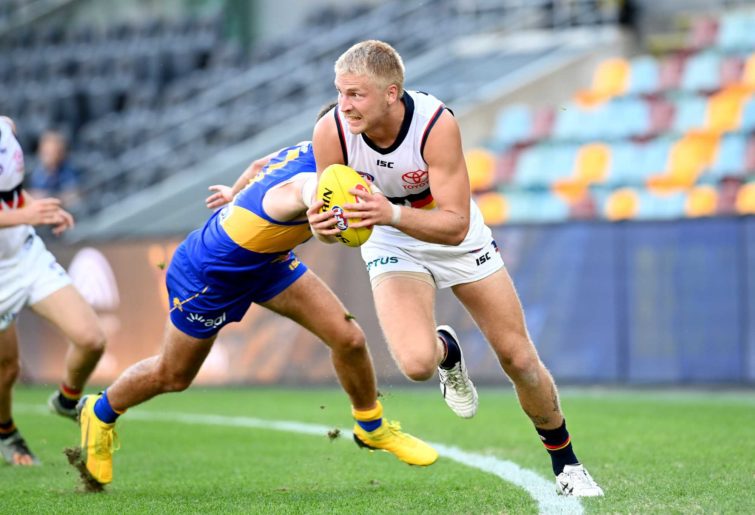 Billy Frampton of the Crows (Photo by Bradley Kanaris/Getty Images)

The selection battles
So how are the other key forwards faring for Adelaide?

Former Captain Taylor Walker has come in for some unfair criticism on occasion but is clearly struggling. This is statistically the lowest output of his career and a return of one goal from his last four games.

The 30-year-old has been a wonderful player and last week celebrated his 200th game. Despite being under contract for next year, the much-loved Crow has admitted some conversations on his future will transpire at the end of the season.

Darcy Fogarty is someone the Crows have pinned great hopes on. Five goals against West Coast last year got many excited but the 20-year-old is still finding his feet at AFL level.

The youngster was dropped for the recent clash with the Western Bulldogs. Crows Head of Football Adam Kelly revealed on SEN radio the key forward had been asked to work on his fitness.

It must not have taken long for those fitness issues to be resolved. Fogarty was straight back in the team against Geelong last week, but the season has been an underwhelming one to date with a return of four goals from six matches.

Elliot Himmelberg another forward tying to solidify a position in the Crows side. The 22-year old has had some good moments but has been largely ineffective with five goals for the season from seven games.

By no means is Billy Frampton the next Lance Franklin but it is hard to fathom he could not contribute more if afforded the same opportunities.

At the very least some extra support for Reilly O’Brien who has largely been a one-man band carrying the ruck duties.

Crossroads
I recognise Frampton can be a frustrating figure. Even at SANFL level last year we often saw the best and worst. A great mark or goal quickly followed up by giving away a dumb free kick that would leave you flabbergasted.

The one thing that Billy Frampton does provide is a physical contest. A combative nature that would serve Adelaide well given their current predicament.

The Adelaide coaching staff have obviously identified issues in the 23-year old’s game that have seen him continually overlooked for selection.

Hopefully for Billy Frampton he can gain the trust of his new club otherwise that three year deal will be under severe scrutiny for a club that already has enough question marks on its list management.

Adelaide Crows players Brad Crouch and Tyson Stengle have been caught with illicit drugs and face fines and possible suspension from the AFL.