When India’s richest man, Mukesh Ambani, bought the Mumbai Indians before the inauguration of the IPL in 2008, there were high expectations. But money doesn’t always translate to success.

In the first two seasons, Mumbai failed to qualify for the semi-finals and fell at the final hurdle to rivals Chennai Super Kings in the 2010 final.

By the end of 2012, the city that had produced so many cricketing superstars failed to win a tournament.

In the 2013 edition, the Indians went after Aussies during the auction, signing Glenn Maxwell, Nathan Coulter-Nile, Phillip Hughes and the legend that is Ricky Ponting.

Named as captain, Ponting was slotted into the playing XI as one of the four overseas players. However, scoring a mere 52 runs at an average of 10.4 and a strike rate below 70, Ponting found himself woefully out of form.

While Mumbai were in a decent spot after six games, with three wins and three losses, Ponting was likely to be dropped – and Ponting does get dropped.

So the former Aussie skipper dropped himself, rather than the Mumbai management taking the decision.

With Sachin Tendulkar, Harbhajan Singh and Kieron Pollard in the team, surely one would become the new skipper, right? Wrong.

Ponting called in Rohit Sharma and boy would this decision pay off!

Under Sharma’s captaincy, Mumbai went on a five-match unbeaten streak, finishing in the top two of the group stages. From there, the franchise won their maiden IPL title, defeating Chennai by 23 runs.

Come 2020, Mumbai are defending champions for the fourth time – no other franchise has won as many tournaments.

Ponting came back as head coach in 2015 and despite losing five of their six opening games, the Indians won nine of their next ten and secured their second title – Ponting becoming the second person after Darren Lehmann to win the IPL as a player and head coach.

The side has kept a core group – including Sharma, Pollard, Jasprit Bumrah, Lasith Malinga and brothers Hardik and Krunal Pandya – for a long time, have a professional scouting system, and have some of the best coaches and mentors for each skill set.

But Ponting’s selflessness has played a vital part in this T20 revolution.

He could’ve remained as captain and played on for the cash, but he is a winner and so stayed out of the XI to be a part of a winning side.

The confidence he instilled in Sharma – who wasn’t an established player in any format at the time – shouldn’t be forgotten. Not only has Sharma captained Mumbai to four titles, the superstar has captained India to two championships (2018 Nidahas Trophy and 2018 Asia Cup) in Virat Kohli’s absence.

A lot of credit dates back to April 2013, when a man from Tasmania backed Rohit Sharma to lead the Mumbai Indians to glory. 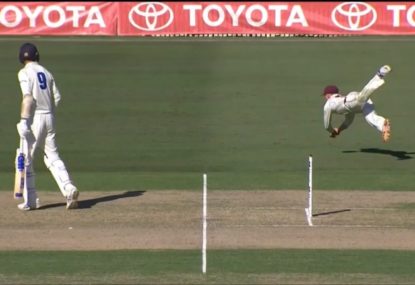