A reminder, these are players that I have seen play live or on TV, so from roughly 1990-onwards. As such, there is a recency bias at play here.

I have no doubt that I will have missed out on some wonderful contributors so apologies in advance.

Bryan Habana
One of those players that every time he got the ball in his hands you just felt like something was going to happen.

Of course people remember this man for the Super Rugby final where he snatched victory from the jaws of defeat, but me? I remember a Test match against the Wallabies in a ‘home game’ for the Boks in Perth in 2005.

Habana scored two incredible long-range tries and the second really broke Wallaby hearts as they were in the lead and on the attack but then spilt the ball. Quick as a flash the Boks passed the ball out to their main man and he raced 80-odd metres to score.

It was the Boks’ first victory in Australia since 1998 and an incredible performance.

Victor Matfield
When I think of the great second rowers, this guy is right up there. I’m not sure I have ever seen a player lodge themselves inside another’s head as well as Matfield found himself in the opposite hooker’s. He seemed to know where they were throwing before they did!

If you have ever had the privilege of hearing this man speak, he comes across as incredibly intelligent and insightful, with an encyclopaedic knowledge of rugby.

Some career highlights were captaining his nation to a victory over the All Blacks, which was the latter’s first loss on home soil since 2003. He was also man of the match in the 2007 Rugby World CWorld Cup final.

Was incredibly close to taking up a coaching role with my Waratahs in 2015 but he unfortunately declined.

An extremely likeable and humble man and someone I would be extremely proud to say captained my team. 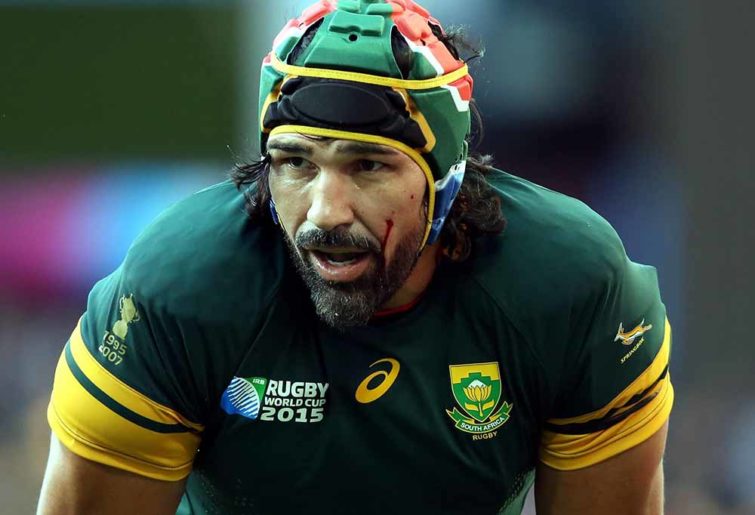 Schalk Burger
There are many things I admired about Schalk: his blonde mop and almost refusal to get it cut, his physicality, his dedication and passion to any team he played for, his drive and will to win.

For me though, his complete lack of self preservation was his outstanding quality.

I had the privilege of watching him early in his career and even as a raw-boned 21-year-old, you couldn’t help but be impressed. Coming from a rugby family, his dad was a Springbok, he certainly would have had the pressure heaped on him from a young age.

Nominated for IRB Player of the year in only his second year of international rugby and winning the award tells you the level of this guy. He was also a two-time winner of the SA rugby player of the year. Think about the greats he played with during that time and he won the award twice!

The way he hit his opposition in rucks and mauls was to be applauded. He was rugby’s values personified, a hard man on it and a gentleman off it.

Bismarck du Plessis
When I think of Springbok forwards and their qualities, I turn to this guy.

You can’t help but admire the physical specimen that is Bismarck. An absolute monster who would frighten the living crap out of anyone in a dark alley!

Du Plessis had to bide his time but when he was finally given the opportunity, wow, what an impact! With bone-crunching defence and always making the tough carry, he also had an underrated attacking element to his game.

His real strength however was his strength over the ball. If you missed him on the first cleanout, he was nigh on impossible to dislodge.

With brother Jannie (a qualified doctor no less) also an accomplished player, one can only imagine the backyard games these boys played growing up – as well as the food bill in their house! An absolute legend and a pleasure and privilege to watch.

Joost van der Westhuizen
This man is deserving of his own article but I’ll leave that to more accomplished writers.

When I first started following rugby, my Dad always told me about two players: a freak of nature from New Zealand the likes of which we will never see again (I’ll leave you to work that out), and Joost.

Dad would get so excited and a bit emotional (he is Welsh after all) when talking about Joost. It was not until you saw this guy’s brilliance I realised how correct the old man was.

Joost was unusually tall for a scrumhalf, standing 6’2″, but he used every inch of that frame with some incredible defence. What’s moer, until recently he was the nation’s leading try-scorer – as a scrumhalf!

Without a doubt though his greatest asset were his top two inches. Joost was one of those players who always had time and took the right option. His darts down the blindside were the stuff of legend.

Sadly, with his death in 2017 to motor neurone disease, he is no longer with us and a little bit of rugby died with him. An absolute legend, Joost is possibly the finest scrumhalf of all time.