It sounds like a professional wrestling entertainment event, doesn’t it? Fire up the lights and let the customised music play. In the blue corner, a proven champion in ‘Triple A’, Allan Alaalatoa. In the red corner, his vast young challenger, Tongan Thor.

On current evidence, the champion will do well to defend his title. Strip away the glitzy melodrama, and what do you find? These two props are so far ahead of all their rivals in Australia that the only remaining desire can be to field them both in the same starting team, together.

In this article a few weeks ago, I looked at the credentials of the two players outside the scrum. So how do they compare in their core role at set-piece?

The last two rounds have offered a heaven-sent opportunity to compare scrummaging styles against one of the most experienced looseheads in the Australian game, the Western Force’s redoubtable Pek Cowan.

One of the great positives of the inclusion of the Western Force in Super Rugby AU has been the opportunity to absorb the knowledge of seasoned veterans like Cowan, Kieran Longbottom, Jeremy Thrush and Greg Holmes back into the domestic game. Three of those four have played in the English Premiership and mixed it with the best in both hemispheres.

Pek Cowan is what is known in the game as ‘a tidy operator’. The translation from front row speak is that he has been around the block and done his due diligence. He is experienced enough to know most of the answers to the questions posed by an opponent, and he provides an excellent litmus test for any would-be Wallaby in 2020. Players like Cowan are the gate-keepers to international rugby. Get past them successfully, and you know you are in business.

On the Reds feed to the scrum, Taniela Tupou knew he was business right from the start of the match. 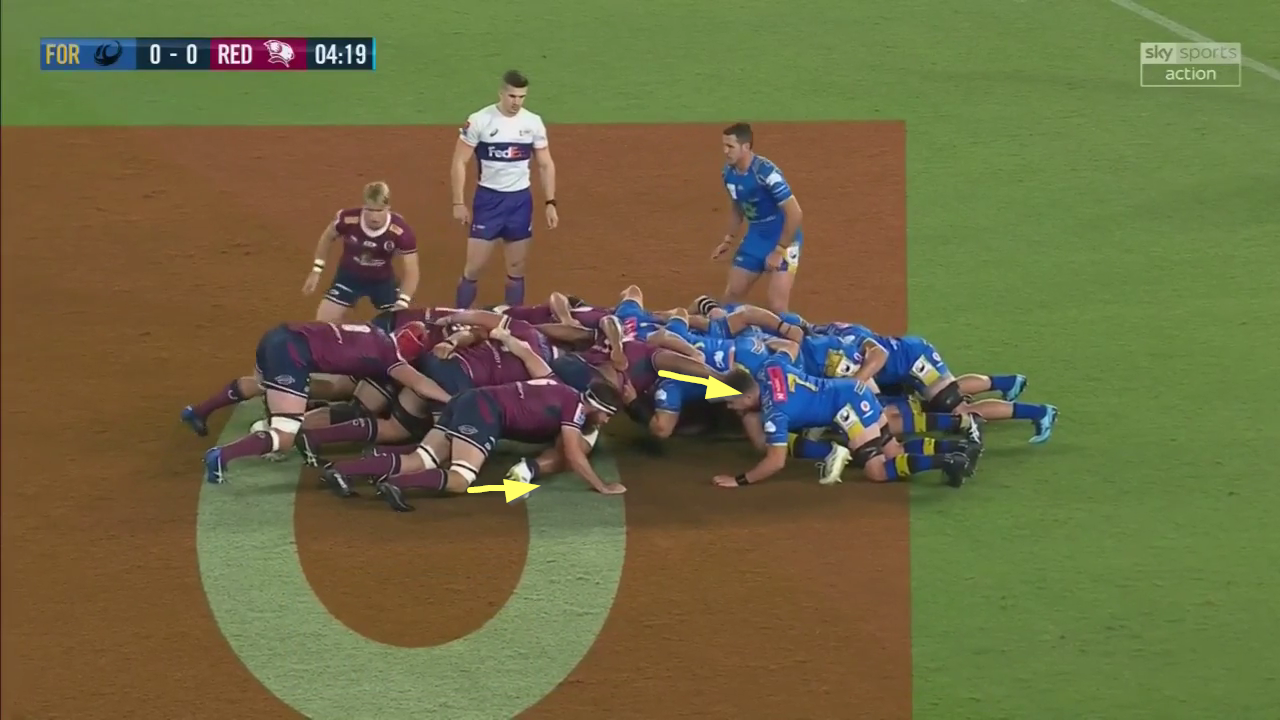 At this, Queensland’s first put-in of the game, Tongan Thor looks completely comfortable. The tell-tale flag is the length of his outside bind. His right arm is still reaching out towards Cowan’s left hip, and he does not need to use it to squeeze the loosehead down and keep him under control.

Tupou’s feet are directly underneath his centre of gravity and he is well-balanced. This Reds scrum does not budge, not even an inch.

The contrast with the Brumbies’ first feed of the game was notable.

The set-piece close to the Ponies goal-line is anything but stable, and Cowan ends up literally on top of Triple A. It is fair to say that Cowan came out on top in his individual battle with Allan Alaalatoa during the first period.

The Force front row wins a penalty at this scrum when the Brumbies lose concentration, thinking that referee Amy Perrett has called for the ball to be released.

There are at least two ‘permissible illegalities’ on the camera-side of the front row, with Longbottom dropping his bind to destabilize James Slipper, and the flanker on his side (Fergus Lee-Warner) sliding up to make a fourth prop on the unfortunate Slipper’s outside shoulder! But ultimately, the officiating get-out clause in the midst of this kind of chaos is to reward the side going forward – and the Force are moving forward on both sides.

Like any top prop, Allan Alaalatoa came back strongly in the second period, and his duel with Pek Cowan finished roughly even. Unlike Taniela Tupou, he depends on the work of his outside bind to manage his opponent. 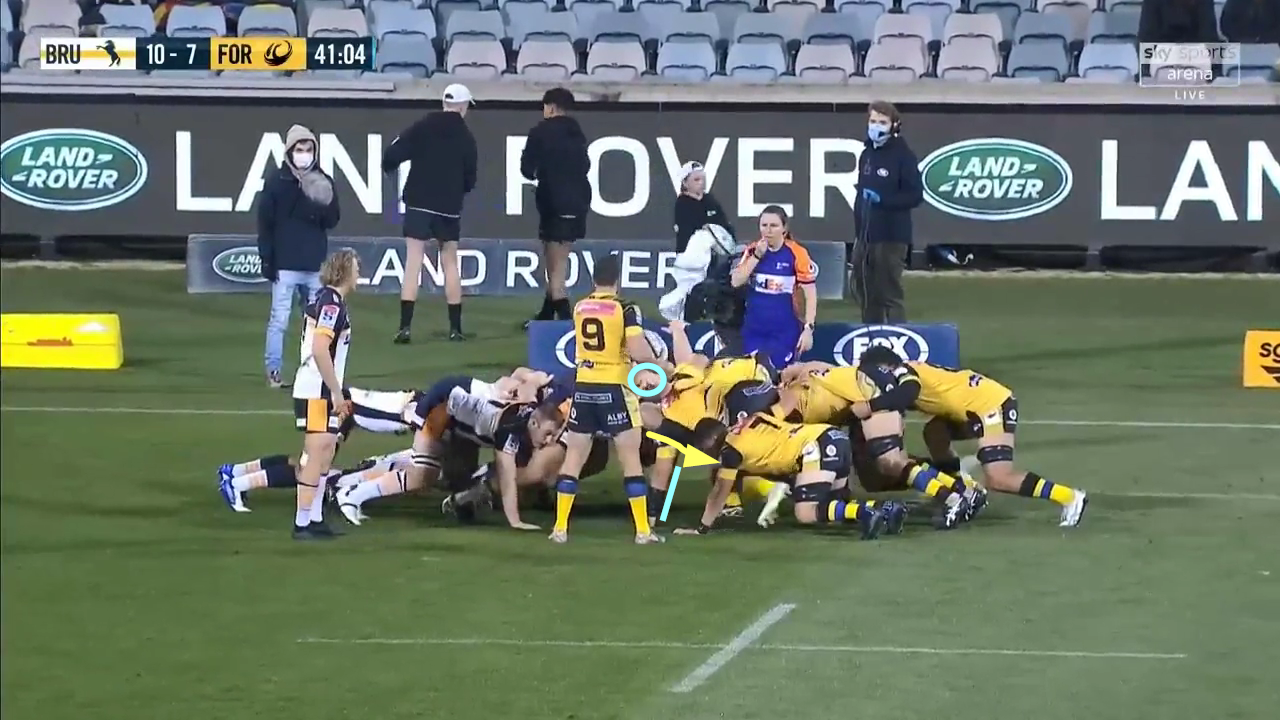 In this instance, AAA has clamped Cowan with a vice-like ‘farmer’s arm’. The Force loosehead is being squeezed and cannot even reach up to make a bind with his left arm. Inside him, hooker Andrew Ready is likewise searching desperately for a spot he can grab on to, and he has not found it.

At his best, Allan Alaalatoa can be a dynamic force on the tighthead.

The work of Triple A’s right-arm bind is key to the tighthead’s effectiveness when he wants to promote his own side of the scrum. Alaalatoa stays square and steps out on the opposing loosehead – his first step after the feed is out to the right, and only then forward.

The technical picture becomes even clearer when compared with this scrum against Karl Tuinuku’afe from the good old days of Super Rugby 2019.

Allan Alaalatoa diverges strongly at ‘set’ from Taniela Tupou. Although he is only listed at two inches taller, his body-shape belies a radically different technique. 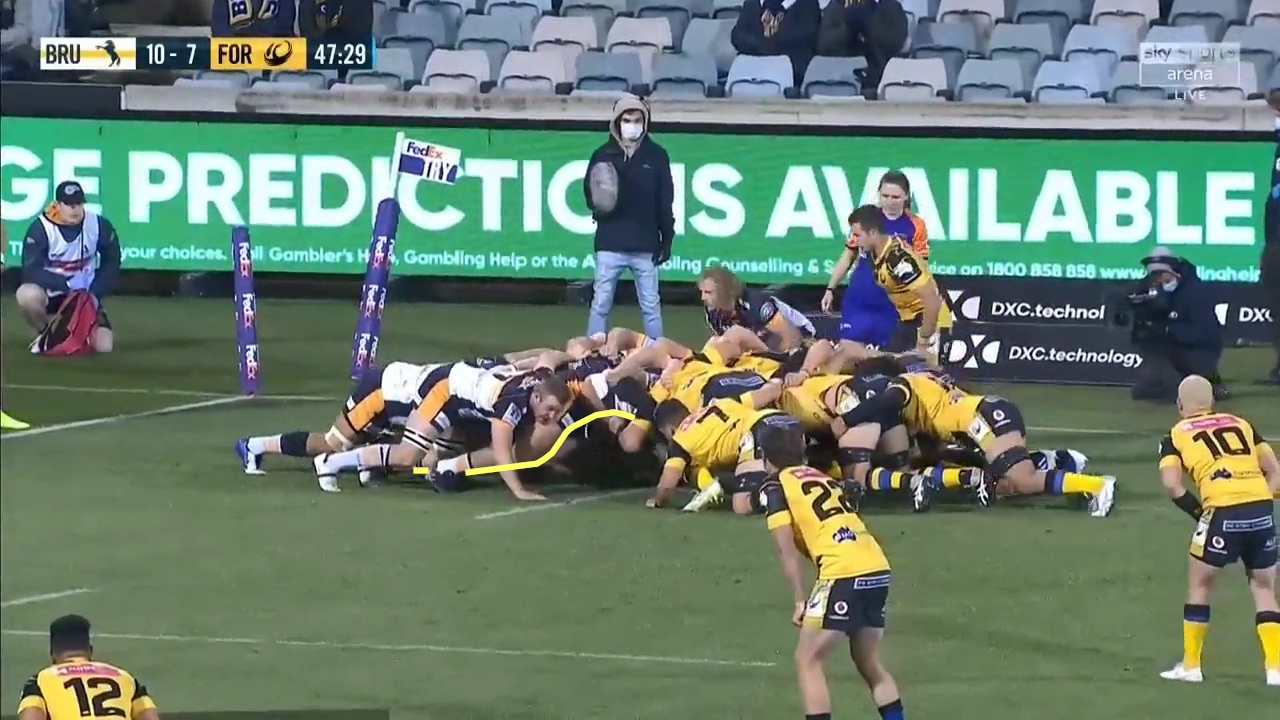 Triple-A is much longer in the body, and his feet are much further back than Tupou’s. In the first screenshot, Tupou’s feet are well ahead of the knees of the flanker on his side (Liam Wright), while Alaalatoa’s are roughly level with Will Miller’s.

It is the compactness of Tupou’s physique, and his ability to take on the gap between loosehead prop and hooker, which sets him apart as a threat on the opposing feed.

As Cowan began to tire towards the end of the first period, the Tongan Thor went to work.

On opposition ball, Tupou pulls his bind back on to the arm after the initial set to get maximum purchase. Pek Cowan is really struggling to resist the pressure and hold the scrum up, with his left elbow sagging a few inches off the ground. Even though the Force clear the ball, he ends up on the floor and the dam has sprung its first leak.

Taniela Tupou is legitimately targeting the seam between Cowan and his hooker Ready. He starts low and then stands up in the gap, busting the bind between the Force number 1 and number 2. It is sometimes known as the ‘dolphin’ technique, and only the very strongest of tighthead props can perform it successfully. 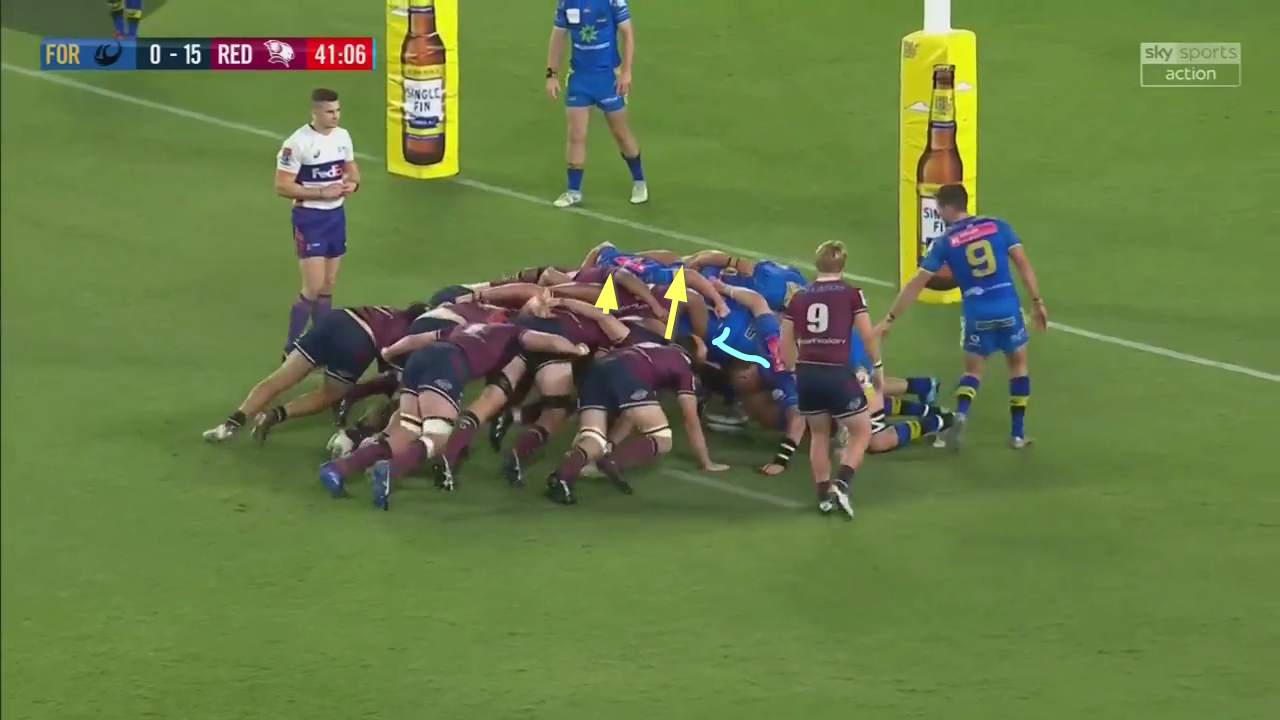 Tupou went on to repeat the dose in the second half as Cowan began to unravel.

The impact of such a dominant set-piece is that it leaves an indelible imprint on the referee’s memory, and any future doubt is resolved by penalty in favour of the side in the ascendant. The Reds won three rapid-fire scrum penalties in the next five minutes after this scrum was set. The cascade became a torrent.

These little victories were an echo of what Taniela did to James Slipper on the last occasion that the Queensland Reds took on the Brumbies.

There is the same inward angle, and the same pressure on the Brumbies’ hooker (Connal McInnerney), forcing the rake out of the top of the scrum. On the first occasion, the referee gives the Brumbies the benefit of the doubt and asks for a reset. In the second instance, he is not so generous and awards a penalty to the Reds. The perception has changed, permanently, because of Taniela Tupou.

Summary
There is no doubt that Allan Alaalatoa has re-invented himself as a very good practitioner at tighthead in the scrum. He understands his role within the unit, and what his body can and cannot achieve in the position.

The suspicion remains that he is physically better suited to the other side of the set-piece, however. He is naturally ‘long’ in the leg and depends on a heavy outside bind to manage his opponent successfully.

By way of contrast, Taniela Tupou is a very natural fit for the no.3 role. He is more compact than Triple-A and better able to keep his feet underneath his centre of gravity. He has the power to change his angle and take himself into those deadly clashing rocks between the opposing loosehead prop and hooker – and not only survive, but thrive.

If you can do that, you can go an awfully long way to destroying your opposition’s will to compete, and influencing the referee’s perception of relative strength and weakness in the physical aspects of the contest.

Allan Alaalatoa and Taniela Tupou are the two best props in Australia by a long chalk. The problem is getting them on to the field at the same time. Add in Scott Sio as your bench loosehead, and the issue becomes one of finding that fourth prop to round out the match-day squad and spell the Tongan Thor.

Solve that one, and you will have cut one of Australia’s Gordian Knots at set-piece with one flashing sweep of the blade.