Barty pulls out of French Open

World No.1 Ashleigh Barty will not defend her French Open title in a massive blow to the grand slam event.

Uncomfortable about travelling during the coronavirus pandemic and with her preparations hampered by COVID-19 restrictions in Australia, Barty is the biggest name to opt out of the major which is set to start in Paris on September 21.

“It has been a difficult decision to make but unfortunately I will not be competing in Europe this year,” Barty said in a statement on Tuesday.

“Last year’s French Open was the most special tournament of my career so this is not a decision I have made lightly.”

The 24-year-old said there were two reasons behind her decision – the health risks as well as her limited training without coach Craig Tyzzer “due to the state border closures in Australia”.
Barty had already skipped the US Open, along with Australian men’s star Nick Kyrgios, and hasn’t played since the Doha semi-finals in February.

She said she planned to continue training at home in Queensland to prepare for the summer of tennis, with the Australian Open still scheduled to go ahead in Melbourne in January.

“I now look forward to a long pre-season and the summer in Australia,” Barty said.

“It has been a challenging year for everyone and although I am disappointed on a tennis front, the health and wellbeing of my family and my team will always be my priority.

“Thank you to my fans for your continued support, I can’t wait to play for you again.” 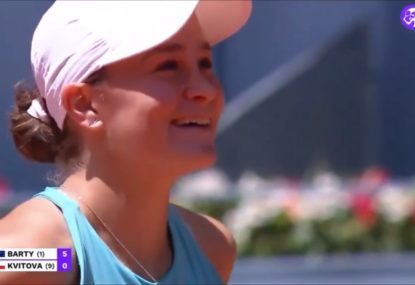