Reviewing the season of the world's richest player

Prior to the World Cup in 2019 Handre Pollard signed a contract that made him the highest-paid player in the world for 2020.

He has certainly been a standout for Montpellier, and that is no surprise considering his performance last year.

But just how good was he? Is he worth the salary?

He has played multiple games, with two Heineken Cup matches against the franchises Brive and Connacht, while multiple others have come in the Top 14.

He may have underwhelmed in the Top 14 debut against Racing 92, but he has bounced back in form.

Defensively he has not been the outstanding try-saver some other players are, but he has made some tackles that might have stopped tries in the corner. He has missed some tackles, as players always do, including even a mean tackler like Pollard.

He’s made one good cover tackle against Brive, grabbing down the player and eventually stopping him, but the ball was offloaded. He has missed several cover-tackle attempts, but overall defensively he has had a decent performance.

His attacking gameplay is extremely noteworthy.

Even in his poor game of the Top 14 debut he set up a try with a brilliant pass for a teammate to waltz in and score.

Against Brive his first touch on the ball was a pass to a second-rower, but the man was fouled, resulting in Pollard getting a free shot at goal, which he took with pleasure. A play close to the line with Pollard taking a chance at waltzing through with a dummy and some footwork was fouled by a no-arms tackle.

He was in better form against Connacht in their other Heineken Cup game. His cross-kick halfway through the 29th minute came with a lovely bounce for a teammate to regather and put in a grubber to score the try. The break from his kick opened up space for the grubber kick.

Later on in the game he slotted in as first receiver, taking the ball, spotting a gap and slicing through, cleanly breaking one tackle. Another defender caught up to the sidestepping flyhalf as he passed it on to another player. He came back in as support and secured the ruck that was the platform for another try by Montpellier.

Against Stade Francais he caught the defenders sleeping, With a penalty on the five-metre line Pollard went for a quick tap, diving over the line to secure another try, spotting the passive defence and trying it. 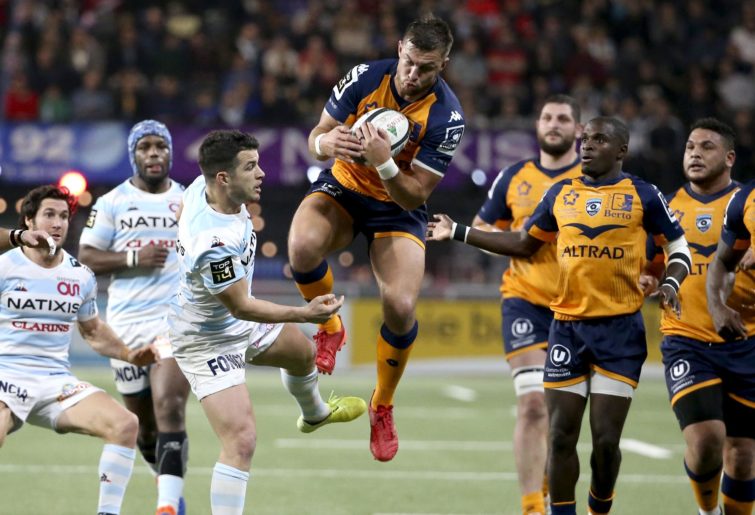 He was instrumental in the first try against La Rochelle. His kick-off went deep and La Rochelle booted it back. Pollard caught the ball and engaged the line with some footwork, cleaving through the line. As a defender closed him down, he fired out the ball with his trademark deadly flat pass to the wing. An inside pass from there sealed a try.

A second direct try assist for Pollard came later in the game. With a ruck just inches from the line, the ball went through Frans Steyn’s hands and then to Springbok teammate Handre Pollard. Pollard ensued another flat pass going slightly diagonal to pinpoint the ball into the hands of the Montpellier fullback for yet another try.

With the reopening of the season in September, his latest game against Pau was solid in attack. After the power cut and another Pollard penalty, he was firing as a playmaker. With the ball coming into his hands, he made a shot running line before grubber-kicking the ball past the defensive line. A brilliant bounce evaded the hands of the Pau winger trying to gather the ball and sent the ball into the hands of teammate Ngandebe. The inside pass to Montpellier flanker Camera was the try-pass.

Onto his kicking and other than his mediocre first, Pollard made it clear to opponents that his boot would make indiscipline costly. Each time he faced a hard kick his nerves of steel slotted it in. Pretty much every game has been rock-solid from the boot for Handre Pollard. Steyn, a goalkicking brilliance, has stepped up at the tee sometimes. The rotation between two metronomes has benefitted Montpellier.

So, has he been worth it?

Montpellier right now are stuck in eighth, exactly where they were last year.

They are behind a whole host of teams that boast internationals. Clermont have the Fijian Peceli Yato, Bordeaux-Begles have Semi Radradra, Racing 92 has Finn Russell and some French stars and Stade Toulousain has Springbok star Cheslin Kolbe along with halfback pair Antoine Dupont and Romain Ntamack.

Under Xavier Garbajosa, Montpellier are still where they were last year. However, last year they were with solid playmaker Aaron Cruden. Bringing Handre Pollard has more than made up for his absence but he has not pivoted Montpellier to the top.

At this point of the Top 14, has Handre Pollard been worth his salary?