Good Aussie locks are always in high demand overseas. At least a half-dozen Wallabies second-rowers are currently doing their business for clubs based abroad. Another one who could have or perhaps should have been a Wallaby, Hugh Pyle, also plies his trade in a faraway land.

It was 2014 when Pyle last sunk his studs into an Aussie rugby pitch. He was then in his fourth professional season all spent with the Melbourne Rebels. Pyle had been early stalwart of the then-fledgling Super Rugby franchise becoming their second player to reach 50 caps.

But chances for him to step up and represent his country proved elusive. Though it was not through lack of trying.

Pyle had been banging hard on the international door from as early as 2013 when a fine Super Rugby season had propelled him into contention for the June Tests. However, an untimely injury kyboshed his chances of selection.

“I did my shoulder (in Round 16) against the Reds, which was the day before they were choosing the players to participate in the Lions tour,” he says.

“Then the next day they told me that I was going to be one of those guys. That was pretty tough. I chose to have a quick surgery and hopefully have a shot at the next squad.”

That would be the Rugby Championship series later that winter. Pyle did manage to get back on the pitch for the Rebels just in time to be considered.

“I think I played one Super Rugby game then got chosen in the 40-man squad,” he says.

“But three or four days later I got cut. I remember sitting in that meeting thinking that 2013 had probably been my best year of rugby to date, and they said that I hadn’t done enough. The only feedback I got was that my hands weren’t quick enough in the lineout.

“I became disenchanted. This is what I’d been working towards for three years and just to step away from that was pretty disheartening.”

After being overlooked by the Wallabies, Pyle would carry on for one more season with the Rebels. The Melbourne side underwent a change of management, with Andrew Hill moving on and Tony McGahan taking over the reins as head coach. Pyle did not find this development favourable.

“At the same time I was 25 and all my friends were into travel and moving around. I was also a bit stagnant in life.”

With a high value always placed on tall, athletic rugby players from Australia, Pyle was never going to be short of admirers from afar. One person whose eye he’d caught was Stade Francais boss Gonzalo Quesada.

“I remember calling him from my apartment in Melbourne and asking, ‘Why do you want me to come to Paris? Why should I move across the world to come join your team?’,” he says.

“He was like, ‘I like what you do around the field. You’re not a French lock. You’re not the kind of player that we have here. I’m going to bring you over and let you do what you want to do, not put you in a box’.” 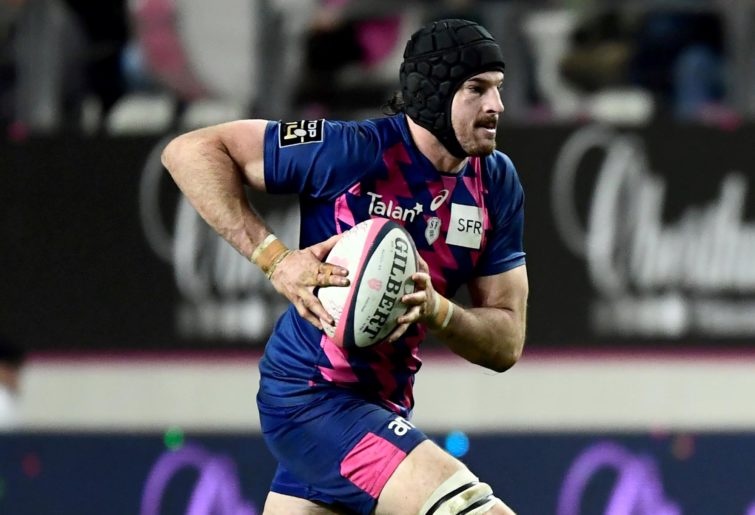 Pyle’s interest was piqued. The chance to play in a supportive environment, be based in one of the world’s premier capital cities and earn some sound Euros combined to conduct a sweet symphony inside his head. That, as well as discontentment with his situation at home, was enough to sway his decision to switch hemispheres.

Stade would waste little time putting their new property to good use. Over the course of his first season in French/European rugby Pyle made 30 appearances, including 24 starts.

Stade would win 21 games in all competitions (including finals) that campaign. For Pyle, it was a matter of time moving fast when you’re having fun.

“It was an absolute blur,” he says, “but I always joke that I won more games in my first year at Stade than I did in four years at Melbourne.”

It gets even better. Having finished the regular season in fourth place, Stade were then expected to exit the postseason quietly, with Toulon and Clermont the more fancied teams. That was not how it panned out.

Stade caught a winning disease which they did not shift. They dispatched Racing Metro then Toulon in the quarters and semis respectively before meeting Clermont in the final.

“I think the last time we played Clermont before then they put 60 on us,” says Pyle. “I didn’t think we were going to win.”

But win they did. Stade were never headed in this tight but titanic battle, triumphing 12-6 in front of 79,000 in Paris. It was a huge moment personally for Pyle.

“I remember when the final whistle went my mind just switched off because I couldn’t handle it,” he says. “It was almost too overwhelming.”

The Aussie was on the sidelines at that point, having been subbed off in the 26th minute due to a rib injury. He had been replaced by Pascal Pape, the 65-test French veteran, whom Pyle had impressively kept out of the starting side.

Despite Stade not threatening for another domestic crown over the ensuing five seasons, Europe was another matter.

In 2017, just as they had done two years earlier, the men in pink and blue came out of nowhere to contest a major trophy. This time it was the European Challenge Cup in which they qualified for the knockout stages after scraping in as eighth seed.

Pyle and company firstly bounced top-seeded Ospreys in the quarters, then Bath in the semis – both on the road – before facing Gloucester at Murrayfield in the final. Stade proved too good again in this decider, winning 25-17. Pyle believes entering the finals once more as underdogs had a positive effect on the team psychologically.

“We didn’t expect to win anything, which can be really good,” he says. “You don’t have the pressure on yourself or the team. You play more light-heartedly.

“Possibly what happens with, say, Clermont for example – who’ve had so many finals runs when they’ve been the absolute dominant team – is that when they get to the final the amount of pressure on them, I feel, would be overwhelming.

“Whereas with our finals runs we never had that. We could just play how we wanted to play and it worked it for us.”

The next season was a stinker for Stade. They dropped 17 of their 26 Top 14 games to finish 12th. Pyle tallied another 23 games, which turned out to be nearly double the amount he played the ensuing two campaigns combined (13).

A pair of knee surgeries were to blame for this. His side did not fire too many shots while he was (mostly) absent, finishing eighth then 14th.

Stade and Pyle then parted ways after the suspended 2019-20 season. Having played so little in recent seasons, Pyle was worried that he might slip through the rugby cracks.

“I was not sure how things were going to go,” he says. “Two surgeries in two years with the second one this February. I had been in confinement in my tiny apartment with my tiny child trying to rehab, which was tough.

“I wasn’t really sure if I was going to get back to playing rugby. Luckily Bayonne called me and asked if I’d like to come down here. I jumped at the chance. The area is amazing and the team is doing some incredible things.”

Pyle’s two-year deal will expire just a few months before his 34th birthday. It seems highly unlikely now that he will return to his homeland and compete again for a gold jersey. That does not mean the desire to play for Australia is not there. The requirement for him to play Super Rugby to be eligible is simply a bridge too far.

“There are other reasons too, including financial. You look at Super Rugby as a player and you worry about its future. You don’t know what’s going to happen with it next year. It’s hard to put your trust in a competition like that.”

Pyle came close to a return several years ago. A second tilt at an international career might have happened if not for an unexpected twist of fate.

“During my second season in Paris, (Michael) Cheika came over and did the rounds,” he says.

“He said that he was keen to get me back and could put me in a squad and give me a chance to prove myself. Then I had a concussion during a match and the brain scan revealed that an artery was not formed properly in my brain. It actually had nothing to do with the concussion.

“The best doctor to fix that was in France, so I decided to delay my decision until after the procedure was done. I went through the French medical system, which was amazing, and by the time it was all done the drive to go back to Australia was over. I was pretty happy to stay in France.”

Which is where Pyle will likely see it out the rest of his playing career. The plan upon retirement is to return home and further a business venture he’s currently engaged in via distance. It is a digital platform called playsport.com which facilitates Aussies becoming more active by connecting them to sports clubs around the country.

Back in the present, Pyle’s own activity levels will soon be shifting into overdrive down in south-west France. A further 25 domestic games this season for his side, plus more European encounters, should keep him honest.

The rugged Aussie will be a fine addition for Bayonne, and kudos to them for snapping him up. But it’s another second-rower lost to Australian rugby. A position in which the home stocks keep falling and falling. C’est la vie.