Has the K-Train come to the end of the line?

The weekend clash at Suncorp Stadium was more than just a match to decide the current top dog in Super Rugby Australia. It was much, much more than that: a game full of Wallaby individual trials at the most granular level.

Wherever you looked, there were compelling mano a mano battles, whether it was Allan Alaalatoa versus Taniela Tupou at tighthead prop (which I’ve examined extensively in two previous articles); Liam Wright and Harry Wilson against Rob Valetini and Pete Samu in the back-row; Nic White and Tate McDermott going head to head at no.9, Tevita Kuridrani against the young contender Jordan Petaia at outside centre; the two Toms (Banks and Wright) versus Jock Campbell and Filipo Daugunu in the back three.

One of the interesting aspects of those contests is that in the majority of cases, the Reds were fielding much the younger man. The average age of those Brumbies is 26, whereas that of the Reds is 22 years old.

In not one of the individual jousts did a Brumby even outpoint his opponent in the red corner, let alone knock him out conclusively. But perhaps the most definitive contest was fought out at the number 13 position.

Tevita Kuridrani has been one of the best outside centres in the world, particularly on the defensive side of the ball, for many a year. Yet there were distinct signs of wear and tear in his battle with one of the hottest backline talents in the Australian game, Jordan Petaia.

If a torch is being passed across the generations anywhere, it may be passed here.

Beginning with the Round 8 game against the Waratahs on August 22, Brumbies head coach Dan McKellar made the jolting decision to replace Kuridrani with league convert Solomone Kata, and Kata continued in the same spot for the win over the Western Force the following week.

At the time, McKellar denied that the change was form-related, stating that Kuridrani had played “a lot of rugby”. A very brief flip of the research chart revealed that “a lot of rugby” meant five games in five months.

Two other changes, which were made at the same time, involved the relegation of halfback Joe Powell (not currently on Dave Rennie’s Players of National Interest list) and the promotion of reserve hooker Connal McInnerney, who is on it.

So maybe there was more to it than just innocent squad rotation. After all, when Kata first joined the Brumbies, McKellar had commented, “He is a point of difference player with a physical profile to add to our squad. He is a very powerful and dynamic footballer who has the ability to stress any defensive line. At this stage, we see him as a utility back and we will be open-minded about the position he plays.”

It is quite conceivable that the Brumbies coaches wanted to take a look at Kata as the long-term replacement for Kuridrani at number 13, based upon a permanent decline in Tevita’s powers.

That view would certainly have been confirmed by events at the Suncorp, where the Brumbies man looked to be a step off the pace in both thought and deed, on both sides of the ball.

On the attacking side, the Brumbies attack structure did Kuridrani no favours at all. Right from the beginning of the game, it featured outside-half Bayley Kuenzle throwing long passes from first receiver into a deep-set second line of attack.

There are at least 15 metres between the hindmost foot of the previous ruck and the positioning of second receiver Irae Simone, and it is four Reds defenders, led by Liam Wright, who offer to fill the critical space by the time the ball reaches Kuridrani. 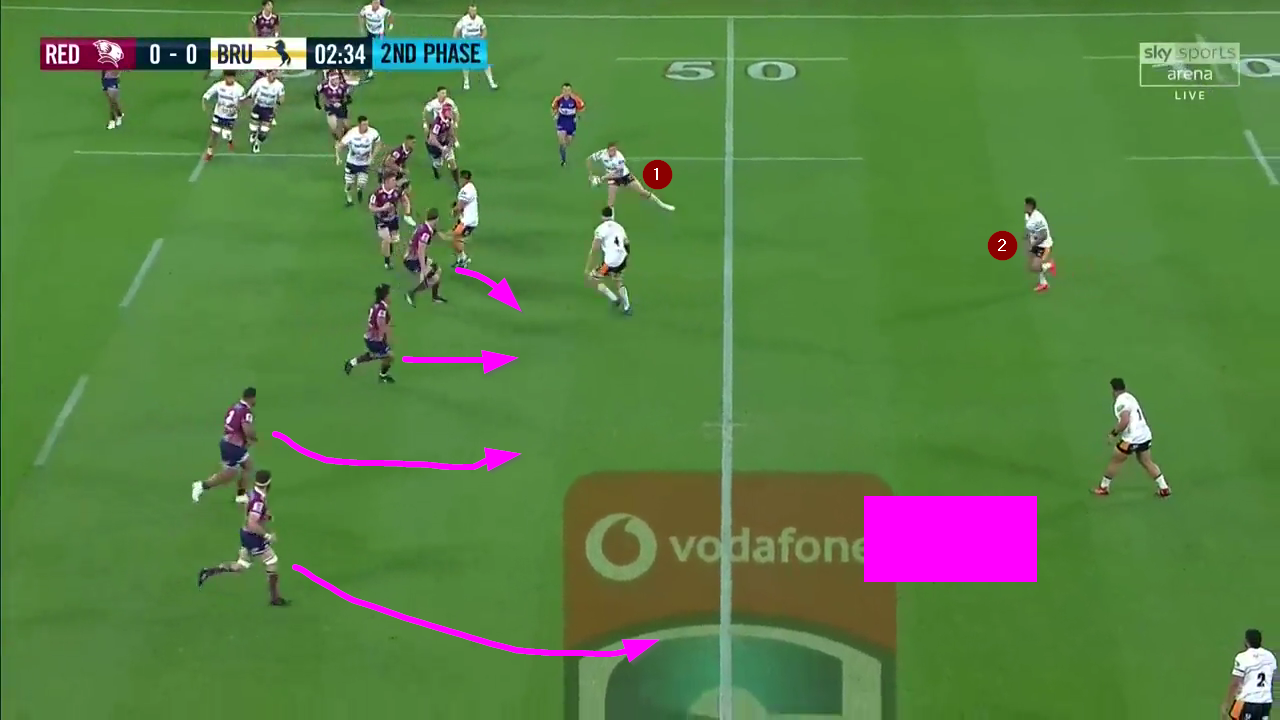 These were situations which Jordan Petaia was able to manage with impressive maturity on defence.

Defence of the 13 channel is crucial because this the area where the attacking side most often picks to introduce its extra man (typically the blindside wing), and present the defender with a difficult choice to make.

In the above example, Petaia is perfectly-balanced to make that decision. He is square to the player running the ‘unders’ line (Kuridrani) to make the frontal tackle, and equally well able to push off and challenge the outside man (Simone). He doesn’t push off before Tevita has shown his hand as a decoy. 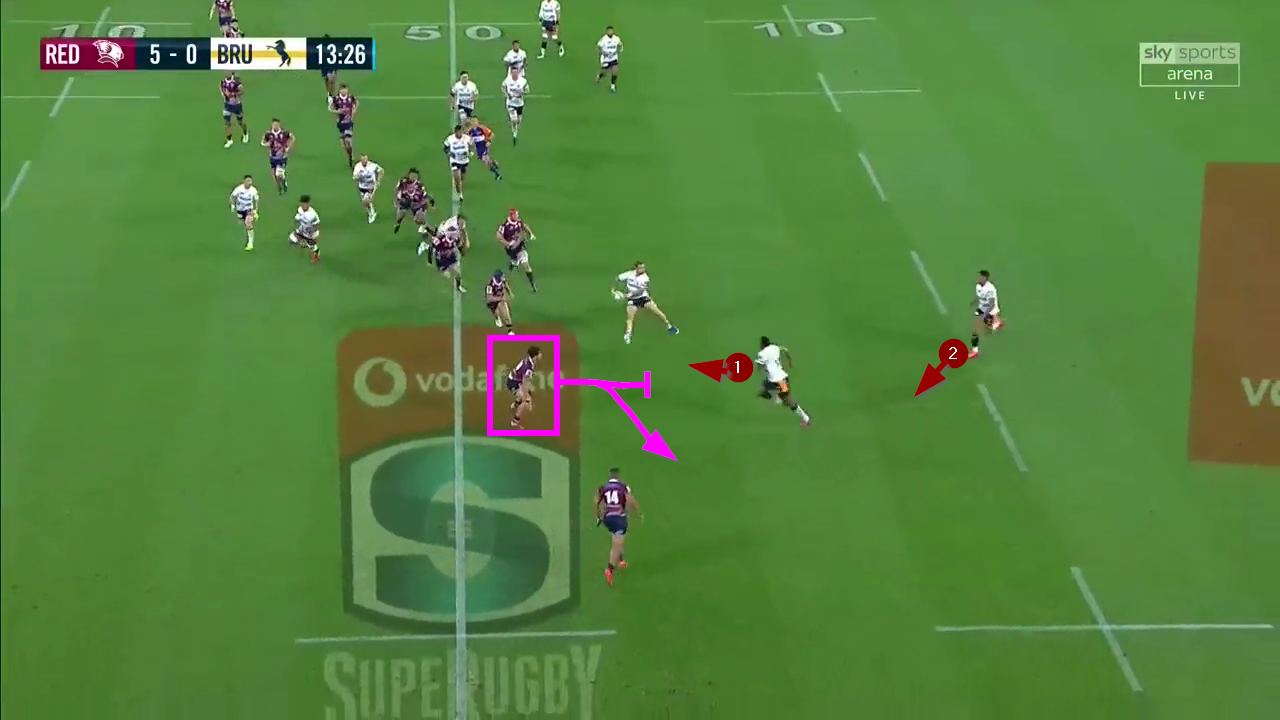 It is like a poker game for the defensive 13. He cannot afford to blink and tip-off his cards before the offence has revealed theirs. 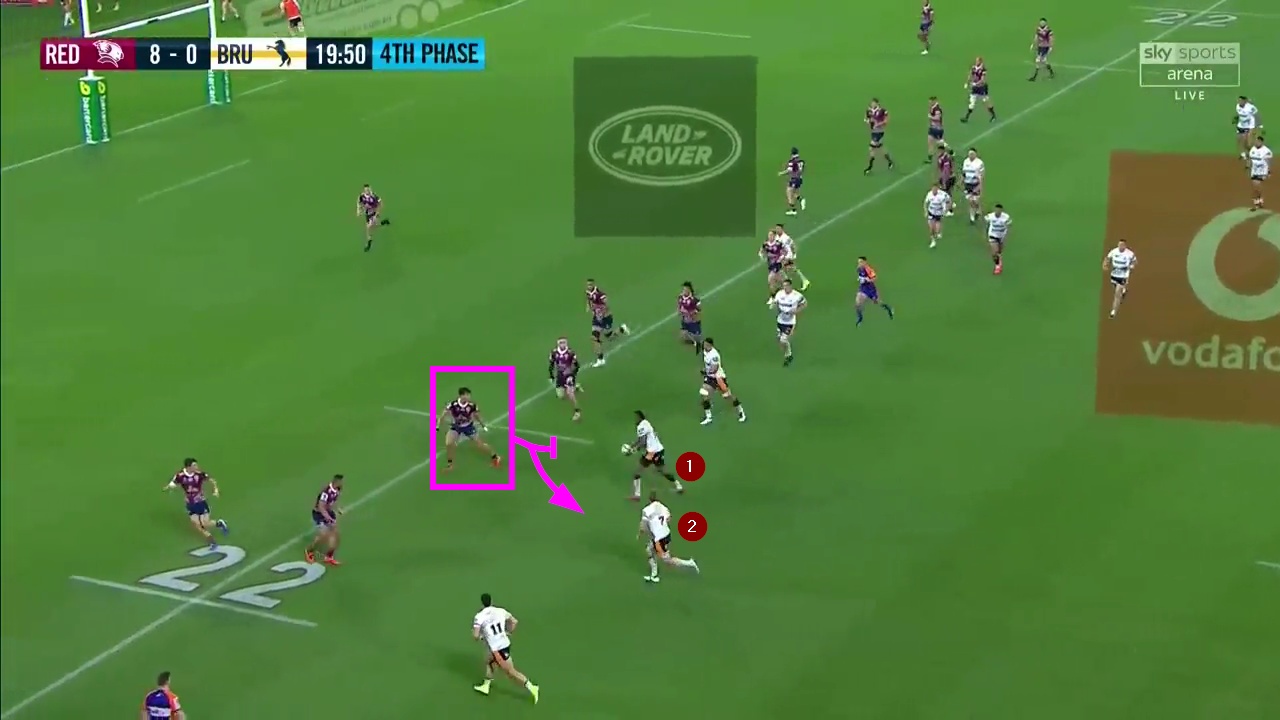 Petaia is well-positioned to square up on Kuridrani while observing the extra threat (number 7 Will Miller) outside him.

The attacking problems for the Brumbies multiplied, especially when Bayley Kuenzle was required to make those long passes to a deep-set second receiver off his left hand.

Kuenzle has to urn his body completely towards the side-line in order to reach Kuridrani with the delivery. He is not a running threat, and neither are the two forwards ahead of the Brumbies centre. 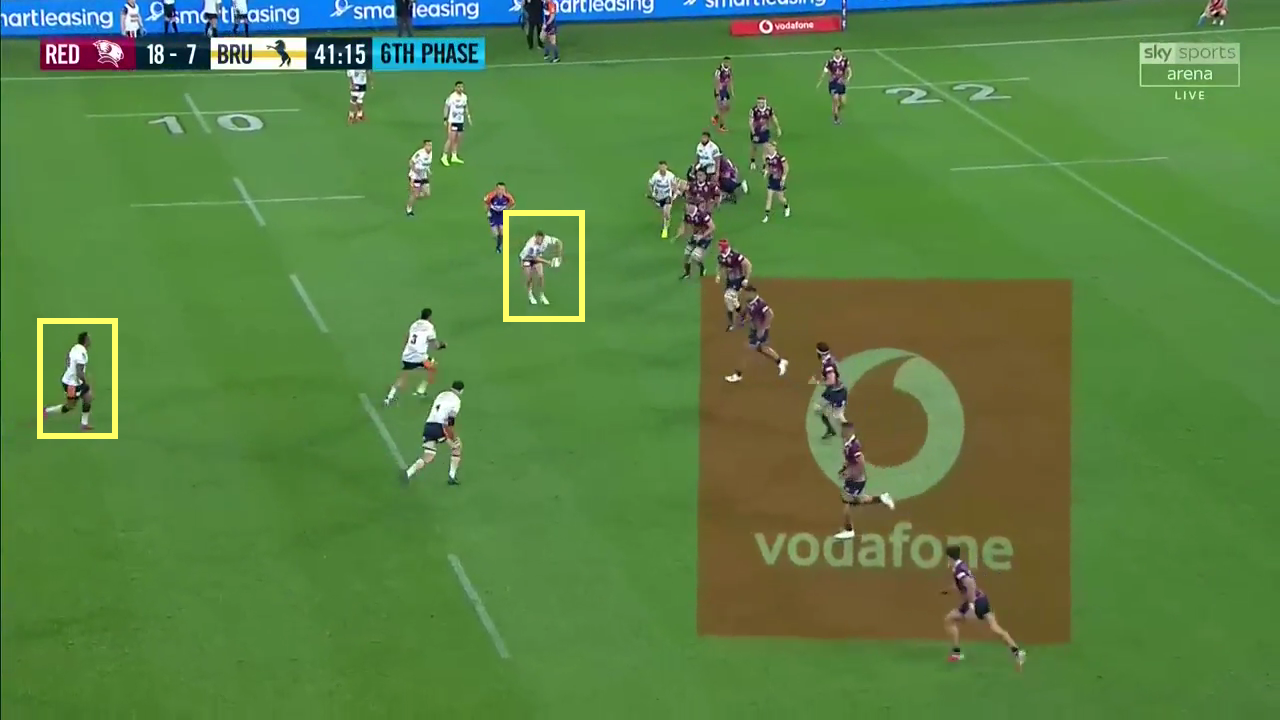 That gives Petaia ample time to read the signals and cut off the wide attack, forcing the play back into the gaping jaws of Liam Wright at the tackle.

As the game progressed, Kuenzle’s long passing technique from only got worse, especially from left-to-right.

Tevita Kuridrani gave up a total of five fumbles on attack, one of them when he was already across the Reds’ goal-line and in the process of touching the ball down for a try. In most of those instances, he was the victim of the Brumbies’ attacking structure. For a follower of Australian rugby, his ineffectiveness on defence was of much greater concern.

Tevita was twice beaten by Reds’ fullback Jock Campbell in the build-up to the Maroons’ first score of the game:

Compared to the shot of Petaia defending at 19:50 (above), Kuridrani has set himself up for the right foot step by Campbell. 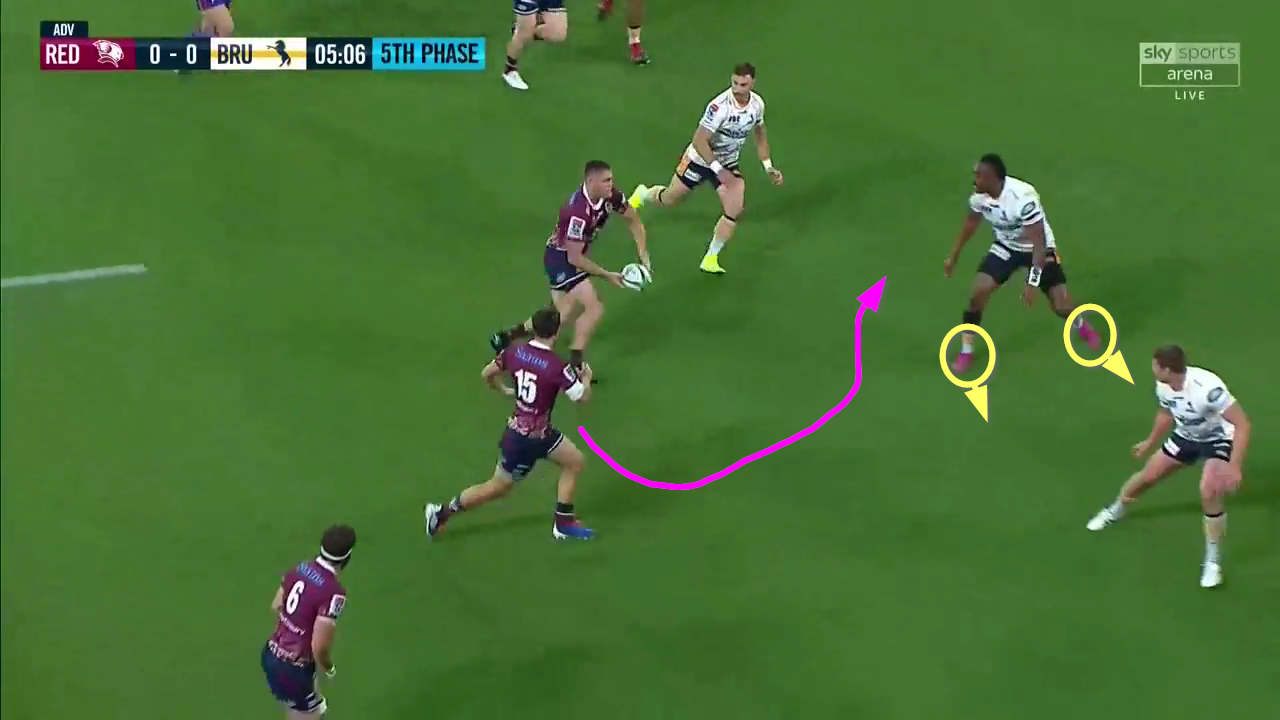 The Brumbies centre is square to the side-line, but the greater part of the issue has been created by the attitude of the Reds’ first receiver James O’Connor. Instead of standing back in the pocket and throwing long, deep passes, O’Connor is attacking the line and drawing the attention of the defenders in front of him.

Campbell found himself in direct opposition to Kuridrani again on the scoring phase.

This play is a real worry to a Wallaby supporter, because Kuridrani is in good shape to make the tackle, but simply cannot handle Campbell’s speed to the outside. 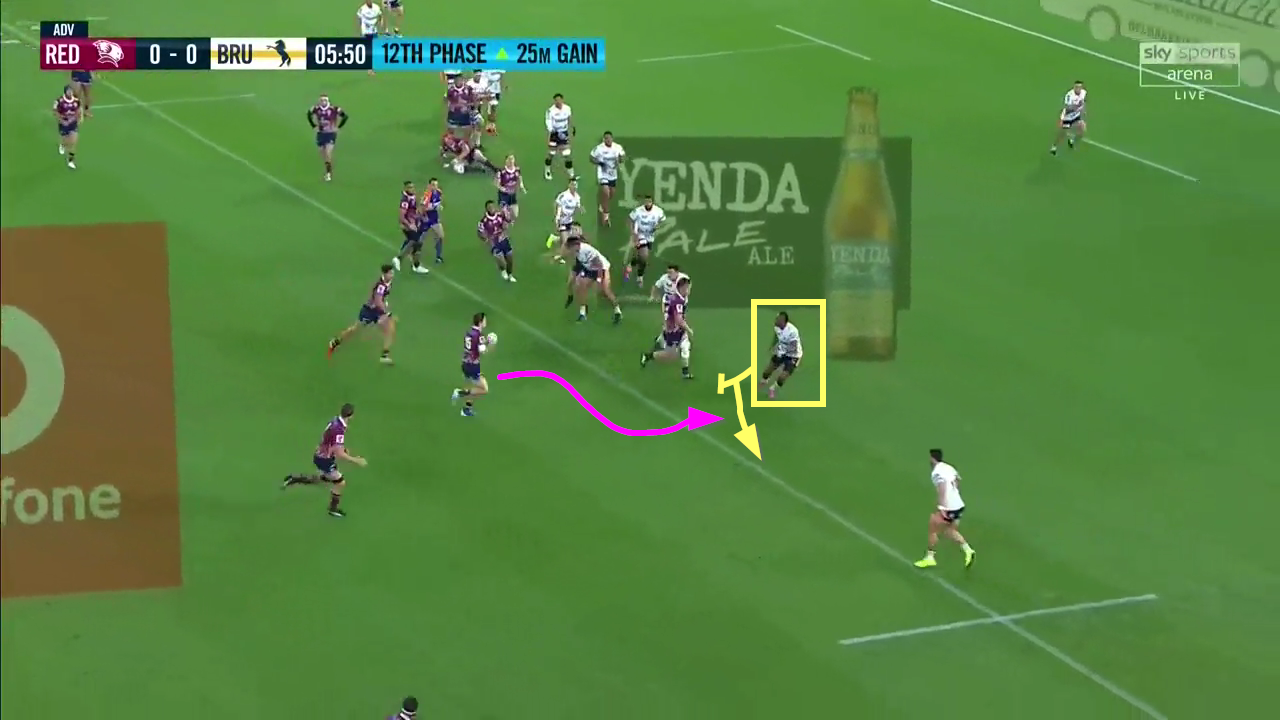 It was not only speed which gave Kuridrani problems, it was Jordan Petaia’s power and dynamism in contact. On two occasions in the first period, Petaia simply busted right through the frontal tackle attempts of the Brumbies’ veteran.

Although Tevita Kuridrani was not directly at fault for the Reds second try of the game from scrum, the question whether his lack of confidence in his own game reduced coordination with the wing outside him, Tom Wright, remains very much alive.

Kuridrani had Hamish Stewart covered, so there was no reason for Wright to jam in on the Reds number 12 unless he was sure he could take man and ball together. 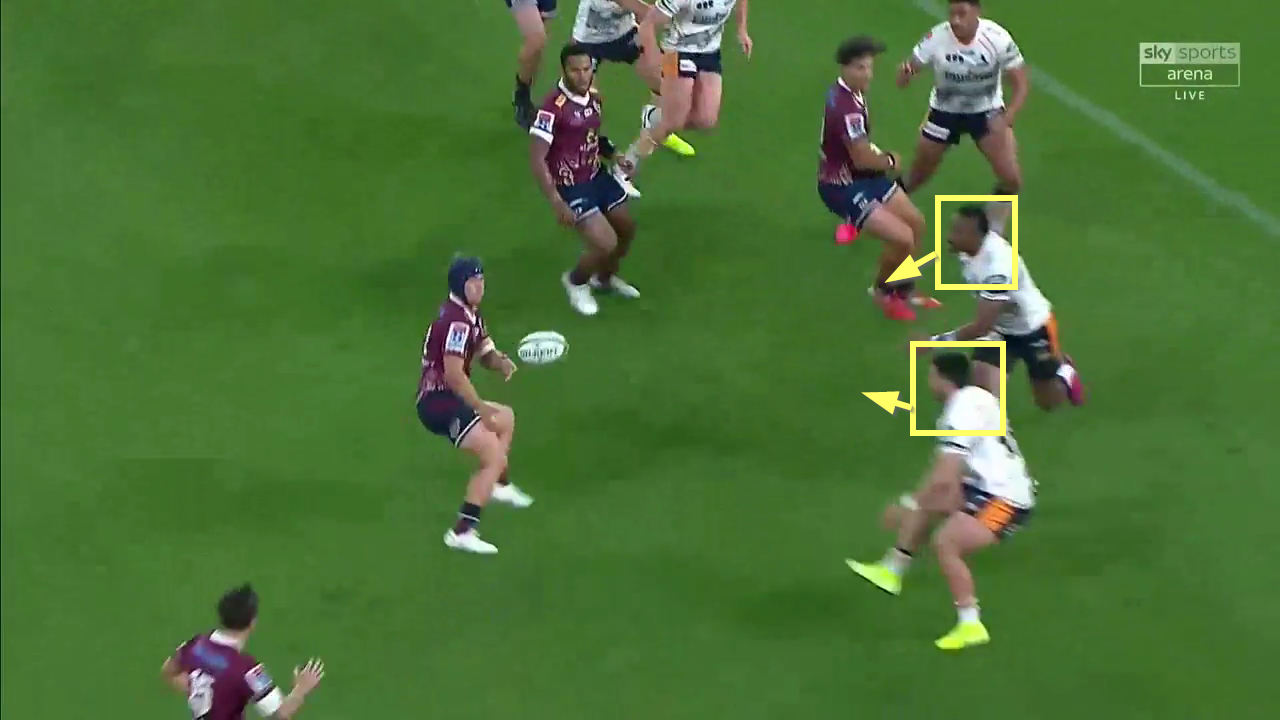 Was Tevita Kuridrani fully match-fit, and fully-honed mentally for the game against the Reds? He looked heavy in the body and his reactions were less than razor-sharp, and the Dan McKellar-authored break in rounds 8 and 9 looked to have done him no favours at all.

But it is only right to cut a man with his illustrious playing history some slack before writing him off completely. If the same two teams meet again in the final of Super Rugby Australia at GIO Stadium on September 19, we may yet see the old Tevita – powerful and direct on attack, smart and destructive on D.

For the time being, however, it looks like most of the Reds will have quietly moved past their rivals from Canberra on Dave Rennie’s Players of National Interest list. Nic White will probably still be a nose ahead of Tate McDermott at 9, but all of Taniela Tupou at 3, Liam Wright at 6, Filipo Daugunu at 11 may now be first choices, while others like Jock Campbell must surely now be on it.

We may also have witnessed the passing of the torch at number 13 between generations, between Kuridrani and Petaia. Petaia has explosiveness and skills on attack, and unexpected maturity and intelligence on D for such a young man.

If that is really the case, it would be a worthy transition indeed.