Having already recorded the most victories at the US Open, Serena Williams raised the bat on Tuesday, recording her 100th match victory on Arthur Ashe Stadium with a fighting three-set victory over Greece’s Maria Sakkari.

Facing a formidable opponent to whom Williams had lost in the third round at the Western and Southern Open last month, the American took the first set 6-3 after securing a break of serve.

The second set went to a tiebreak, during which the American fell behind 0-4 before fighting back to six-all, bringing her to within two points of a straight-sets victory.

However, a slew of errors from Williams allowed Sakkari to take the second set, level proceedings at a set apiece and have the Greek player daring to dream of the prospect of beating the legendary American for the second time in as many attempts.

Sakkari broke to start the final set but Williams broke right back to take a 3-2 lead. Another break of serve in the eighth game saw her take a 5-3 lead, and she then duly served out the match to advance to the quarter-finals of the US Open for the 17th time.

It is also the 53rd time the American, soon to turn 39, has reached the last eight at any major. 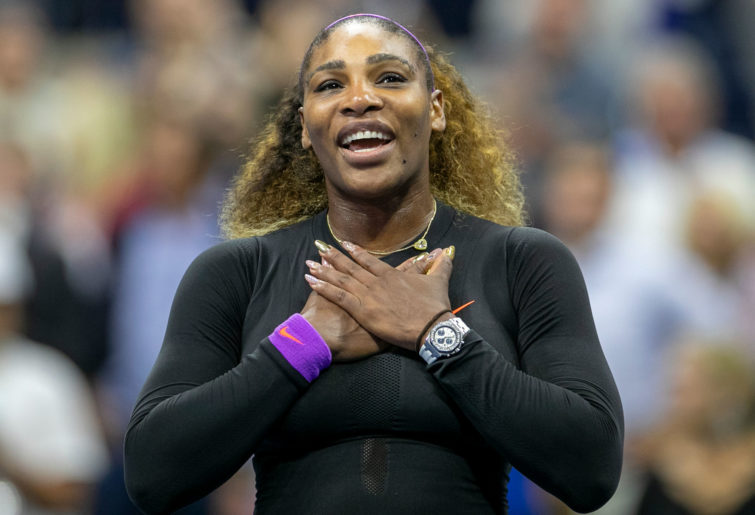 Her quest for a record-equalling 24th major singles title will continue in the quarter-final stage, where she will be lined up against comeback queen Tsvetana Pironkova, who edged out Frenchwoman Alize Cornet in a three-set thriller.

Playing her first professional tournament since becoming a mother in April 2018, Pironkova broke Cornet’s serve in the ninth game to take the opening set 6-4 and then had the chance to go up a double break when she held two break points for a 3-0 in the second.

However, Cornet fought back, claiming four straight games and then had two break points for a 5-2 lead, before Pironkova broke back to put it back on serve.

She then had the chance to serve out the match at 5-4 in the second, but Cornet would again break back to force a tiebreak, winning it 7-5 to send the match to a one-set shootout.

A double fault from Cornet, her fifth of the match, saw Pironkova break in the eighth game of the final set, after which she converted on her second match point to advance to her fourth career grand slam quarter-final and first since the 2016 French Open – and her first on hard courts.

Her previous best result at Flushing Meadows was reaching the fourth round in 2012, where she lost to former French Open champion Ana Ivanovic in straight sets. Had she won that match, she would’ve proceeded to face Serena Williams in the quarter-finals, as she will this year.

The battle of the mothers, as it has been dubbed, will be the fifth career meeting but first since 2015 and first at a major since the 2007 French Open. Williams has won all four meetings, including the last two in straight sets.

In the day’s other women’s matches Victoria Azarenka dispatched Karolina Muchova and Elise Mertens beat Sofia Kenin, the winners playing each other in the quarter-finals.

The Spanish-based Australian saved four set points in the first-set tiebreak to claim it 8-6, after which he was barely troubled as he kept alive his chance of becoming the first Australian to win at Flushing Meadows since mentor Lleyton Hewitt won here in 2001.

De Minaur’s victory means that, for the first time since Wimbledon in 2016, when Andy Murray won at age 29, we will have a grand slam men’s champion that is under the age of 30.

A first-time grand slam men’s champion born in the 1990s is already a formality following Novak Djokovic’s disqualification from the tournament the previous day.

Next up for De Minaur is a showdown against the new title favourite Dominic Thiem, who thrashed Canadian Felix Auger-Aliassime in straight sets despite being out-aced 12-2.

After taking the first set in a tiebreak the Austrian claimed the final two sets losing just one game in each.

Third seed Daniil Medvedev was just as ruthless in his fourth-round clash, thumping the last remaining American man in the draw, Frances Tiafoe, dropping just five games, none in the third.

It ensured that local representation in the men’s draw ended before the quarter-finals for the second consecutive year.

Medvedev next faces Andrey Rublev in an all-Russian quarter-final showdown after Rublev came from a set down to edge out Italian sixth seed Matteo Berrettini in four sets.

The rescheduled French Open is over for another year – but in truth we’ll only have to wait seven-and-a-half months for the 2021 tournament to take place. Nonetheless, while we saw an all-too-familiar men’s champion, in the upset-ravaged women’s draw we saw a brand new French Open champion – and the second female major champion […]