Can you believe it? There’s just two weeks to go.

Scores of seven for myself and Liam Salter mean I maintain my three-point lead atop the panel, with Marnie’s eight closing her deficit to six. I wanted to see outlandish upset tips from them both to keep things interesting – maybe next week.

It’s mid-September, so I shouldn’t be surprised, but it’s hard to believe the home-and-away season is just a fortnight away from ending.

We’ve got an interesting one to start things off and, although their last three weeks haven’t been incredible, I’m backing the Saints to make a splash against West Coast tonight.

St Kilda are due for a return to form, while the Eagles are riddled with injuries and have now proven beyond doubt they simply aren’t the same team when they play away from Perth.

The true blockbuster of the week of course is Geelong’s date with Richmond tomorrow. I don’t know what plans you’ve got on Friday night, but if you’re reading this article and you haven’t cancelled them, what’s going on?!

You can never, ever count the Tigers out, but I’ve always maintained the Cats would have won last year’s preliminary final with Tom Hawkins, and I expect them to exact revenge. They’re hotter than hot right now and deserve favouritism against anyone. 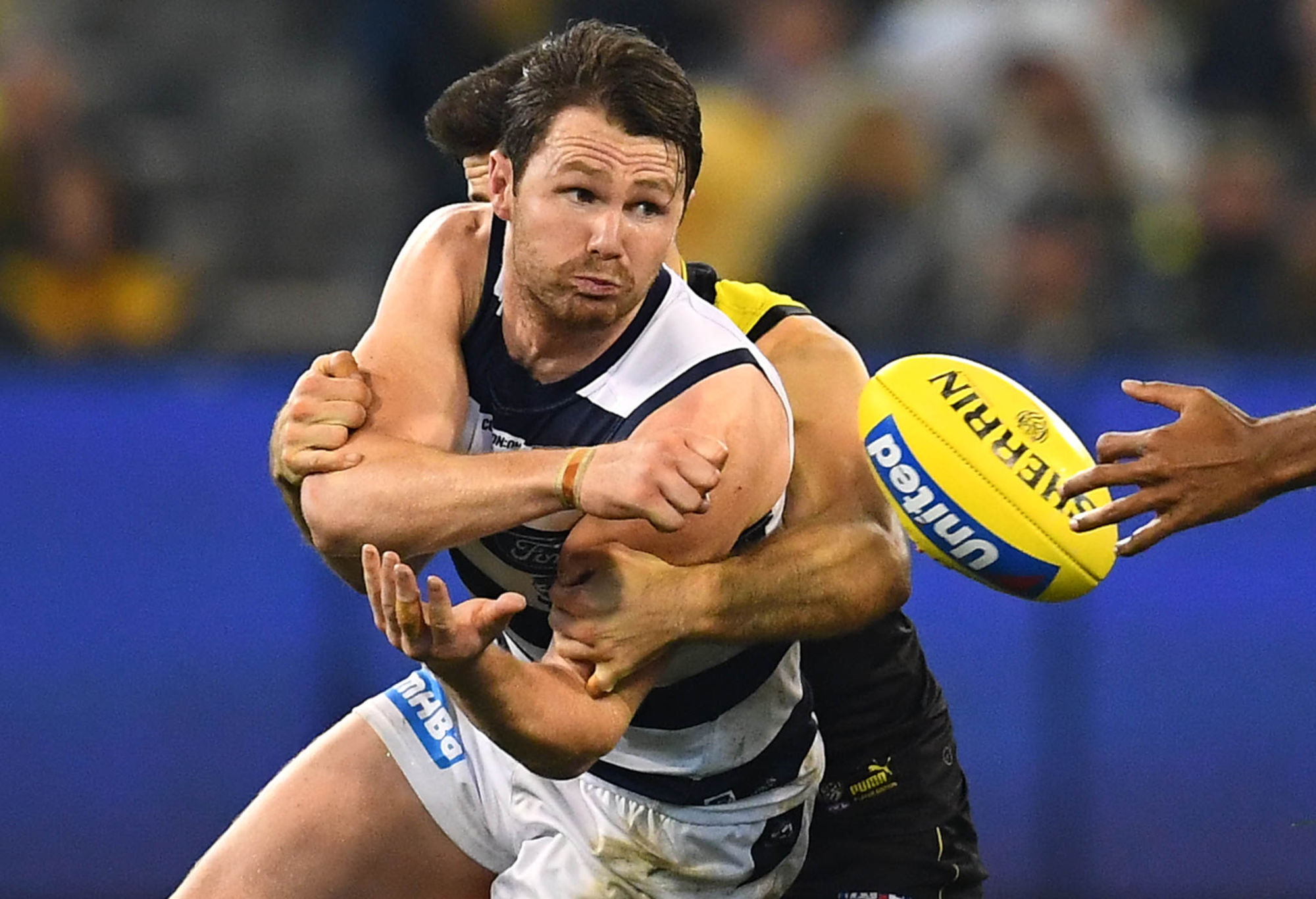 The only other match this weekend that really warrants a bit of thought is Greater Western Sydney vs Melbourne. Neither side has played like they deserve a finals spot lately but, barring a draw, one is set to have their chances boosted massively.

I trust neither side but will tip the Demons for potentially the last time ever.

Things are a bit simpler elsewhere. Fremantle will continue their strong finish to the year with a comfortable win over North Melbourne, Port Adelaide will swat Essendon like flies, Carlton should have the quality to see off Adelaide’s resurgence, the Bulldogs will knock off the Hawks and Alastair Clarkson will claim the umpires’ lime green uniforms is too similar to Hawthorn’s gold, Brisbane will crush the Swans and Collingwood should see off the Suns.

The penultimate Shoe-In of the Week goes to Port Adelaide once more – they should have little trouble putting another loss in Essendon’s column.

The final two rounds of the home-and-away season are here! They’re spread across a somewhat ‘normal’ time frame too, so we can digest properly and look ahead to what should be a very interesting finals series.

Let’s just get to the game of the round, shall we? Geelong vs Richmond on Friday night. I cannot wait. I still can’t wrap my head around the ‘caution’ surrounding the Cats. Why don’t people think they’re a genuine threat this season? Surely after their demolition job of Essendon last weekend and their good form recently people are starting to take notice.

I assume the scepticism comes from their inability to progress to a grand final in recent seasons and I assume the reason most people believe Richmond are the team to beat in 2020 is because of their sensational finals form.

Both sides are fantastic, and this could very well be a preview of the 2020 decider. I can’t go past Geelong at the moment. White-hot.

Joining Geelong in the battle for a top-two finish are Port Adelaide and Brisbane, who should both notch up wins this weekend. Port will finish on top – their form has been just unbelievable, and what’s scary is that they’re mainly being driven by kids. This could be a sign of things to come in the next five to ten seasons.

The Lions are also looking pretty good, but they proved last season that playing finals at the Gabba isn’t necessarily an advantage. Sure, they’ve matured over the past 13 months, but they have work to do in front of goals.

I also need to stop myself from trusting West Coast and the Giants. Neither side has been overly impressive of late – particularly in the Giants’ shock loss to Adelaide a few days ago – but I keep tipping them because I feel like, deep down, they understand the importance of winning at the moment. It sounds silly, because winning is always important, but in the context of both of their seasons it’s crucial they win these last few games.

For West Coast, a top-four finish is on the line and the Giants will need a win if they want to secure a spot in the finals. I think they both will. If not, it says a lot about both sides and maybe they’re not quite as good as I thought.

Coming for the Giants’ finals spot are the Western Bulldogs. A good modern-day rivalry, this one is. The Bulldogs’ shock victory over West Coast earlier this week has pushed them back into the finals frame, and it appears as though one of these two sides will make up the eight. They are just too inconsistent for my liking, but I don’t mind their chances against Hawthorn.

I like the way Freo are travelling at the moment. They’re better than their 13th place suggests and should beat North. The Pies and Blues should be able to get the job done as well.

The penultimate round of footy this year, and there’s still a tonne of uncertainty in the ladder. It’s going to make for an exciting suite of games, then.

Firstly, I’ll cut to the chase on a trio of easier games: Brisbane should comfortably beat the Swans, Port will pummel Essendon, and Collingwood – if they’re any chance of making finals – simply have to defeat Gold Coast.

As is tradition, expect to see the footy gods throw in an upset or two to make me rue my words, though.

There’s also plenty of action surrounding the lower part of the eight. The Giants, Demons and Bulldogs are fighting for a position. The former duo seemingly strived to ruin their own chances in the past week and, ironically, face each other on Saturday night. The Demons are spiralling a bit more, so expect the lacklustre Giants to win.

The Doggies have an easier match-up: they’ll beat the Hawks, though an upset wouldn’t necessarily surprise. 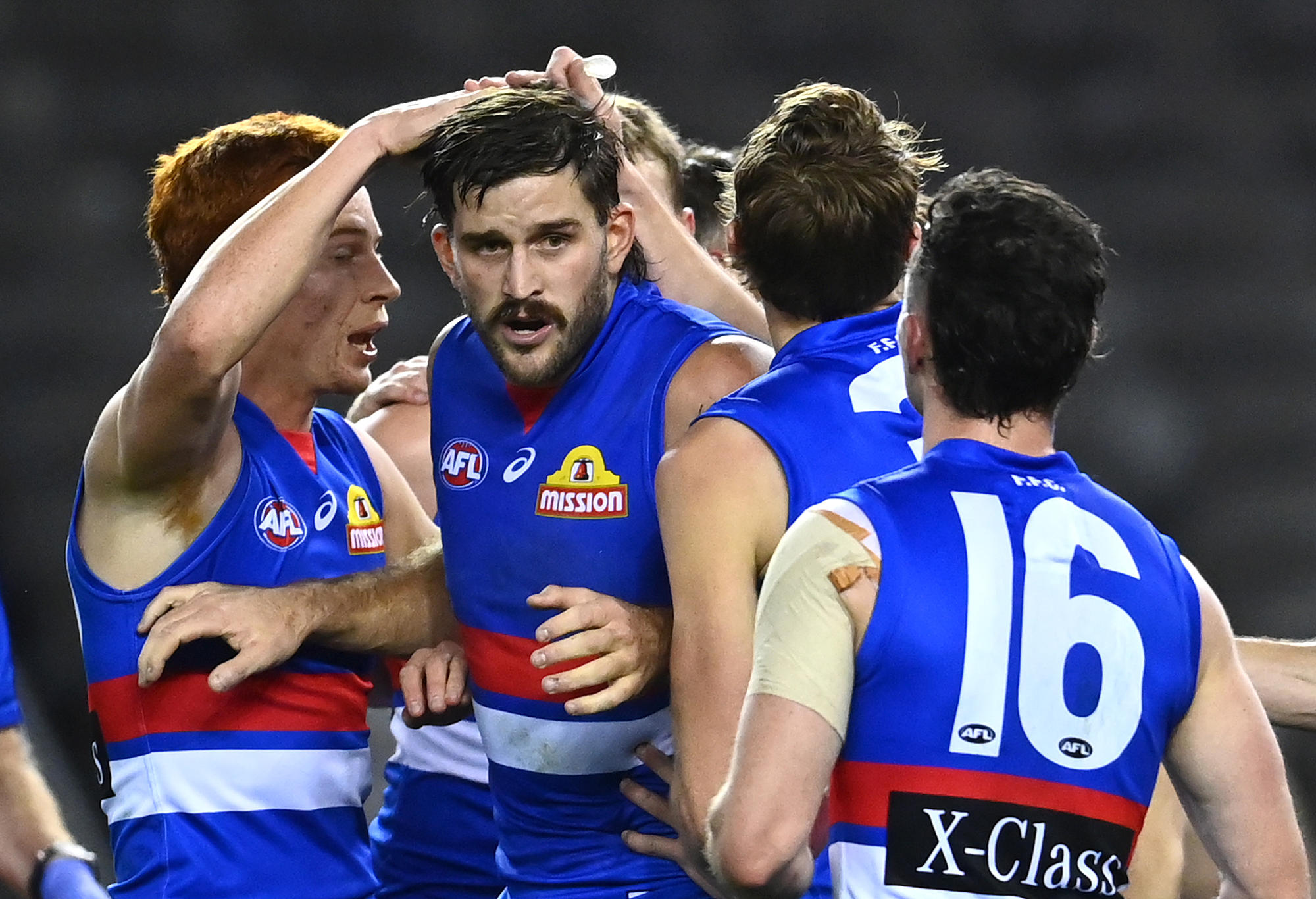 The Bulldogs are back in the finals box seat. (Photo by Quinn Rooney/Getty Images)

In a pair of matches that hold ramifications for the lower part of the ladder, Saturday’s clash – North hosting Fremantle at Metricon – leaves the Kangas vulnerable to the wooden spoon if Adelaide’s resurgence continues. If North lose – and I think they will – then the Crows’ Sunday arvo clash with Carlton becomes important.

The Blues will be buoyed by their last-gasp win over the Swans and are still a mathematical chance of making finals but have to navigate a clash with the suddenly-good-again Adelaide side.

The Crows are back in Queensland, away from their Adelaide Oval confines, and despite the enthusiasm around them, I’ll back the Blues to pull out the win and lock in the South Aussies as wooden-spooners-to-be.

As for tonight’s Eagles-Saints clash, both teams are overwhelmingly likely to make finals, but their exact positioning remains up in the air. Neither have been in great form, but the Eagles’ injury concerns are a worry.

I’ll (hesitantly) back the Saints here. Similarly, the brilliant Geelong host the reigning premiers in what is far and away the match-up of the week. A potential grand final preview, the Cats are the favourites headed into this clash – and given they’re in better form, that isn’t a surprise.

The Cats to win and possibly solidify increasing premiership potential.