What Carlton needs to win a premiership

Carlton fans can’t be too disappointed by the season so far.

The side have five more wins than they would have expected at this point, and after six years of misery and heartache it’s safe to say that Brendon Bolton has laid the foundation for the young Carlton players.

That said, he wasn’t able to make the tough calls required to win games, and now David Teague has taken the talent of the Blues young list and is running with the momentum.

We have seen some terrific football from Carlton, defeating Geelong and the Western Bulldogs. However, we have also seen by far the worst brand of football by a team in 2020. Carlton’s games against Hawthorn and Collingwood were hands down the worst matches of football for the Blues. Lazy forwards, wasteful midfielders and defenders who can’t play all three roles.

Carlton’s matches against St Kilda and Greater Western Sydney were the definition of lazy football, and they were beaten by the better sides. The Blues should have won against Port Adelaide, West Coast and Melbourne but were undone by umpire decisions at key moments.

The players who have stood up

Sam Walsh
He’s a gun and a fantastic pick of the pack in the 2019 draft. Walsh is by far among Carlton’s top three players. The Blues need to lock him away with a long-term contract.

Lachie Plowman
He’s one of the greatest defenders in the AFL. He kept Tom Papely quiet, which is what other clubs can’t do!.

Jacob Weitering
The former No. 1 draft pick from the 2015 draft has finally shown what he’s made of. An All Australian defender who will be the best defender in the AFL in no time!

Zac Fisher
Why he was forgotten for the first half of the season is beyond me, but he is by far shining light for Carlton fans. He is a very smart player when it comes to kicking and hitting targets.

Ed Curnow
Has been influential for Carlton this year. Curnow’s does not shy in changing the way he would usually play to adapt to the game situation. 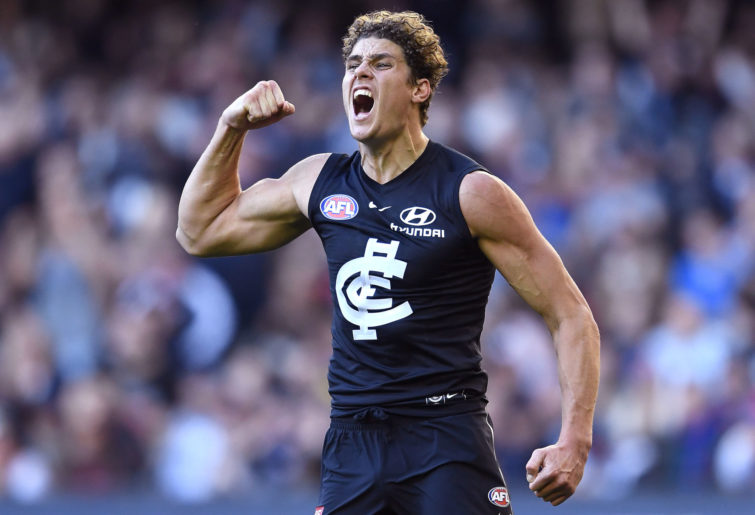 However, for Carlton to win a premiership they need the following players to leave, stand up and these players from other clubs.

Players who need to stand up

Patrick Cripps
He’s been pretty average by his standards. He needs to stop smiling and giggling after a loss. I bet Carlton fans feel the same.

Levi Casboult
His kicking needs to improve, as does his marking.

Sam Petrevski-Seton
He needs to be tougher in the contests and needs to be smarter when using the ball.

Harry McKay
His kicking and marking need to improve.

The players who need to get the boot

Mitch McGovern
Has he even done any damage on the scoreboard or had an impact on a game this season? I don’t think so. Unless he stands up with two games left, Carlton need to get rid of him.

Michael Gibbons
Unfortunately he doesn’t fit into Carlton’s game plan. He would be fantastic trade bait.

Eddie Betts
As sad as it is to say, Eddie Betts probably doesn’t have much more to give. I hope Carlton keep him as a mentor or even a coach. He is a fantastic person, let alone footballer.

The players Carlton need to pursue

Tom Papley
It’s no surprise Papley is on this list. He expressed interest in joining Carlton last trade period. He would be perfect for Carlton and would make them so dangerous going into next season. Carlton would need to give up two first-round picks for him.

Ollie Wines
He is contracted until 2022 but would be a perfect fit into Carlton midfield and would be able to support Cripps, Curnow and Will Setterfield. Carlton would need to give a second-round pick and possibly a future second-round pick.

Alex Witherden
If Carlton can’t get Wines, they need to go with this star in the making. Averaging 19.3 disposals a game and with elite ratings in marks and kicks, Carlton need to monitor carefully. Two second-round picks would probably suffice, or Carlton could look at trading Cameron Polson.

Zac Williams
He is a must for Carlton. The Blues back six is probably the best in the AFL. With Kade Simpson all but likely to retire at season’s end, Williams would be a perfect fit in Carlton’s defence. As a free agent Carlton just need to convince him to make the move south.

With Charlie Curnow and Caleb Marchbank due to return fully fit next season, Carlton will become a premiership favourite in 2021, especially after seeing the potential they really have.

Tom De Koning and Marc Pittonet during the off-season need to really focus on their ruck work. They could be a really dangerous duo in Carlton’s line-up next season.