Why the maturing Blues are ready for success in 2021

At the point in the season the phrase ‘mathematical chance’ suddenly pops up in the footy lexicon to describe a team’s finals chances, and it’s been applied to Carlton more than once in the last week.

Halfway through the second quarter the better term might as well have been zero. Down by 39 points, the Blues looked all out of sorts. Even when Sydney clunked two excellent contested grabs forward to open their account the Cartlon’s own forward entries reminded us exactly why having elite talls don’t always mean more goals when the inside 50 entries are poor.

In fact the Blues dominated that stat on Tuesday night – and they rank fifth in the league overall – even during the Swans early scoreboard dominance. Carlton can win the ball, yes, but hurried and often blind kicks out of the back of stoppages often end up in the hands of the opposition. 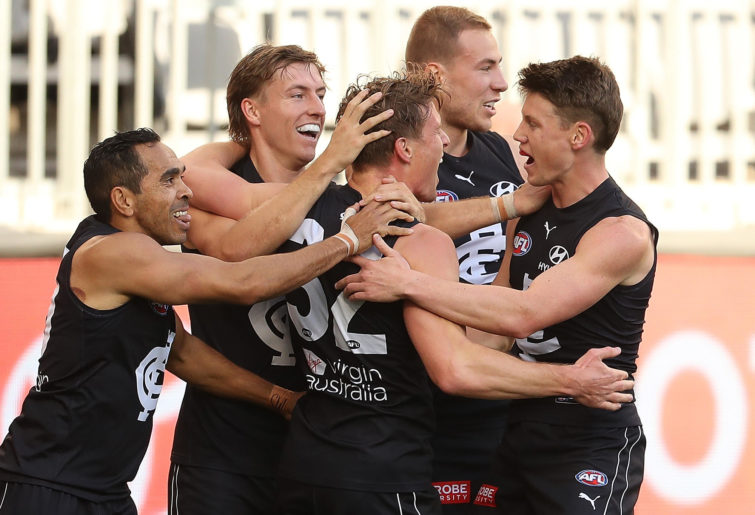 What’s worse is that despite having three above-average-to-elite defenders – Sam Docherty, Jacob Weitering and Liam Jones – the Blues too often get caught on the hop through the middle, and failed inside 50s result in easy opposition ball movement through the centre of the ground and consequent shots on goal.

The ball lands inside 50, isn’t marked cleanly by Harry McKay or Levi Casboult and the Blues at ground level don’t go enough to keep the ball locked in. Carlton rank 16th for rebound 50s against.

The other problem is that when the Blues look slow they look really slow. Carlton have given up five-goal run-ons in seven matches this year, the sign of a pedestrian side under the pump. The heads duck and turn around looking for someone else to carry the load.

Ed Curnow is an excellent good player, Patrick Cripps appears hurt and never had a major turn of pace to begin with (but is still dominant at the coalface) and Will Setterfield and Sam Petrevski-Seton (who was excellent against the Swans) go missing for large gaps if not entire games. Paddy Dow hasn’t come on and looks all at sea. Marc Murphy does his best but is clearly undersized for the 2020 game and has lost a yard of pace he won’t get back.

Certainly the Blues require a true burst player – Zac Williams from GWS has been mentioned as an ideal fit – who can win his own ball and shock opposition defences that until now have experienced fairly predictable Carlton forward 50 entries, voluminous they may be. Harry McKay and Charlie Curnow surely will anchor that forward line for years to come with Mitch McGovern (if he can resolve his issues with basic effort) as the ideal insurance, possibly even a swingman.

The other is a clever small forward. Jack Martin at half-forward has given the Blues a shot in the arm – you get excited as soon as he has the ball because he can fire from 50. Injuries have prevented him from really motoring this year.

Eddie Betts has been nostalgic, and footy karma gave him (and us) that four-goal effort against the Western Bulldogs, but his time is done. His mind reacts quicker than his body, and that is the death knell for any player’s career, much less a small forward. Otherwise relying on occasional pieces of magic from other half forwards like Michael Gibbons and Zac Fisher isn’t going to cut it.

Put simply, the Blues need to make a huge play for either Zac Williams or Tom Papley in the off-season to inject electricity into a side that is too blue-collar for its own good.

But the Blues are close. They play good footy that challenges all – in fact the Blues have the smallest highest losing margin of any team. It’s just individual components of the machine that need tweaking. Sam Walsh, Patrick Cripps, Sam Docherty and Jacob Weitering are all elite or of elite potential. Four A graders in a football side usually means finals. Add another in Zac Williams and in 2021 you’d be hard-pressed to find a side more on the cusp of meaningful finals action than Carlton.

Sam Walsh
Talk about defying the second-year blues, this second-year Blue has gone to an even higher level in the truncated 2020 season. Every time he approaches the ball he either wins it or negates the situation to Carlton’s advantage and gives the team creativity and intensity on the wing. Better yet, he holds the fort when Carlton are down. Future captain.

Rucks
Matthew Kreuzer going down might have been one of those blessings in disguise. Handy at ground level, Kreuzer’s air presence has never quite matched that, and the emergence of Marc Pittonet and Tom De Koning has given Carlton an insight into how their ruck division will look long term. De Koning in particular is a bull, and his follow-ups are sensational. Once he learns his ruckcraft the Blues will have a genuine star on their hands.

No Cripps? no matter
Best of all, Cripps has had somewhere between an average (for Cripps) and a good year, well down on his superlative 2018 and 2019 years. Still a stoppage beast, Cripps has had less of an impact in open play, leading to suggestions he is carrying something affecting his fitness. The Blues have won multiple games this year, with Cripps being negated or held, boding well for a 2021 with a fit Cripps (if he’s injured).

Down back
Liam Jones has been a master spoiler for a long time now and has saved Carlton’s blushes on many an occasionmost recently with his falcon at the death against Essendon. But it’s the emergence of Jacob Weitering that should have Blues fan salivating. The epithet given to the great Bruce Doull was that he was “rarely beaten”, and the same is being applied to Weitering. He is so instinctively clever with how positions himself in the defensive 50 and rarely clunks a kick in the back half. All Australian honours surely beckon.