Stuck in the middle: Aussies uncertain ahead of ODI series

With a stable top order and a settled bowling unit, the biggest question hanging over Australia ahead of tonight’s ODI series opener against England is whether a rocky middle order can fire.

While disappointed with the T20 series loss, a pain somewhat eased by a consolation win on Wednesday morning, coach Justin Langer could take plenty from the first half of Australia’s white-ball tour.

Despite a wayward opening five overs of the series opener, the Aussie seamers and spinners from there executed well after a six-month layoff.

Equally impressively, the fielding was of a consistently high standard, and far superior to the hosts.

But yet again, questions emerged surrounding the make-up of Australia’s middle order, which struggled when it mattered.

The most damning (and eventually series-defining) result was in Game 1 where needing just 39 runs off 38 balls with nine wickets in hand, the Aussies stumbled to lose the unlosable.

The senior top three of David Warner, Aaron Finch and Steve Smith should have seen the result home, with the captain generously shifting blame onto himself after the loss.

But the fact is that trio got Australia to 1/124 — a more-than-sturdy platform in pursuit of just 163.

From there, it was the job of the middle order to finish things off, which they spectacularly failed to do.

The sequence of events, though, was unsurprising.

Too often in the last 18 months, the top order have carried Australia’s short-form teams.

When they fail, rarely have the batsmen at five, six and seven bailed them out as the likes of Eoin Morgan and Jos Buttler have regularly done for England.

And now, Australia take their middle-order woes into the series starting tonight.

Some might argue that issues in T20 aren’t relevant to the ODIs, but the two XIs are very similar.

Breaking it down, the Aussies now have a question mark over who they play at positions five, six and seven at Old Trafford.

A top four of Warner, Finch, Smith and Marnus Labuschagne is nailed down, with many fans looking forward to the Queenslander donning the green and gold again.

Since their return to ODI cricket in last year’s World Cup, Warner has averaged 61.6 and Smith 45.7.

During this time Finch has averaged 51.9 and Labuschagne averages a healthy 50.8 from his first seven games.

So the top order, by any measure, are holding up their end.

Similarly, positions eight to 11 in the side are also largely settled.

Pat Cummins, Mitchell Starc and Adam Zampa are locks for the bowling unit, with the final seamer’s spot being a battle between Kane Richardson and Josh Hazlewood.

But positions five to seven are where Justin Langer and George Bailey (the two selectors in the UK) will deliberate most over.

And in short, it’s a five-way battle for the three spots.

Mitch Marsh is perhaps the most likely of the five to play, not only after his man-of-the-match knock on Wednesday morning, but also as the incumbent.

Marsh has played Australia’s last four ODIs: the three-game series in South Africa and the single match against New Zealand before the series was halted in March due to COVID-19.

He performed relatively well in these games, returning scores of 16, 36, 32 and 27 with the bat and bowling an average of six overs per game.

While his selection has often been a source of contention, he plays an important role in the balance of the one-day side and should he stay injury-free, at 28 he still has many years ahead of him.

Should the Aussies stick with four specialist bowlers and Marsh, Aaron Finch will need a sixth bowling option at his disposal.

The second all-rounder spot then looms as a battle between Glenn Maxwell and Marcus Stoinis. 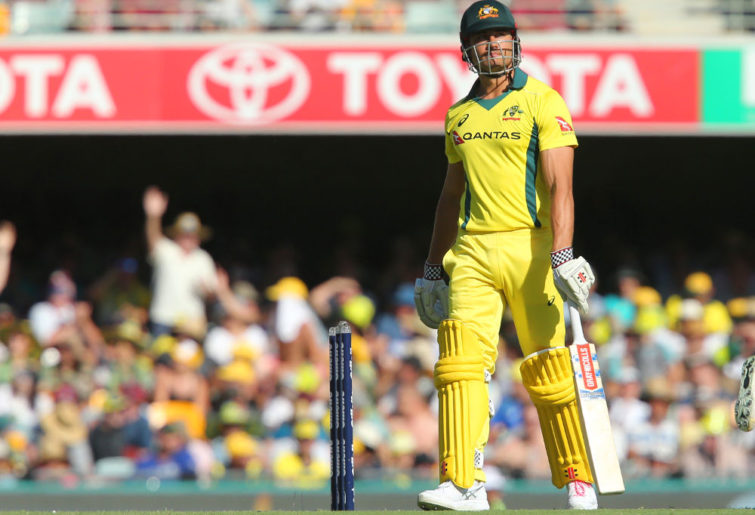 Neither have played a 50-over game for Australia since they lost the World Cup semi-final to England well over a year ago.

On any measure Maxwell is the stronger option in the middle-to-later overs, especially the huge discrepancy in strike rate between the pair (Maxwell 123.4 and Stoinis just 91.9).

He is also a handy second spin option (as shown in the T20 series), something that will be needed in Manchester where all three games are to take place.

But Maxwell perennially seems to leave the door open on his spot in the XI, and a series of poor shots in the last week hardly doesn’t help his cause.

Finally, the wicketkeeper’s spot is an intriguing choice between Alex Carey and Matthew Wade.

Carey has played every ODI since his debut against England in 2018, and since then has been the new darling of Australian cricket.

But his form with the bat has been poor of late.

On Wednesday morning he was dropped for Matthew Wade, an important distinction from Warner and Cummins, who were rested.

Wade looked far more comfortable facing Jofra Archer and Mark Wood than Carey, something that may factor into a decision for tonight’s series opener.

So while the Aussies go in confident of upsetting the world’s number one ODI side, it’s clear the only way this might happen is if the load is shared.

Should Langer’s vaunted top order fail, it’s time for the middle order to step up.