I know I’m echoing the opinions of many, many league followers, but the NRL Bunker has been a failure and its influence on the game should be reined-in rather than expanded.

Otherwise, we run the risk of ending up with a game as ponderous as the NFL. Yawn!

Barely a game goes by these days where the live game commentary on The Roar doesn’t reveal a high level of dissatisfaction and confusion with the Bunker’s decisions and the way they go about it. I really hate to be in agreement with Phil Gould, but many of the Bunker’s recent decisions are unfathomable, and the game may be heading for death by video.

When the high tech and expensive Eveleigh Bunker was launched by Todd Greenberg some years ago, we were told that its aims were to provide both the game and the viewers with accuracy, consistency, transparency and efficiency.

You really don’t need me to run through these four failed goals one by one, do you? Probably the only high marks would go to consistency, on the basis that the Bunker consistently fails to deliver on the other three. Two recent decisions in Round 18 clearly highlight to me that the Bunker is useless. 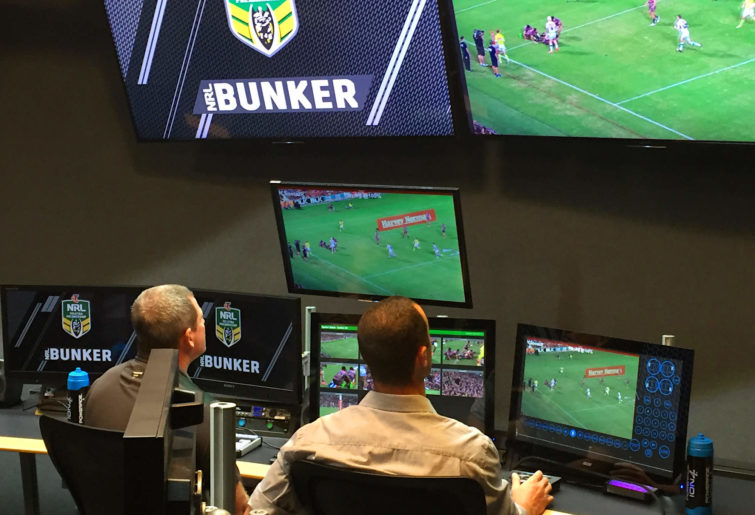 In the first, the Dogs’ Jayden Okunbor flew high to field a kick in the Manly in-goal, and as he came down to attempt to ground the ball, appeared to knock on. Linesman and referee obviously consulted and sent the decision to the Bunker as a no try.

After 14 replays the Bunker came back with the ruling of try, thus overruling the live decision. If they had to watch it this many times, surely there must have been enough doubt in their minds to stay with the ref’s call?

In the second, in the Roosters versus Knights game, Lindsay Collins scored a great second-half try against the Knights’ poor middle defence. The live ruling by the referee was no try and this was confirmed by the Bunker on the basis that a Knights defender was obstructed.

Rubbish! This was clearly a try. We now learn that Graham Annesley will review the Bunker process in the light of this particular decision. Apparently, the Bunker decision makers Jared Maxwell and former player Beau Scott couldn’t reach agreement, thus resulting in the no try decision.

Interestingly, Annesley refused to outline what their process was in reaching this decision. So much for transparency. And why isn’t the Bunker co-pilot a referee rather than a former player?

Another Bunker bugbear is the try review process. Often, a referee will arrive at an on-field ruling of try, and then send it to the Bunker, for example, just to check grounding. The Bunker then goes back to the start of the tackle and checks a whole heap of stuff (except of course a forward pass) all the way through to the grounding.

Why? And why not check all the other plays in the set leading up to the try while they’re at it?

The recently added captain’s challenge is another area where the Bunker is performing miserably. For a start, the scope of the challenge is limited to reviewing decisions made by the referee, for knock-ons and strips.

Non-decisions, like offside and forward passes, that aren’t picked up can’t be reviewed, even though a non-decision can be just as much of a howler, and as influential on the game, as a decision that is made. And the right to challenge is also limited, depending on whether the previous challenge was successful or not. In other words, it’s a gimmick.

All the Bunker really appears to be doing is adding another layer of human error to the game and slowing it down even more. Next we’ll have challenges issued from the coaching box, as they do in the NFL.

Recent reports are that the league is now investigating skeletal tracking technology, which will enable them to review and rule on forward passes. Presumably then the Bunker will then be able to review each pass leading up to a try to determine whether it was forward or not.

If it doesn’t drag the game to a halt then nothing will. League wasn’t meant to be played this way. I guess then we can look forward to technology to determine whether defenders are offside. I can’t wait for that.

Too much technology, together with the apparent inability to use it effectively, presents a real risk to the game.

The Bunker’s role should be limited to live reporting of foul play to the referee, particularly where it results in injury, or otherwise affects the run of play like an eight-point try. I’m happy to accept the decisions of referees and linesmen for everything else.