Whether it be in films, books or television shows, anything that attracts viewers is much more intriguing with conflict.

It is conflict that draws us in. Nobody would be interested in something if it followed a predictable script, and nothing triggers conflict like a villain.

Villains make us debate, they make us want to watch to see them fail, and follow their every move with intent.

Some may think that the branding of Novak Djokovic being a villain may be too harsh a call. However, whether he and his fans like it or not, that is where the player stands in the tennis world right now.

2020 has been one disaster after another for the Djokovic brand. The Serbian had already struggled to attain the affection of the tennis public, affection that seems to be showered at will on his legendary rivals Rafael Nadal and Roger Federer.

From holding an obviously ill-advised tournament during the COVID-19 pandemic – with no social distancing or any safety protocol whatsoever – to his disqualification at the US Open majors.

2020 has been a year like no other for the Serb, as the tennis world watches closely for what he does next.

The issue for Novak Djokovic, perhaps unfairly, is that when people speak of him, inevitable comparisons to Rafael Nadal and Roger Federer always follow.

Conflict is driven by binary opposites struggling for dominance over one another. Think good and evil, fire and ice, happiness and sadness, life and death.

For years, the tennis world witnessed this with Nadal and Federer. Both sets of respective fans argued the case for each of their favourite player’s crown as greatest player to ever pick up a racquet.

So when a third component joined the party, as Djokovic did when he exploded into the tennis summit – most of the tennis world struggled to accept this change.

Fans of Nadal and Federer see Djokovic as a natural enemy, one who they feel intruded on their battle. One who dares to stand up and go toe to toe with their heroes, therefore threatening Nadal and Federer’s legacy.

Djokovic is an unwelcome guest at the dinner table, a guest who has conquered Nadal and Federer to the point that the grand slam tally between the three players is separated by a mere three majors.

With each victory, with each trophy, the resentment for Djokovic and his fans grows incrementally. This was now personal.

Just watch any match between Djokovic and Nadal or Federer. The cheers for Djokovic are considerably quieter than for the man across the net.

Even in the most favourable of stages for either Nadal or Federer, the crowd will still pull for them, with an example of this being the 2013 French Open.

Nadal, having an almost guaranteed stranglehold over the major, was the heavy crowd favourite over Djokovic, yet the majority of the crowd chose to support the perennial champion rather than cheering for the underdog.

This has undoubtedly been tough and unfair on Novak. With each step he takes to achieving his goals and fulfilling his dreams, another dagger is struck into his simultaneous quest to earn the affection of the public.

Curiously, the question could be asked that while the public is reluctant to fully show their support for Djokovic, there seems to be far less reluctance to do so behind the next member of the tennis pinnacle club in Andy Murray.

While most of the public, apart from his own fans, have not warmed to Djokovic – they seemed to be less so with Murray. It is worth pointing out that Murray does have an inferior head to head record against the other members of the group and also has won considerably fewer majors than them.

Murray’s membership to the big four club was hard-earned, and marked by setbacks, which is perhaps why fans of rival players see him less as a threat.

Whilst winning two Olympic gold medals and three major titles would be enough for most players to take in a heartbeat, these achievements do pale when compared to the 17 majors won by Djokovic.

With a player who poses little threat, at least on Grand Slam count, to their heroes, fans would see no reason to turn their nose up at Murray.

While Murray is not immune from the occasional court outburst, for the most part the Scot comes off as quite likeable or at least tolerable for the tennis public.

Therein lies the difference between the two men in Djokovic and Murray and the possible source of the differing public affection to both men.

Djokovic has on more than one occasion pushed his limits with the relationship with his tennis audience, whether it be his repeated retirements in tournaments – having retired in all four majors – or his constant court outbursts, crowd arguments, questionable medical timeouts and even comments made towards other players from his coaches and family.

Some might argue that it is through conflict that Djokovic thrives, whether he may like this or not, and that this may be why the Serb holds a competitive edge over Murray. It is this ruthlessness, desperation and blindness to win at all cost that has pushed him within reach of Nadal and Federer’s Grand Slam haul.

A prime example of this is Djokovic’s knack for seemingly feigning injury, with acts such as appearing to struggle to breathe, moving irregularly and sudden falls on court – only for him to recover and move freely afterwards to go on and win the match.

During these matches, the Serb seemed to be ailing physically when the scoreline wasn’t favouring him – only to recover later and power on to win. Questions of gamesmanship from Djokovic must and have been raised during these occurrences.

Djokovic’s claims afterward that he “cannot really explain it” have done no favours to his popularity either.

While there is no rule that dictates you cannot legally do what Djokovic does, tennis has always been a gentlemen’s game. His gamesmanship is less accepted in this sport than say a player diving to win a penalty in football.

Unfortunately for Djokovic, while some can get away with such tactics, the Serb’s issue is that he is a man already and seemingly always trying to win back the public. Such actions will only further justify their opposition to him.

While Federer and Nadal are no strangers to pushing the lines to win, rarely or ever do you see them bend it to the extent and frequency that Djokovic does.

His paradox is that while he yearns for the adoration that his rivals possess, very rarely does he wish to do so at his own personal expense.

When challenged in 2013 regarding dangerously hitting a ball away and possibly injuring somebody, instead of even acknowledging it Djokovic went on the front foot and instead attacked the media for even daring to question him about this.

At this year’s 2020 US Open, the universe would have it that the situation would come back to haunt Djokovic, as he was subsequently disqualified from a tournament that he was favoured to win for hitting a ball at a line judge, albeit accidentally.

While the situation was undoubtedly an accident and almost could be called a freak occurrence, any sympathy for Djokovic was dashed in response to how he handled the situation after he was informed of the consequences.

Instead of addressing the media afterwards and owning up to his own mistakes, Djokovic immediately packed his bags and left the tournament altogether before later posting a long and drawn out apology hours later. Here was a chance for him to own his mistake and again he chose to save face over doing so. 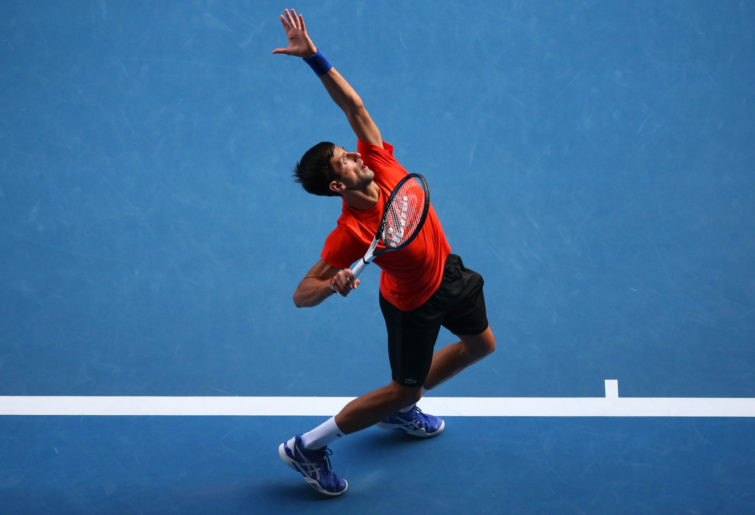 Interviewed later over the incident, Djokovic stated that while he would try to exert more control over himself, he could not guarantee it won’t happen again. The question had to be asked that while what he said was not wrong, did the second part really need to be stated?

Djokovic might also ask himself why he was hitting a ball in such a manner without looking to begin with, as rules are in place to discourage such behaviour. When a speeding driver crashes into another car, he didn’t set out to cause a collision. But why he was speeding to begin with?

The incident provided an exclamation point in 2020 for Djokovic. Even more damaging for him was that he further severed his relationship with the general public, not just the tennis public, when he decided to hold the ill-advised Adria Tour under no safety protocols at all amid the COVID-19 pandemic.

While some might dare to argue the ultimately good intentions of the tournament, there should be absolutely zero defence for why Djokovic and the players involved were seen partying shirtless and not maintaining any social distance during the tour.

The result? Djokovic and some of the players involved were diagnosed with the disease and the tour was shut down. Catastrophe.

Once again, he had a chance to apologise – but instead he went on the attack by playing the victim card, labelling the criticism as “malicious” and a “witch hunt”.

Just like his fabled backhand, Novak’s response to any threat against him has been attacking and unflinching.

In Djokovic’s statement regarding the Adria Tour, he made a point to say that it was held with the best of intentions, which showed that Novak truly believes in his story. He really believes he’s the hero trying to do the right thing.

His constant refusal to accept blame and rather go on the front foot suggests a man who believes he can do no wrong, and instead questions why the world dares to look down on him – when in fact he could do with some self-reflection.

Another polarising figure on tour is the firebrand Nick Kyrgios, but whereas the Australian accepts his role as a bad boy and almost revels in it, Djokovic seems to be stuck in a world where is unsure which he wants to be.

The time for solving this is sooner rather than later, for his own sake. The work ahead for his atonement is as grand as his achievements on court, while the time he has for doing so is perhaps even less than what the public currently thinks of him.