Wouldn’t you love to sit down at a pub and have a beer with Kade Simpson’s career? It’s hard to remember a time as a lifelong Bluebagger where I didn’t see what I now recognise as the famous number six step out onto the field and play a role like none other. I’ve always found Kade never even had to touch the ball, he just had to be around it in order to ease the tension of one of the most under pressure backlines of the modern era.

It’s not even about stats. When a player retires, people often automatically judge their career by how many goals, touches, Brownlow votes or September magic moments they have been involved in. They tend to judge things based on the polish and shine of all the external things that make up a footballer, but that’s just not the case here. Polish and shine come into effect when you describe the tenacity, loyalty and hunger of Kade Simpson and his relationship to not just Carlton, but the AFL as a whole.

How many men in the AFL can you describe as truly loved by all? Even the greats have an enemy, people who are either jealous they never had them on their team, or are jealous of their accolades, but I’ve never met a person who doesn’t admire what Simpson has done in his career.

Old football heads will tell you the idea of loyalty is dead and, to a certain degree, they’re correct – it is becoming increasingly uncommon for a player to be even over 125 games at one club in the modern era, but I have a theory.

So often in the past, you heard of the cancer of a football club, a player who may be the best on the team but was not a team player. Traditionally speaking the thought was, “well, we must keep that player, he’s the best – right?” Wrong.

In the modern era, an era where it is as much about the team as it is the individual, people are moved on when they do not fit – but never Kade. Simpson is to Carlton what Mr. Brightside is to the male population after six beers, everything you could want and more. To Kade, and God forbid you ever read the inner ramblings of a Carlton supporter, I couldn’t stress more how indebted we all are to not only your on-field tenacity, heroics and poise under pressure, but to your continued love and loyalty to a losing club in the prime years of your life. Even writing this, I have so much to learn from Kade, we all do.

I say, hang up the six. There will be no man and has never been a man to wear it better – and should be truly immortalised into the history books of the Carlton football club. It won’t be the same without you, but thank you for showing us all that moments come and go, but loyalty never changes. 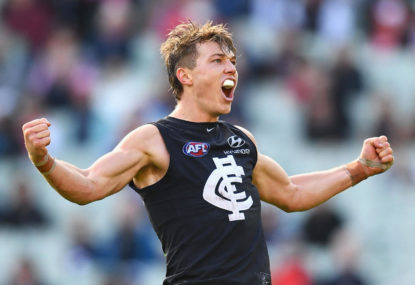 A frustrated David Teague has dismissed talk of the pressure ramping up at Carlton after the Blues slumped to a 0-2 start for a ninth-straight AFL season. 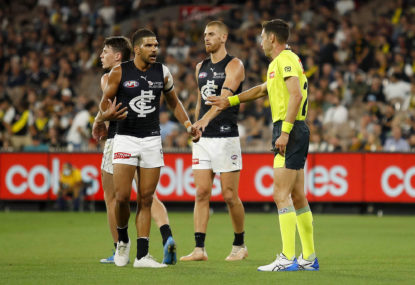 Carlton fans to converge on MCG for clash

Seven days after being drowned out by the Richmond faithful, Carlton supporters will converge on the MCG and comfortably top the biggest sports crowd in Australia since the COVID-19 pandemic began. 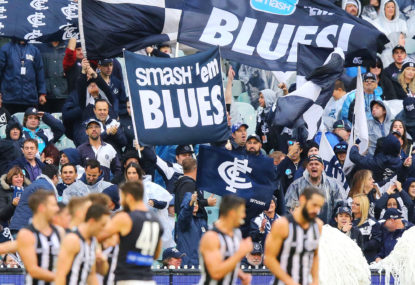 Carlton fans to converge on MCG for clash

Carlton vs Collingwood Round 2 preview

Carlton, following an impressive display against Richmond last week, will take on Collingwood in Thursday night’s blockbuster at the MCG. 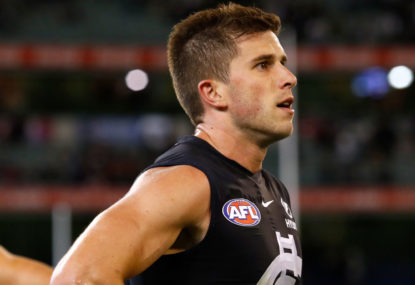 Carlton vs Collingwood Round 2 preview

Is Carlton and Collingwood the earliest elimination final in recent memory?

If the AFL can introduce a new rule just one day before the season starts, without properly trialling them, then it’s only fair we cast final judgement on them straight after one game.