But overall, it is a positive change that improves rugby league as a sport.

The consistency of those set restarts isn’t a major concern though, as even before it was introduced, fans argued over what was and wasn’t a ruck infringement for over a century.

Throughout all the debate about the new rule for set restarts, there are two issues we rarely seem to hear from commentators or read in articles that I’ve been concerned with over the last few months.

First of all, if the set restart call is given inside your own 20 metres, or even your own half, on the first couple of tackles and you are struggling to get out of your own area, wouldn’t most teams prefer a penalty and piggyback 20 or 30 metres up field? 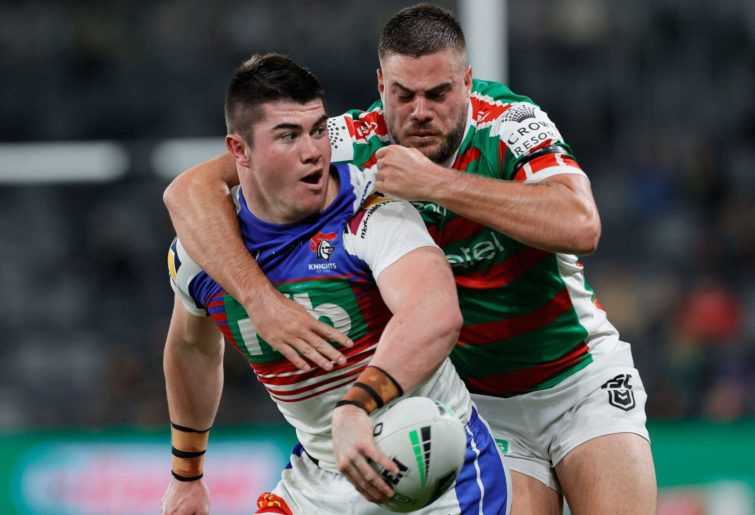 As much as I like the rule in general, I do see a lot of teams happy to concede these penalties and a general trend to hold down a little longer in the first two tackles close to an opponent’s own goal-line.

The question is whether attacking teams get the choice to take the kick instead of the restart or the referee only calls restarts inside the attacking team’s 40-metre line, conveniently marked by a red line.

Offering the choice would take too long and slow the game so it would be better to automatically give penalty kicks inside the 40, giving the maximum advantage and reducing the number of teams intentionally slowing the play down on the first couple of tackles.

The other issue, which is less common but has occasionally happened, is when a team drops the ball or performs some other error on the first play after a restart.

Normally for one knock-on followed by another, the ref decides on whether or not an advantage has been gained, so I would expect this to happen with the restart rule.

Yet on two occasions I remember, one being the Sharks against the Cowboys a few weeks back, the attacking team dropped the ball immediately after the set restart and the knock-on was called.

Surely it makes sense that the attacking team has to have gained some advantage after the infringement otherwise the referee should call a penalty. It may be a rare occurrence but it is something that could be looked at in the off-season.

These are two relatively small changes that would improve the game and make it fairer for the team impeded in the first place.