Home to Supercars for the next fortnight, the impressive facility outside the town of Tailem Bend saw plenty of drama for the first of two SuperSprint weekends with plenty of championship implications.

From a drought-breaking victory for a veteran to a blow in the standings for the seven-time champion, here are the talking points from The Bend SuperSprint.

However, a solid drive in the opening leg of The Bend SuperSprint yielded a victory for the 38-year-old veteran, his first since the Perth SuperNight event more than 12 months ago.

Also celebrating his 200th round in the Supercars championship, Coulthard started fifth for Race 25 and ended up in a four-way battle for the win, while title contenders in McLaughlin and Jamie Whincup both had difficult days.

Shane van Gisbergen inherited the lead of the race on the opening lap after McLaughlin and Whincup came to blows at Turn 17, though after pitting on lap eight the Red Bull Holden racer struggled massively with tyre degradation.

This was music to ears of Coulthard and Tickford’s Jack Le Brocq, who both began hounding Van Gisbergen. The leading Kiwi, however, in typical fashion, would not yield, allowing Lee Holdsworth and the recovering McLaughlin into contention also.

Coulthard and Le Brocq jostled for positions on lap 22 before the Shell V-Power car took to diving down Van Gisbergen’s inside into turn one for the lead. The Supercheap Auto Mustang of Le Brocq also relegated the Red Bull car, who on degraded tyres dropped to ninth.

Not even half a second separating them, Coulthard crossed the line for this first win in 41 races over Sydney Motorsport Park winner Le Brocq, while dramas between Holdsworth and McLaughlin allowed rookie Bryce Fullwood to sneak through for a maiden podium for Walkinshaw Andretti United.

Fourth in Race 26 and then second in the final race of the weekend to complete a Shell V-Power one-two finish saw Coulthard win the round overall in what was the Kiwi’s best showing of the season.

That has provided the leading Ford squad with a healthy boost of points in the teams standings too, as the gap to Red Bull Holden Racing Team is extended to 104 points. 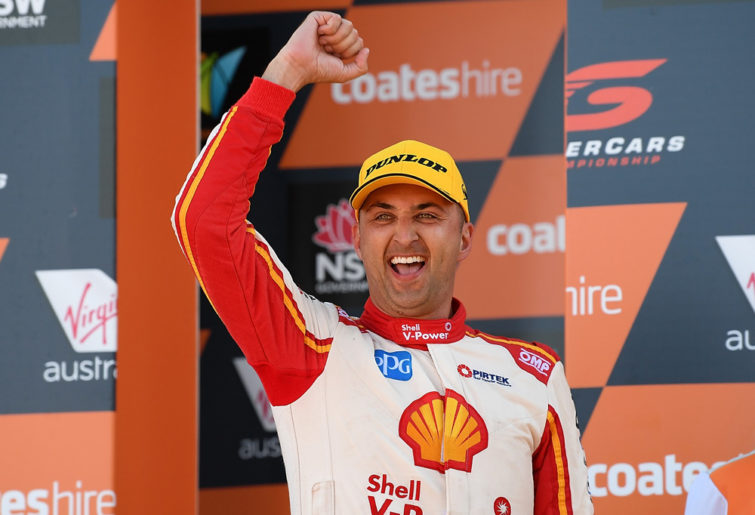 Drama for championship contenders
As hinted above, McLaughlin and Whincup fell foul of some drama during Race 25 that ultimately cost the seven-time Supercars champion more as far as the points tally is concerned.

McLaughlin made a blinder of a start from the front row, breezing past polesitter Chaz Mostert, who had claimed his first pole for new team Walkinshaw Andretti United. Whincup, who’d started first, also put himself ahead of the Appliances Online Commodore.

The pair were nose to tail for most of the opening lap before Whincup made the bold manoeuvre down the inside to pass the championship leader into turn 17. With enough room being left by McLaughlin, Whincup lost control of his Red Bull Commodore and when correcting his steering made contact with the Shell V-Power Mustang and sent it into a spin.

A 15-second penalty was briskly handed down to Whincup by race control, who from eighth ended up serving the punishment during his mandatory pit stop on lap five. McLaughlin, meanwhile, plummeted down to 17th and also pit on lap five to switch soft tyres and race his way up the order in some clean air.

It was something the reigning champion did also, coming back up through the 24-lap race to fifth and in the hunt for a podium. However, on lap 22 McLaughlin found himself making unnecessary contact with Holdsworth at turn 14, which sent the Tickford Mustang out of podium contention.

McLaughlin’s move on Holdsworth was down the inside of the left-hander, and while the Tickford car left the required car width of room, the Shell V-Power racer had tagged his fellow Ford driver in a desperate attempt to pass.

This resulted in a 15-second penalty for McLaughlin, who on track finished third, though he had that position immediately passed onto Fullwood and Walkinshaw Andretti United. Still, the Kiwi was classified 15th and ahead of Whincup, who finished 19th, though these mistakes could prove costly as the championship edges perilously closer to its climax.

From bad to worse for Whincup
The seven-time Supercars champion’s deficit in the title race was extended to 151 points coming into the back-to-back races on Sunday, and that gap only grew after a difficult Race 26 for Whincup.

Qualifying down in 11th while championship rival McLaughlin was on pole position, the 37-year-old had an uphill battle in the midfield to catch and challenge the cars ahead.

All hope was lost, though, during his pit stop, which saw a costly delay with the air spike and getting the car up on the jack for the mechanics to change the tyres. The error put the Red Bull Holden racer put down into 19th.

While McLaughlin was unable to win Race 26 and finished in third behind winner Van Gisbergen and Andre Heimgartner, it was a lowly 17th for Whincup, which ultimately saw the gap in the standings extend to 201 points.

Starting from a much more comfortable third for the final race of the weekend, Whincup survived a late tussle for Anton de Pasquale to claim a podium finish and take home one trophy for The Bend SuperSprint.

Initially the Red Bull car dropped to fifth on the start, but during a long first stint he was able to pass Nick Percat and Mostert before on fresher tyres being able to eventually get a move done on De Pasquale four laps from the end of the race.

Overall it was a disaster of a weekend for Whincup in terms of the championship as McLaughlin was able to stretch out his lead in the standings to 215 points. Only three races remain from next weekend at The Bend before the Bathurst finale.

Winner McLaughlin is IndyCar bound
While the reigning Supercars champion dominated Race 27 for his tenth victory of the season and also extended his lead in the standings, the big news coming into The Bend SuperSprint was the confirmation of his IndyCar debut in 2020.

Team Penske at last announced 27-year-old McLaughlin was bound for Florida immediately after the conclusion of the Supercars season at the Bathurst 1000 to contest the IndyCar finale at St Petersburg.

During the preseason McLaughlin tested the Chevrolet-powered Team Penske IndyCar with the plan for the two-time Supercars champion to race at the Grand Prix of Indianapolis as the fourth Penske entry.

However, those intentions were derailed due to the impact of COVID-19, and the chances for McLaughlin to race in the United States looked grim for 2020. Now it all depends on the Australian government approving a travel exemption for the Kiwi to leave the country and head Stateside.

Now with a 215-point lead in the championship, McLaughlin is closer to his ambition of securing a 300-point advantage before the Bathurst 1000 finale, which comes after the second round at The Bend Motorsport Park, which’ll use the shortened ‘West’ circuit layout.

“Our plan has always been for Scott to run a race in the IndyCar Series this season, but we never wanted to take the focus away from the main goal, which is winning another Supercars championship,” Penske president Tim Cindric stated.

If the debut goes ahead, McLaughlin will line up in the No. 3 car adorned with the same Shell V-Power livery as he races in for the Supercars alongside Penske stalwarts Will Power, Simon Pagenaud and Josef Newgarden, who is hunting a third title.

The IndyCar Grand Prix of St Petersburg will take place on 25 October. Only three races remain in the American open-wheel championship.

Cream still rises to the top on soft tyres
One of the big bones of contention when Supercars resumed its championship at Sydney Motorsport Park back in June was the limited tyre compounds that would be available per weekend for each driver.

The total has been left capped at five sets per weekend, though there have been rounds where that has been a mix of the Dunlop soft and hard compounds that created some exciting racing and mixed results.

Among that, however, there was still criticism that the outcome was artificial and gimmicky. That said, after seven weekends of having only five sets available across the three sprint races, it is time to deliver a positive verdict.

Ultimately the cream was still able to rise to the top with the limited tyre sets, and it hasn’t really changed the face of the championship hunt much if at all. McLaughlin and his Shell V-Power Racing crew seem to have adapted to it better than everyone, while surprise performers Brad Jones Racing and Team 18 have been welcome for variety.

At The Bend it was again a split between the Shell V-Power team and Red Bull Holden Racing Team as far as outright performance was concerned. Cars suffered from thermal degradation across this round, which was different to the tyre wear seen at Sydney Motorsport Park.

This was seen with the Red Bull cars on Saturday and also to a more severe degree with Mostert and Walkinshaw Andretti United, who even admitted that leaning towards a faster qualifying car meant they would struggle with degradation during the races.

Mostert, despite qualifying inside the top three for the trio of 24-lap sprints, failed to finish in the top ten for either one of them. Combined with the long loaded corners of The Bend, it put emphasis on teams finding that balance with their set-up to achieve the results the leaders are currently finding.