The first dictionary definition of the word supplied by Merriam-Webster is “the divine reason regarded in Neoplatonism as the first emanation of God”. I think we can safely move past that one, in terms of professional sporting performance.

The second offering is far more apt: “common sense, alertness”. The Cambridge English Dictionary chimes in with “good judgement and practical ability”, and the even more pithy “horse sense”.

When the Brumbies coaches selected Lachie McCaffrey in their back row for the Super Rugby AU final against the Reds, the sounds of jaws combing the ground were faintly audible. After all, McCaffrey had been picked ahead of Rob Valetini, who had been selected in Wallaby head honcho Dave Rennie’s first squad. McCaffrey did not feature in that group of 44.

But what the Brumbies coaches did made good practical sense. It gave them three back-rowers who had all started professional rugby games at number 7, to counter the Reds’ outstanding young loose forward trio, and that mattered. It showed nous.

Lachie McCaffrey would not pretend to be in Valetini’s class purely as a rugby athlete, but he has accumulated a wealth of practical experience on both sides of the world. During a globetrotting career which has taken him as far afield as the unforgiving battleground of Welford Road in Leicester, McCaffrey has picked up priceless horse sense.

It can be defined as “an ability to push the limits of the envelope against the opposition to the extreme, without exceeding the boundaries set by the referee”. McCaffrey knows how to get the most out of himself in key games, and tread the tightropes of the law without losing his balance. The details of that rare ability seldom make it to the highlight reels, but we can delve into at least some of the nooks and crannies.

Let’s start at the beginning. In the 51 minutes that he was on the field, Lachie McCaffrey provided a rock-solid foundation at kick-off receipts, taking four restarts without dropping one. In the process, he convincingly won his battle with the Reds’ main kick-chaser, left winger Filipo Daugunu.

In the first example, McCaffrey draws the high ‘seatbelt’ tackle and a penalty. Then Cadeyrn Neville cleans out Daugunu for good measure and dumps him on his back. Brumbies hooker Folau Fainga’a offers a few quiet words of advice to the Reds wing and ruffles a few more feathers. Daugunu is already seeing red and is on the rocky road to a loss of composure without fully realising it.

The visible breakdown in discipline did not materialise until the second half, in an identical scenario. McCaffrey catches the ball, draws Daugunu into a tip tackle, then rolls on the ground just to make sure the referee did not miss it. The incident attracted a yellow card from Angus Gardner, but it did not prevent McCaffrey getting his arm down to cushion the fall, and it did not stop him from placing the ball accurately after it either. Nous. 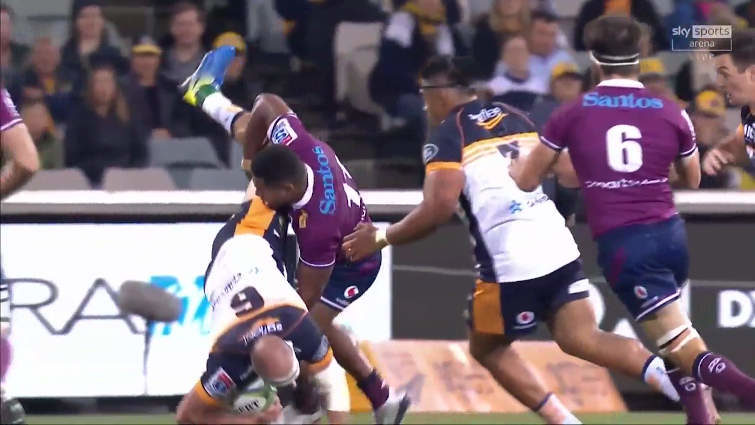 McCaffrey was the Brumbies top forward ball-carrier with 15 carries and two offloads in contact, but he only accrued 32 total metres. The stats do not tell the tale – his work in the mechanics of ball-placement at the tackle were unfailingly accurate:

In both cases, the initial cleanout has not been effective and McCaffrey is momentarily exposed on the deck with a Queensland threat above him. This is where practical intelligence comes in. In the first example, the Brumbies man curls his body into a question-mark and makes a long placement to take the ball away from a looming JP Smith at just the right moment: 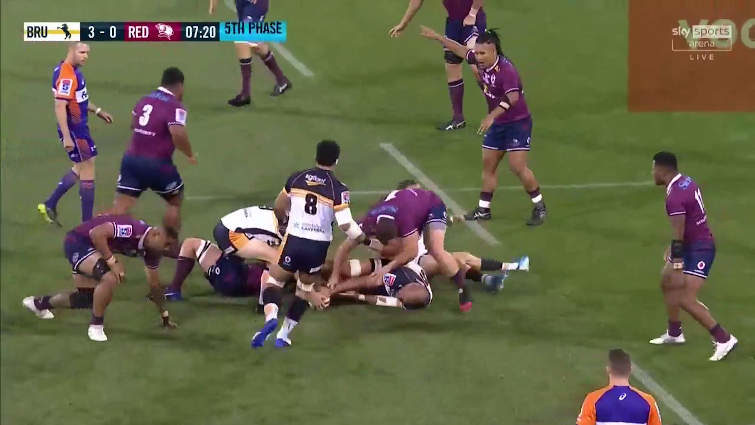 In the second instance, he manages to make a second movement on the floor undetected, but without crawling forward and drawing an automatic penalty from the referee. 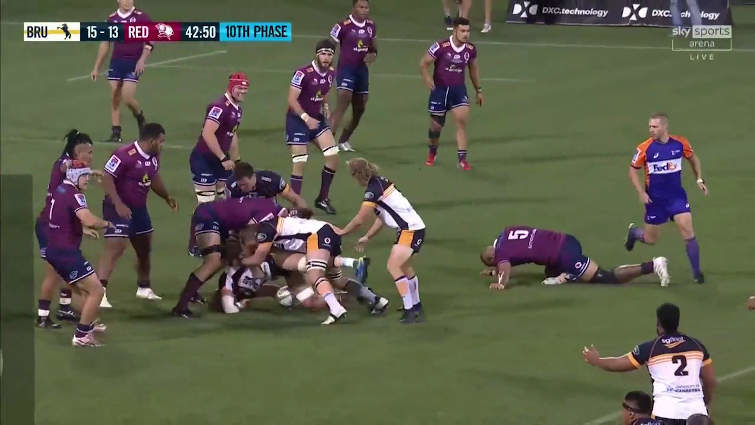 This is rugby nous in action, playing to the outer limit of the laws of release at the tackle without attracting a penalty.

Whenever Fraser McReight hovered in anticipation of rich pickings at the tackle area, it looked very much like it was McCaffrey who had been detailed to remove the young Queensland tyro:

The first of the two examples is instructive. McCaffrey is standing directly opposite McReight at the head of the first ruck, then he tracks and cleans him out decisively at the second. Both cleanouts are executed with vigour so that McReight cannot remain anywhere near the ball when Joe Powell goes to pick it up and continue the attack.

McCaffrey’s selection of cleanout method also demonstrated his practical intelligence. With the Brumbies looking to release Tom Banks off a trademark inside pass off 10, their experienced flanker looks to stay on his feet and drive Taniela Tupou back past the ruck to clear a running channel for the Brumbies fullback:

Once again, he is careful not to take the block too far and attract a penalty for downfield obstruction on Tupou: 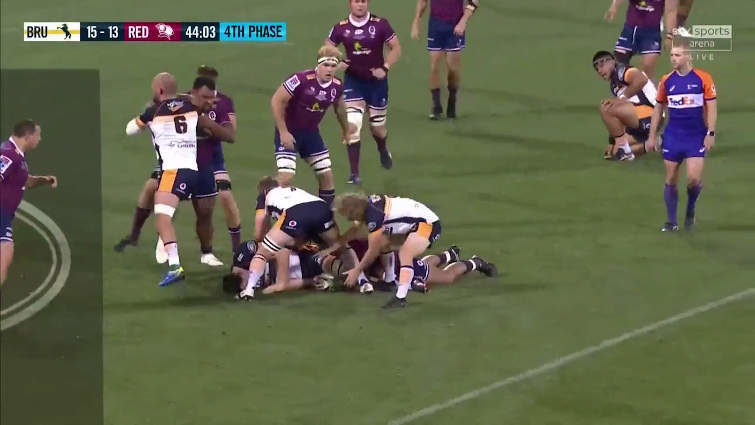 In the event, the Reds prop is able to get around the block, but McCaffrey has at least done his job and given the play a chance.

He had more luck on a kick return by the other Tom in the Brumbies back three, Tom Wright:

At the critical moment, McCaffrey shoulders Bryce Hegarty out of the running lane, leaving McReight exposed in a one-on-one with Wright: 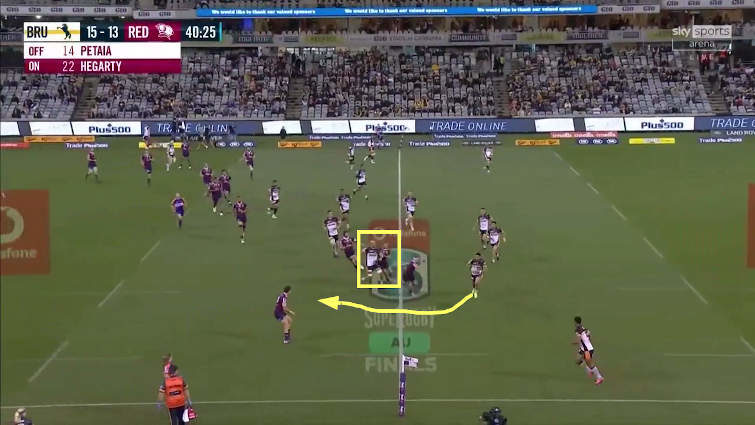 The force applied is enough to do the job, but not sufficient to attract refereeing ire. Nous.

When the Brumbies scored their first try of the game from a driving lineout, McCaffrey’s contribution was just as significant:

As the maul sets, McCaffrey is the eighth forward, observing matters from the number 10 channel. It is his job to decide the right time and place to add his power to the drive.

He enters as soon as the ball is shifted to the back and in the hands of Folau Fainga’a. McCaffrey is careful to bind on to the Brumbies hooker first (no penalty for obstruction past the ball) before moving past him, and directly in behind the Canberra maul director-in-chief, tighthead prop Allan Alaalatoa. Triple-A is the man to follow in these situations.

It was no accident that there was only one man doing the talking as the Brumbies regrouped in their own half after the go-ahead score:

When the deep breathing stops, it is not one of the Brumbies’ present or future Wallabies stars leading the way, it is Lachie McCaffrey.

At this stage of his career he will probably never don the green and gold, but he can rest easy in the knowledge that nobody did more, in a practical, understated way, to bring a Super Rugby AU title to Canberra.

Summary
Dan McKellar and his fellow coaches unquestionably got their selection right when they picked Noah Lolesio at number 10 and Lachie McCaffrey at number 6 for the final against the Reds.

Lolesio gave them the threat of a running 10 playing flat on the line that had been lacking in the previous match between the sides at Suncorp Stadium. McCaffrey gave the men from Canberra an extra number 7 on the field – one more than the Reds – while adding incalculable nous and leadership to the team.

McCaffrey played a lot of rugby for the Leicester Tigers in England, and he played it as an openside flanker. If he did not know it already, he would have learned to niggle and needle his way through a game at Welford Road, and play to the outermost limits of the law while encouraging opponents to step across it. 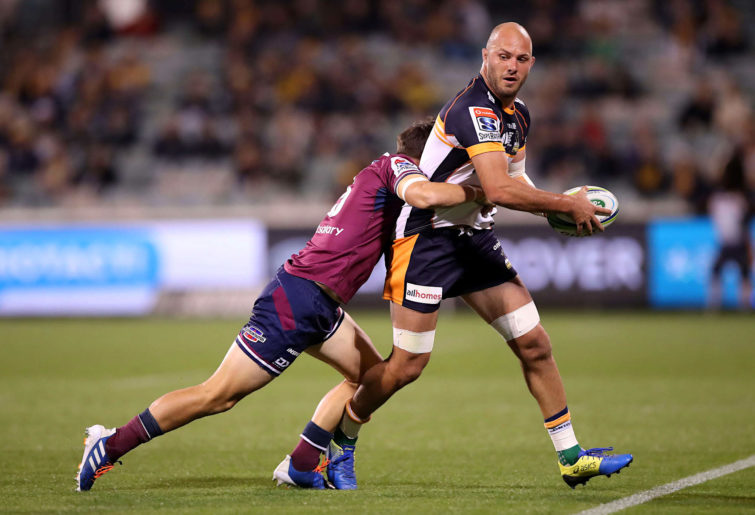 This is exactly what he did at GIO Stadium. He got the better of Filipo Daugunu on restarts and drew a yellow card on the Reds wingman at a crucial time in the second half.

He carried the ball more than any other forward and ensured the Brumbies got it back on favourable terms, and he policed Fraser McReight effectively on the cleanout and helped shut him out of the game.

His play in the grey areas of refereeing was far in advance of anything the young Reds forwards are capable of, at least at this stage of their careers. It was a bravura performance, not of pure athletic ability, but of accumulated rugby horse sense. Journeymen careers matter.

Lachie McCaffrey may not be Robin of Sherwood, but Nottingham is sufficiently close to Leicester that it hardly matters. He stole from the Queensland Reds, and he even nicked something off the referee, but he gave it all back to his teammates on the biggest stage in the domestic game. Nobody could ask for more.