The previous four editions can be found here.

N. Noa Nadruku
The coverage of the Raiders winger’s extraordinary 1997 bender highlighted the way that expectations of player behaviour and the media’s subsequent response had permanently shifted. He was shipped off to the Cowboys at the end of the season.

O. Robbie O’Davis
The Knights fullback was able to leapfrog his way to the top of the representative queue, but had a more noteworthy experience after a positive drug test in 1998. His usage of androstenedione in the 1997 ARL competition was permitted, but O’Davis said he was unaware that it had been added to the banned list at the end of the year.

Facing a two-year suspension, his lawyer successfully argued that O’Davis was still contracted to the ARL and was thus not under the jurisdiction of the NRL. This loophole applied to every single player in the new competition, which led to every player being forced to sign a new contract with retrospective powers. In the end, with public opinion now firmly against him, Robbie O’Davis served a 22-week ban.

P. The Pleasure Machine
The war showed that the strength of player contracts could vary widely. Anthony Mundine encouraged Super League Australian prop Solomon Haumono to join him at the Dragons. The clear roadblock, however, was convincing Canterbury to release Haumono from his contract.

Enter Gabrielle Richens, the British model known as ‘The Pleasure Machine’. After going AWOL from the Bulldogs, Haumono – with Richens in tow – turned up on The Footy Show, claiming he ran off in the name of love. The stunt drew mixed results for the pair, who had in fact met for the first time in the green room on the night of their appearance.

Richens earnt a small publicity bump that didn’t really lead to anything in Australia, and Haumono got his release, eventually. In the end, his Dragons career lasted all of two games.

Q. QCs and the courts
So many breached contracts, so many injunctions. The lawyers were the true winners of the war. On a side note, one of the junior News Limited lawyers was David Gallop. He must have made a good impression.

R. John Ribot
Too much bile forming to write this. Let’s look at someone else.

R. Aaron Raper
Because of the increased representative opportunities on both sides of the war, many players gained career-improving confidence. This was not the case for Aaron Raper. Despite missing out on selection for City versus Country and State of Origin, circumstances conspired for him to be the only specialist hooker in the Australian World Cup squad in 1995.

He was selected to play in the 80-point win against South Africa, but underwhelmed in the eyes of Bob Fulton, replaced for the rest of the tournament by the Andrew Johns-Geoff Toovey halfback and hooker sharing experiment.

Another opportunity didn’t come until 1997, chosen to start in the second Origin game. Coach Tommy Raudonikis, however, made a late selection reshuffle, shifting Raper to the bench, where he sat for the full 80 minutes. It must also be noted that the game was played under unlimited interchange. His career petered out from there.

S. Craig Smith (both of them)
Craig Smith, the Melbourne winger, should never have set foot on a rugby league field, having lost a kidney in his youth. Ultimately, the war cut his career short, with the reduction of teams leading to no clubs offering him a contract for 2000, despite being the competition’s top scorer in 1998 and winning a grand final in 1999.

Craig Smith, the Dragons prop, prior to his tactic of fending off tacklers with his knees, played for Queensland in 1997 despite not living outside of New Zealand until the age of 18. Presumably the Maroons needed special dispensation that year since the likes of Martin Bella and Mark Tookey were clearly diminutive halfbacks. It’s baffling how Cane Toad supporters can so blindingly get behind their mercenaries. But I’ll never get it because, like their players, I’m not from Queensland.

T. Gorden Tallis
In 1996, Super League-aligned players refused to participate in Round 1 of the ARL competition. Most returned the following round but there were three notable exceptions: Matthew Ridge, Ian Roberts and Gorden Tallis.

Ridge, whose career eventually sputtered out at the Warriors, returned mid-season and was a key factor in Manly’s premiership victory. Roberts, prior to a bad knee cutting his time at the Cowboys short, sat out the whole season, including the grand final.

He was joined in this stance by Tallis. The second-rower’s disappointment about missing his first decider would have been tempered by three premiership in the next four seasons, including a Clive Churchill medal, and instant representative selection, eventually captaining his state and country. 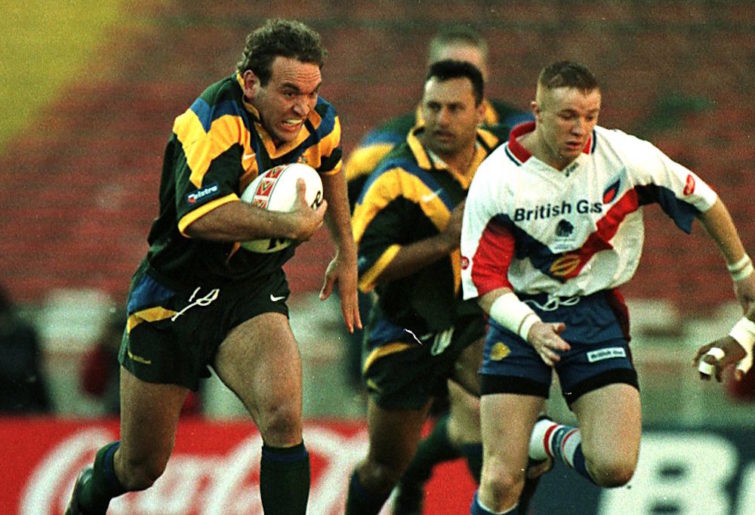 U. Rugby union players
Although already in the pipeline, the professionalisation of the 15-man game was accelerated by the events of the Super League war. With the ARL not rolling over to provide immediate pay TV content, and that competition suddenly being the home of irresistible salaries, Rupert Murdoch needed to act.

As a result, his English BSkyB network, along with Foxtel, had immediate content, with improved quality and the reduction in talent drain through newly full-time players. Ultimately, defections changed from leaving rugby union to joining it.

W. David Woods (both of them)
David Woods, the Eels centre, represented missed opportunity. A prodigious talent in a poor early ’90s back line, injuries repeatedly struck when on the verge of representative selection.

David Woods, the Seagulls prop, took his own life in the 1996 preseason. At the time, when players were receiving unprecedented coverage, I missed this tragedy entirely, assuming he had retired.

The Super League war may have provided pay increases for the two David Woods, but it also opened up the recognition of the need for best practice injury management, education for retirement, and – most importantly – mental health education, openness and assistance. Player welfare could still be better, but the game is moving in the right direction.

X. Mr X
Journalists survive on headlines, and the Super League war provided an infinite source of material. Every vaguely noteworthy player could generate multiple articles, including speculation on their contracts, what had been confirmed, their new clubs, and whether or not they were trying to escape their newly signed deals.

For journalists, writing under a pseudonym meant they could protect their sources and print more unconfirmed information, which made anonymity appealing. A cynic would suggest that some would write rumours under a fake name so they could subsequently write a profile-enhancing confirmation or refutation under their real name. But I’m sure that never occurred.

Y. Yes Optus
The war sent potential backers running for the hills, with the issue exacerbated by the new ban on tobacco advertising. Optus, they of the ‘Yes’ slogan, stepped into the void as the ARL’s major sponsor. The telco also hurriedly put together a pay TV network that ultimately collapsed. Ironically, Telstra – well established and still mostly Australian-owned at the time – bought the naming rights for Super League.

Z. Zebra-striped referees
The initial Super League signing raid was not limited to players, with referees also targeted. The ARL responded by firing those who sided with the rebel competition. Given that the competition had already added two games per round, it left a shortage of officials with first-grade experience.

More referees were required in 1997, with two more teams across each competition and the introduction of the video referee, notwithstanding that the ARL abandoned their system after the pre-season.

Using the Super League referee uniform design to address the letter Z may seem tenuous, but the alternative would have been the goal-kicking statistics of Nick Zisti.

Next week: season by season.