Even rival coach Josh Hannay felt for Brisbane after the once-mighty Broncos collected their maiden NRL wooden spoon in the club’s 32-year history.

But departing Broncos great Darius Boyd is convinced the six-time premiers can bounce back and play finals next year.

And he believes Kevin Walters is the man to spark the revival.

Brisbane’s woeful 2020 mercifully came to an end when they were relegated to dead last for the first time by a 32-16 loss to North Queensland at Suncorp Stadium.

It was also an inglorious end to ex-skipper Boyd’s otherwise stellar 337-game career.

Positives were hard to find after Brisbane ended a horror year that included a club-record 11 straight losses, their most defeats in a season (17), their most points conceded (624), their lowest season points tally (268) and their worst points differential (-356).

It was enough to earn sympathy from interim Cowboys coach Hannay.

“They are our fiercest rival…but this year I have witnessed the torrent of abuse that has come their way,” he said.

“And after being consigned to the wooden spoon there is going to be a fresh wave of abuse and criticism.

“They are considered the evil empire in many people’s eyes, but I look at what they have gone through this year and I really do feel for them – I hope their bounce back is swift.”

Boyd was confident it would be after looking at the talent in the Broncos dressing room rather than the NRL ladder on Thursday night.

“In my opinion, having a new coach, a new system, the boys putting this year behind them, getting out of the bubble and if they re-group and refresh and have a real strong pre-season with a defensive mindset I think this group can easily get into the top eight next year,” he said.

Former Broncos premiership-winning captain and current Queensland mentor Walters was interviewed for the Brisbane 2021 gig on Thursday along with ex-Cowboys mentor Paul Green.

Boyd reckoned there was only one man who could turn it around for Brisbane.

“At the end of the day the club needs to make a big decision.

“Kevvie has been around for quite a while, his record speaks for itself as a player and assistant, I know he hasn’t had a head coaching job…but I think the fans will get behind Kevvie.

The Broncos secured an NRLW threepeat against the Roosters- but not without drama! 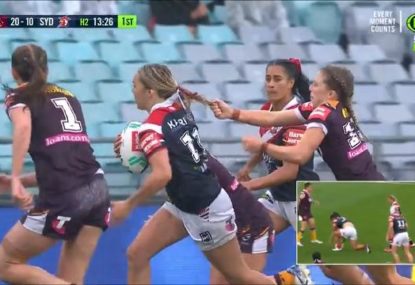