Initially starting 0 and 2 prior to the stand down the writing was already on the wall. Losses to the Tigers and Panthers which should have been winnable games given that both teams missed the finals in 2019.

Then came the stand down which could have given the Dragons players and coaching staff an opportunity to reset. After all, the infamous Gus Gould review of the staff at the end of the disastrous 2019 campaign was meant to be the solution.

Ben Hornby was out and Shane Flanagan was in to mentor Paul McGregor with James Shepherd serving as an assistant. Dean Young was retained but he was relegated to the sideline checking interchanges and injuries.

Come May 30th over two months since the loss to Penrith the Dragons were comfortably beaten by the Warriors 18-0. If alarm bells weren’t ringing loud enough the Dragons were then beaten the following week by 2019 wooden spooners the Bulldogs 22-2.

Given the shorter 20-round season, it was already over. The Dragons had dropped the first four games all against teams who missed the finals in 2019. They never recovered.

Then the melodrama started. An emergency board meeting was held and the predicable vote of confidence was given to Paul McGregor.

However his authority as head coach was severely curtailed. Team selection was to be now decided in a committee and the responsibility for coaching attack was given to Shane Flanagan.

Marquee signing Ben Hunt was dropped to the bench as a replacement dummy half and 25-yr-old rookie Adam Clune was debuted at halfback. Curiously, Corey Norman seamed to escape any scrutiny and remained at 6 while Ben Hunt was to spend the majority of the remaining season at dummy half.

Then came a resurgence of sorts with wins against the Sharks and Titans, the win against the Titans was also Warhorse James Graham’s final game in the NRL. But of course these wins were followed by losses to the Roosters and Raiders.

A convincing win at home against a undermanned Sea Eagles had hopes rising followed by some redemption by beating the Bulldogs second time around. But once again any momentum was lost with three consecutive losses against the Sharks, Rabbitohs and Roosters.

At that point after Round 13 not only was finals footy in 2020 out of reach but obviously after six and half years in charge Paul McGregor was never going to be the man to lead the Dragons back to greatness. Finally the decision came down from the Board that McGregor had to go.

The Round 14 match up against Parramatta would be McGregor’s final game in charge and seemingly out of the respect the team rallied and won in a tight finish. The 80-minute performance against the top four Eels had many wondering where this form had been?

With McGregor now gone and Shane Flanagan still serving his NRL coaching ban, Dean Young was appointed interim coach for the final six rounds. First up came the Broncos in Brisbane and a confidence-building performance the Dragons prevailed 28-24.

Then Young’s coaching dream turned into a nightmare with tepid efforts from the playing group and losses to the Titans, Cowboys, Raiders and Knights. The loss to the Knights stung a little more because it meant the loss of the Alex McKinnon Cup. The Cup was the only silverware the Dragons held and the side had never lost the Cup before.

Young’s post match interviews were refreshingly honest but also showed his frustration in not being able to get his side adequately prepared for game day. Frankly the Dragons middle defence particularly against the Raiders and Knights was soft and embarrassing. In Dean’s own words “We wouldn’t be able to beat Dapto with a performance like that.” 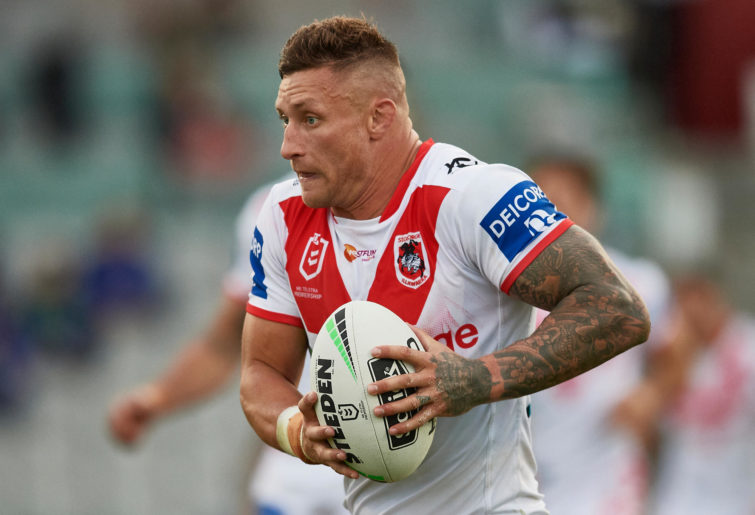 With Dean Young’s head coaching dreams going down in flames the brains trust at the Dragons decided to buck tradition, recruit externally and chose Anthony ‘Hook’ Griffin. Griffin, with his 55 per cent winning record, was a popular choice with fans but there were some conflicting opinions in the media stemming from Griffin’s time at Penrith.

Griffin had fallen out with Gus Gould and Gould having performed the 2019 review where he recommended to McGregor be retained put him at odds with the Board’s decision. Nine Media was critical of Griffin but News Corp was positive.

In retrospect Paul McGregor should have been sacked after the 0-4 start coming straight off the 15th place finish in 2019. We can only hope that in the future underperforming coaches are kept on a much shorter leash.

The Board did hedge their risk by only appointing Griffin for two years. It’s unknown what performance expectations Griffin has been given for his contract to be extended but you’d have to think it’s finals in 2021 and top four in 2022.

Some would say not before time, as the season wound down Dean Young took the opportunity to blood some of the highly rated juniors coming through. The electric Cody Ramsey was first, scoring two tries on debut against Canberra, then Max Feagai coming off the bench against Newcastle then Eddie Blacker and the most highly rated of them all Jayden Sullivan debuted in the Round 20 match up against Melbourne. Sullivan’s inclusion saw Corey Norman drop out of the 17, which once again wasn’t before time.

There was a lot to take out from the Round 20 win against Melbourne. Eddie Blacker is big enough to have his own post code, that was the first time I’d seen him play, he’ll definitely be a player to watch out for in 2021. Jayden Sullivan is the real deal he looked completely at home in first grade even though Melbourne put a number of shots on him.

It was so refreshing having a 6 and 7 who both ran the ball to the line. Cameron McInnes is definitely the best dummy half at the club and Max Feagai hits like a hammer in defence, he’ll be right at home at left centre in 2021.

Now with 2020 in the history books, we can look to 2021 with high expectations. But in reality what should we expect?

The Jack de Belin trial still hasn’t taken place and while the club has come to terms with de Belin for 2021 there’s absolutely no guarantee he’ll be available. If de Belin is available in 2021 he’d return as the cornerstone of the pack. 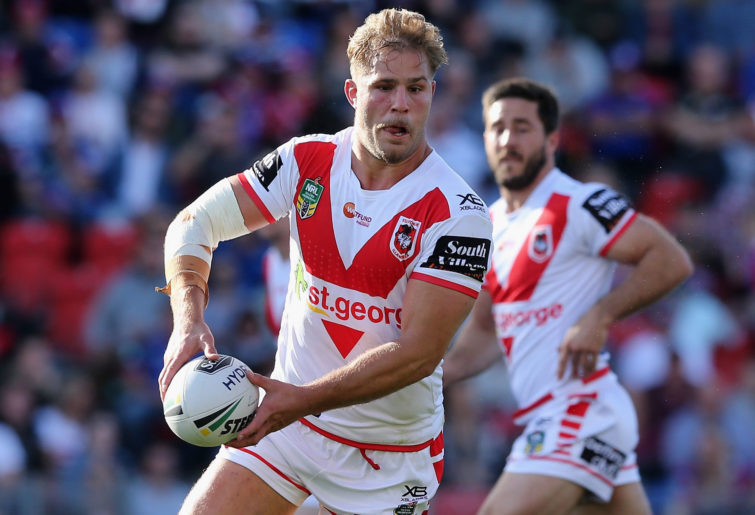 After three years at the Dragons, Ben Hunt remains an enigma. In 2020 Ben played seven games at halfback and the Dragons lost all seven games. His catch and pass style of play doesn’t challenge the defensive line and the emergence of Adam Clune has added some pressure – and I don’t think he dealt with it very well.

Hunt is an effective dummy half but that means playing Cam McInnes out of position at lock. As we’ve seen these past weeks, McInnes at lock leaves the forward pack undersized up the middle.

The Melbourne game demonstrated McInnes returning to 9 and Tariq Sims back in the team playing lock fixed our central defence. Where Griffin plays Ben Hunt in 2021 and what production he can get out of him will be one of the top story lines during the off-season. At $1M a year in salary, Ben Hunt will definitely be in the team somewhere.

A lot more production is required from Tariq and Korbin Sims in 2021. The brothers are meant to be the enforcers of the pack but both players have had a dreadful runs with injury. Keeping both Tariq and Korbin on the field will be very helpful for Griffin.

Norman remains the most controversial player at the Dragons. On huge money and capable of sublime skill but equally capable of fundamental errors and brain fades, 2021 is the final year of his contract with the Dragons.

Most Dragons fans will be happy to see the back of him. The choice of persisting with Norman at 6 or investing in Jayden Sullivan will be a critical decision for Griffin. After suffering through two years of Norman playing 6, the pressure will be on from fans to start with Sullivan and keep Norman as a backup.

The young and talented backline, led by the 21 year old Zac Lomax, needs to be developed and shown patience at times. As a fan I’d love to see the kids encouraged to play what’s in front of them and move the ball around.

Potentially players like Jayden Sullivan, Cody Ramsey, Zac Lomax Max and Matt Feagai could be ripping up Netstrada Kogarah Jubilee and Win Stadium for the next decade.

Like any new incoming coach you’d expect to see some movement in the playing squad. We’ve probably already seen this with the recent decisions to let Tristan Sailor and Jacob Host go. These follow on from James Graham, Tyson Frizell, Euan Aitken, Tim Lafai etc all not returning in 2021 and Kaide Ellis still unsigned.

According to media reports the Dragons have $1.5M available to spend. Impossible to mind read what Griffin is thinking particularly because he’s been out of the media since his appointment.

But you’d have to think there’s a lot of work being done behind the scenes to assemble the squad Griffin wants. Griffin only has two years to get results so he can’t afford 2021 to be a throw away year.

2020 didn’t have to be a disaster, rather than starting 0-4 all those games were winnable, a 4-0 start would have seen us in the eight. But in the end if we needed 2019 and 2020 to be disasters to force the board to sack McGregor then maybe it’s all for the best in the long run.

Also Corey Norman was dropped twice during this season once for Sailor and once for Sullivan. So this proves it is possible to drop a $850K player for the good of the team – something I hope Griffin takes into 2021.

My personal opinion is that the Dragons have the basics in place to be a top eight side. Some intelligent recruitment and more devoted development of juniors will get us moving up the table. In the 14 weeks McGregor was coach this year, he debuted only one player. Just not good enough.

I’ve intentionally not entered into speculation about recruitment targets I’d rather put my faith in Griffin and let the facts play out. Griffin is meeting with the playing group this Wednesday so perhaps we’ll find out more detail then.

In closing the one thing that I think is critical is that the Dragons get off to a strong start to 2021 This will build confidence and reduce some pressure on the coach. Starting 6 from 7 and winning the Anzac Day game will set the season up.

A slow start will leave us to win a lot of games at the back end of the season and I’m not sure we’d make it.

I know the critics will say that Melbourne only fielded a reserve grade side and the Dragons win was meaningless. But the history books will show a Dragons victory and if it was a glimpse into the future then I liked what I saw.