However, when the race ended we learnt quite a few things across the whole Formula One grid.

Lewis Hamilton and the team are the only ones who can beat themselves
Hamilton has been dominant this season and currently has 44 points over the next-best driver, Valtteri Bottas, in the title standings. However, the common theme among the races he hasn’t been able to win is that they’ve come down to driver and team error.

So far this season Hamilton has won every race except for the Austrian, 70th Anniversary, Italian and Russian grands prix.

In three of those four races, Hamilton incurred time penalties for a variety of reasons. Meanwhile, at the 70th Anniversary GP in Silverstone, he and his teammate suffered mightily from tyre issues. Max Verstappen was the beneficiary.

Hamilton was also quite fortunate to hold onto the British Grand Prix win a week prior, completing much of the last lap on three wheels.

All things being equal, there hasn’t been a way to stop Lewis Hamilton. All the other drivers will need to hope he slips up or the Mercedes car underperforms to have a chance at a race win.

Daniel Ricciardo is still a world championship-calibre driver
Ricciardo has always been touted as one of the top Formula One drivers. He’s currently sitting sixth in the drivers championship and is only two points behind from Lando Norris in fourth.

After a disappointing 2019 Ricciardo seems to finally be on top of the Renault car. The team, to their credit, have improved their performance throughout the season. They have great power and straight-line speed, and the Australian has been benefitting and remained consistent.

In five of the last seven races Ricciardo has finished sixth or higher, helping to bring Renault back into the midfield race for the constructors championship. He also had many opportunities for podiums, though unfortunately couldn’t get there when it counted.

Dating back to his days with Red Bull, Formula One fans know what he’s capable of. Hopefully for Aussie fans he’ll be able to blossom further next year at McLaren. He has shown this season he deserves to be in the same class as Hamilton, Bottas and Verstappen.

McLaren have fallen off quite a bit
The orange machines have slowed down in their points accumulation after a fast start to the season. Lando Norris has been carrying the burden for McLaren, but Carlos Sainz has had a more frustrating time recently.

In the last seven races Sainz has finished in the points twice, most notably when he came second in the dramatic Italian Grand Prix. The other races saw him involved in incidents, including two failures to finish and a failure to start in Belgium.

At one stage they looked like a solid choice to pencil in as the third-best team in F1, especially with Racing Point’s penalty. Now they have both Racing Point and Renault chasing them, the difference standing at only seven points.

Despite qualifying in Q3 multiple times, recent races have shown both Norris and Sainz getting off to poor starts and having to fight their way back into the race to secure points. They’ll be hoping Sainz can help Norris going forward by completing races and competing for points.

Sergio Perez showcases his quality without car upgrades
Sergio Perez has had an eventful season thus far. He had to take two weeks off and miss two races after contracting COVID-19. Then Racing Point announced that they will part ways with him to allow Sebastian Vettel to join the team in 2021. Compounding matters is that Racing Point have invested their car upgrades into Lance Stroll for the past two races owing to his higher place in the drivers standings.

Throughout all of this Perez had remained under the radar, and he is now only one point behind Stroll in the championship.

Since Perez’s return from COVID-19 he has outqualified Stroll in every race so far. He is certainly boosting his value and making himself one of the drivers in demand for 2021. With news Haas is potentially looking to bring in the Mexican, whoever he joins will receive a quality driver.

Something is wrong with Sebastian Vettel
It’s been no secret the breakup between Ferrari and four-time world champion Vettel has been ugly. Watching the German perform this season has been depressing. While the car being slow has done Vettel no favours, he hasn’t really been impactful and for the most part seems to be making up the numbers.

His best finish this season has been sixth at the Hungarian GP, but for the most part he’s either collected one point or nothing at all.

With plenty of drama and tension between the driver and team, Vettel fans can only hope for a resurgence at Aston Martin next season.

Charles Leclerc has maximised the performance of the Ferrari as he has still managed to grab two podium finishes. But it seems Vettel has checked out and is desperately looking forward to a fresh start in 2021.

After years of heartache, Shane van Gisbergen has finally taken out the Bathurst 1000, narrowly edging Cameron Waters to win a thrilling race and claim the Peter Brock Trophy for 2020. The New Zealander had come agonisingly close to the title in finishing second in both 2016 and 2019, but held his nerve in a […]

It was another race for the ages, with Shane van Gisbergen and Garth Tander delivering one last victory for Holden in the legendary marque’s final Bathurst 1000 as a manufacturer in the Supercars championship. From Holden’s 34th victory to another Holden’s turmoil and the setting of a new qualifying lap record, there are the talking […]

He’s usually one of the most reliable V8 drivers but even Jamie Whincup makes mistakes when it comes to Mount Panorama. 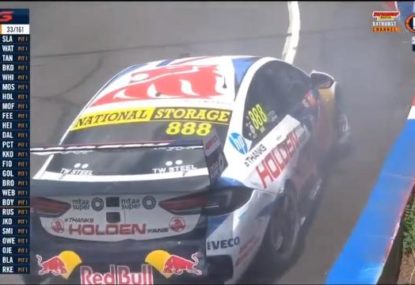 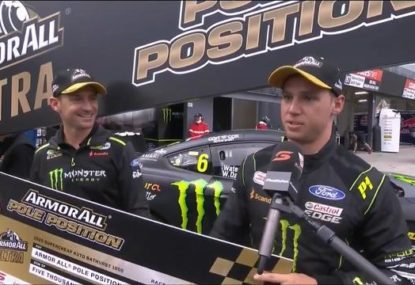 Scott McLaughlin's flying lap in practice halted by the wall

Even in a practice session, Scott McLaughlin was going flat out to test his Ford. While on a flying lap in practice 5 he clipped the wall at Forest Elbow before Conrod Straight. 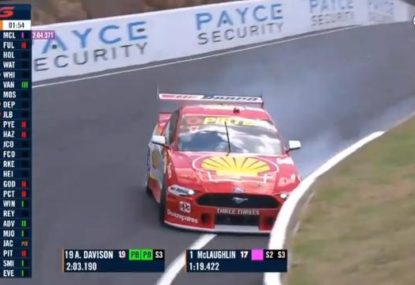 Scott McLaughlin's flying lap in practice halted by the wall