Representative games can be found in part three of this series.

1995 – with whispers about a rebel league growing louder, the ARL demanded all 20 clubs sign a document pledging their allegiance to their competition under the threat of expulsion.

Brisbane failed to sign by the deadline, the morning of their Tooheys Challenge pre-season opener. Given a reprieve, the Broncos ended up winning the tournament in its final edition, its demise mostly down to teams not wanting to play up to five pre-season matches.

The Warriors missed the finals on for and against, the Reds only one win behind, the Crushers just outside the bottom four, and the Cowboys finished with the spoon.

Manly, Cronulla, Newcastle, St George, and Sydney City improved on their 1994 results, while North Sydney, Illawarra, and South Sydney fell down the ladder.

The regular season was played over 22 rounds, with all teams playing each other once in the last 19 rounds, with the first three rounds contested by four-team pools based on ladder position when the draw was created.

Some pools happened to be stronger than others, such as the Dragons, Sharks, Knights, and Reds grouping, but at least the groupings were intended to be of equal strength.

Three clubs won their first nine games, with Manly, who took the minor premiership ahead of Canberra thanks to for and against, extending their run to 15.

The Dragons, with the most difficult early-season draw, dragged themselves into the top eight for the first time in the penultimate round.

And had the Reds defeated the Dragons in their game, it would have been a five-way tie for the last two finals spots.

The finals system, adopted prior to the AFL’s usage, was almost identical to the current system of top four playing for a week off, and all other games being elimination, with two exceptions.

One was the use of neutral venues. Brisbane’s first game was at Suncorp Stadium despite finishing below their Canberra opponents, but that was predetermined as a venue. The second was the lack of crossover of the finals fixtures, meaning that after Brisbane lost that game to Canberra, had they defeated the Bulldogs in their next fixture, they would have played the Raiders again in week three.

With the fourth-placed Sharks also going out in straight sets, this anomaly was largely overlooked.

Although Channel Nine would sometimes show additional matches, their standard coverage was a delayed Friday night game and a one hour highlights package of Sunday’s match of the day. Nine’s regional affiliates would show their local club’s futures, generally on delay. The only guaranteed live match was on Saturday afternoons on the ABC.

The Super League signings commenced on the weekend of Round 4, overshadowing the season.

1996 – with an off-season dominated by court cases, culminating in a ban on Super League, the start of the regular season was postponed more than once as the rebel clubs and players explored their options. Ultimately, seven of the eight Super League sides forfeited their opening fixtures before returning the following round.

Those forfeitures, along with Origin selection reopened to all players, contributed to only three Super League teams making the finals, with only the Broncos in the top four.

Another factor was the wording of the Super League contracts. Salaries were guaranteed regardless of the choice of team for contracted players. Given that there was no Super League competition for its players, they were free to represent any club, including those aligned with the ARL.

ARL contracted players, however, were not permitted to play for rebel clubs.

The overachieving clubs were Manly, Norths, Sydney City, Western Suburbs, Sydney Tigers, and North Queensland. Conversely, Canberra, Newcastle, Sydney Bulldogs, Western Reds, and South Queensland fell down the ladder, and Parramatta would have expected to have finished higher than they managed, given their massive recruitment drive.

The draw was the same as 1995, only with the home-and-away fixtures reversed. The finals format was also repeated, but the week three rematch anomaly was removed. Again it didn’t matter because for the second straight season, the Broncos, along with the fourth-placed club, went out in straight sets.

As it turned out, again the winner of the sixth versus seventh playoff ended up facing minor premiers Manly in the grand final.

In the off-season, Super League won its court appeal and pressed forward with a separate competition.

Good memory: Monday night football was properly promoted and had a series of matches that ended up being cliffhangers.

1997 – both competitions ran full home-and-away seasons; the 12-team ARL continued with 22 rounds, and the ten-team Super League played 18. Their clubs ultimately played 24 regular season matches, however, due to the World Club Championship.

The group rounds of the World Club Championship, featured in part three of this series, were held in two three week blocks during the regular season. This, along with split rounds for representative fixtures, resulted in a stop-start Super League season.

In the ARL competition, Newcastle, Parramatta, Illawarra, and Gold Coast were the big improvers, but more was expected of Balmain, Western Suburbs, and St George.

Super League ran with the classic five-team finals system, while the ARL concocted a seven-team format. It sucked.

Two games were worse than meaningless, with both the winners and the losers of the Bears and Roosters, and the Sea Eagles and Knights facing elimination finals the following week. The winners’ opponents were undefeated teams, with the losers’ next challenge being against teams that lost in week one.

In fact, the grand final was guaranteed to involve one undefeated team, and one team that had already lost a game. This system, unsurprisingly, has not been seen since.

Incredibly, the most feasible option was the Nine Network. With the ARL retaining their Friday night and Saturday afternoon coverage, Super League, given its success at the end of 1996, requested their match of the round to be shown on Monday night. Nine, however, were insistent on their prior scheduling, delaying coverage until 9:30pm.

The ensuing tantrum that followed led to the ARL’s Friday night game being moved to the same time. Ratings, already at risk due to the split competitions, plummeted.

Peace was negotiated in the off-season, with the Reds being replaced by the Storm, and the Crushers and Mariners being axed by their respective governing bodies.

Good memory: Hazem el Masri, in his debut season, being allowed to represent Lebanon at the ARL World Sevens before returning to Canterbury to be the second-highest try-scorer in the Super League competition.

1998 – one of the key aspects of the peace deal was the reduction of clubs, with the new NRL competition to drop down to 16 teams in 1999, and then 14 from the year 2000 onwards. There was to be a maximum amount of Sydney clubs, and guaranteed acceptance of any clubs that merged to survive.

With a reduced salary cap, clubs were scrambling to maximise performances, revenue, and attendances, while trying to court prospective merger partners.

In a season blighted by performance-enhancing drug cases, three involving Newcastle players, Melbourne greatly exceeded expectations in their debut season, while St George and North Queensland improved on their 1997 efforts.

The finals, for the first time, comprised ten teams over five weeks with essentially two final five structures running simultaneously. Brisbane and Newcastle, who finished first and second, skipped week one, then lost in week two. Their conquerors, Parramatta and Sydney City, went straight into the grand final qualifiers in week four, which they both lost.

Channel Nine moved from Saturday to Sunday for their afternoon game, while regional coverage, with the notable exceptions of Adelaide and Melbourne, started to disappear with Foxtel and, for the time at least, Optus Vision establishing a greater presence.

With Illawarra and St George the only teams to enter into a joint venture, the two governing factions came to the compromise of withdrawing one team each for a 17-team competition in 1999.

Adelaide and Gold Coast were the sides to be sacrificed.

Good memory: after his club went winless for the first ten rounds, Adelaide’s Tony Iro decided the best way to protect a two-point lead against the Dragons with 30 seconds remaining was to run half the length of the field backwards to avoid handing over possession.

Bad memory: despite scoring two of the best team tries in the game’s history in their final match, the end of season Kangaroos side, coached for the first time by Wayne Bennett, left a bad taste in the mouth because they were effectively the Broncos All-Stars.

Allan Langer, who wasn’t even considered worthy of making the team for the mid-season Test, was named captain for the first time.

1999 – a draw with an odd number of teams necessitated byes every week, and in a season where results could potentially determine a club’s survival, it needed to be as balanced as possible. Unfortunately, this is rugby league we’re talking about.

Western Suburbs had their second and last bye in Round 6. They eventually finished with the wooden spoon and, had they not entered a joint venture with Balmain, would have been excluded from the 2000 season.

Penrith, who, as detailed in part one of this series, barely survived the cut, played the team coming off the bye in more than half of their matches. Inevitably, their finals hopes fell away in the second half of the season.

In a year where team performances fluctuated wildly, the big improvers were Cronulla, Parramatta, Penrith, Auckland, and South Sydney, with Newcastle, Brisbane, Canberra, Manly, and North Sydney below their standards from 1998.

1999 was the first season of the much-derided eight-team McIntyre finals system, where some teams’ fate was determined by results in other games. As it turned out, since Cronulla and Parramatta, the top two seeds, won their openers, the 4v5 and 3v6 games were rendered irrelevant. Ultimately, the 3v6 clash, between the Storm and the newly formed Dragons, was repeated in the grand final.

Balmain and Western Suburbs formed the second joint venture, and Manly and an insolvent North Sydney eventually followed, bringing the NRL down to 15 clubs. With only 14 spots available in the year 2000, South Sydney were the ones to miss out, a decision that led to public protests and an immediate legal appeal.

As it stood, the Roosters were the only foundation club to survive the war as an independent entity.

Good memory: the opening of the Olympic Stadium, with over 104,000 attending the doubleheader.

Bad memory: no extra time in State of Origin leading to Queensland engraving the trophy claiming to have won a series where they triumphed in one out of three games.

Next week: the “what if” questions. 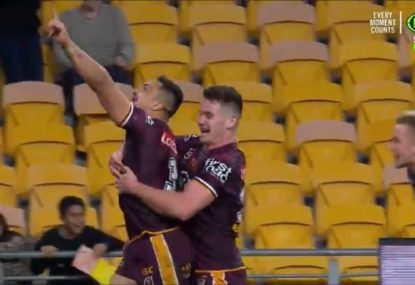