Richmond may not have finished the 2020 home-and-away season on top of the ladder but with the beginning of the finals series just one sleep away, they stand out from the pack as premiership favourites.

The Tigers finished the regular season a win and a half outside of the top two, but won their last six games in a row and have a better percentage than the second-placed Brisbane Lions.

In their matches against fellow top-four opposition this year they thoroughly dismantled both the Lions and Geelong, even though they went in as underdogs against the Cats. They were beaten by Port Adelaide – their most recent loss – but were without some key personnel.

The Tigers simply have a legitimacy that 2020’s other top-four sides don’t. They’ve won two premierships in the last three years, while the three remaining top sides have won only two finals between them in that time, both supplied by Geelong.

But this is not an unfamiliar state of affairs. Just two years ago Richmond were far stronger premiership favourites than they are now and yet they not only fell short of the premiership, they were stopped even from reaching the grand final by a preliminary loss to Collingwood.

So, which of this year’s seven other finalists has the best chance to topple the Tigers? And can that team – unlike Collingwood – then go on to win it all?

Brisbane have the first crack, on Friday night, and on their home turf they must surely be considered a chance.

Richmond have a dominant recent record against them, including a qualifying final win at this very venue last year, but that will no doubt have made Brisbane all the more hungry to taste victory, knowing that it just might be the last hurdle they need to jump to be a real flag threat.

The Lions have been helped, too, by the news that Tom Lynch will not play in the first week of finals, still recovering from a hamstring injury earlier in the year.

It’s unknown what will happen with Harris Andrews. Originally thought unlikely to return before the preliminary finals, recent talk suggests there is some optimism he could make an early comeback. Still, you’d consider it unlikely.

If Andrews is absent then at least Lynch’s unavailability will balance that situation out, though it still leaves Brisbane with the threat of Jack Riewoldt or Dustin Martin running wild, the latter kicking six goals against them in last year’s qualifying final.

Overall, a young Brisbane side has done well to finish in the top four for a second year running, but these next few weeks – where they will be desperate to improve on last year’s straight-sets exit – will tell us whether they’ve really improved or simply trod water.

If Chris Fagan’s men can’t halt some of Richmond’s momentum then it will be up to one of Port Adelaide, Geelong, or more unlikely West Coast or Collingwood, to get the job done in a preliminary final. Each would have a level of belief that they could be the team to slay the Tigers.

Port are the underrated threat heading into this year’s finals series. It feels weird to say it about a team who has finished on the top of the ladder, but they are 2020’s dark horse.

Geelong looked mighty just a short time ago but went to water against the Tigers in the home-and-away season and then barely flailed over the line to secure top four against Sydney. How much momentum have they lost? It’s so easy to see them falling short in finals once again.

Brisbane are still in the adolescent voice-cracking stage of becoming a premiership contender, and while they could hit maturity at any moment, you’d be brave to bet on that moment being right now.

West Coast and most likely Collingwood are too hit by injury, the Western Bulldogs too flakey, and St Kilda lack the star power (though, they do deserve a tip of the cap as the only other side in the finals to have beaten Richmond this year).

Port, instead, have done just about everything you could ask in 2020. They’ve finished every round on top of the ladder and lost only three times this year: to Brisbane, St Kilda and most recently Geelong. 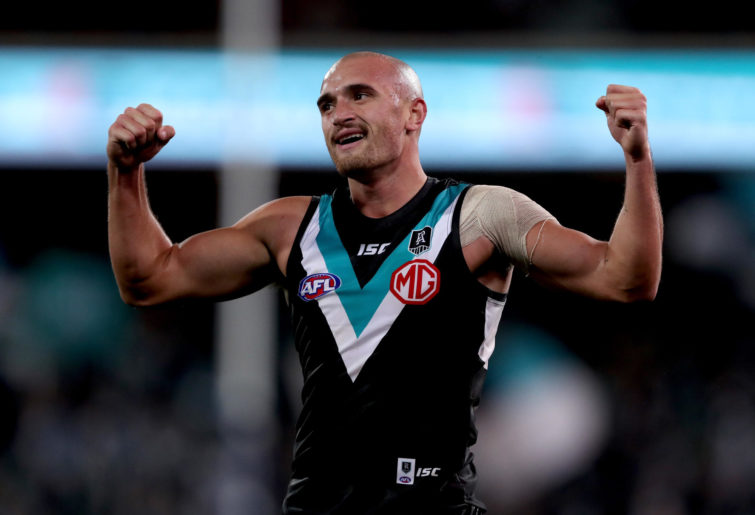 That poor performance against the Cats was where many of us lost faith in them, but it’s worth noting that they had just a four-day break ahead of that game, a situation which has seen many teams struggle this year. They won’t have the same issue this time – and they’ve got home ground advantage, too.

My head says Richmond are clear premiership favourites. They have star power, they have system, they have legitimacy. Finishing third, they can think of themselves as hunter rather than hunted, which they love to do. There isn’t a side in the league I’d back confidently in a do-or-die final against them.

But my gut says somewhere in this pack of seven other finalists is a team talented and daring enough to topple the Tigers in October – and my best guess as to who that might be is Port Adelaide.

Is my gut right, or am I just hungry? Only time will tell.