While the pandemic has delayed the final element of the above hypothesis and those of us living in Melbourne are limited in how much of the great outdoors we can actually experience, one thing has remained pandemic-proof: for the 16th consecutive year Essendon have meekly faded into the background of football consciousness, unable to mount any sort of challenge to the throne.

A team so steeped in history, glory and fame is now a continual punchline, with the only semblance of consistency coming via their late-season fadeouts and lack of finals success, unable to shake festering aroma of mediocrity that hangs over Tullamarine like a dark cloud.

There’ll be no commemorative DVD of the year spent in the hub. Aside from the rapid improvement of Jordan Ridley and the blooding of Sam Draper, there will be very little to look back on from the 2020 season.

A promising 5-2 start, including one loss by a single point against old enemy Carlton, had fans optimistic that in a year like no other and with a young squad better suited to playing on short turnarounds during the footy frenzy than some of their older counterparts this would be the year that broke the finals win hoodoo.

Can the Bombers improve in 2020? (Paul Kane/Getty Images)

From that juncture onwards the Bombers won just one game – against fellow stragglers Hawthorn, who made them look like complete amateurs for a half – and held on by the skin of their teeth for a draw against the Suns to finish the year 6-10-1, with the third-worst percentage in the league (79.2) behind Adelaide and North Melbourne, who finished 18th and 17th respectively.

Though this is not new territory for fans of the red and black and is consistent with recent history, it was the manner in which the team folded that was most galling and offers very little cause for optimism heading into 2021.

A game style hell-bent on handballing out of trouble often did the opposite. When you consider their inability to win the ball at the contest – ranked 17th for contested possessions per game – and that the Bombers finished 11th for inside 50s per game it becomes clear that many of these possessions were empty, going backwards and sideways without conviction.

In the final ten games of the home-and-away season Essendon averaged a miserly 50.2 points per game from 14.2 shots on goal. That’s asking a lot of your defence and midfielders to keep you in the contest who were unable to weather the storm.

Going the other way, Essendon conceded 750 points from 200 shots on goal. This resulted in a percentage of 66.9 on 71 per cent of shots on goal as their opponents across that period.

That is, for every seven shots on goal Essendon created in this stretch of the season they conceded ten.

For context, across the same portion of the year, albiet from one fewer match, North Melbourne were 1-8 with a percentage of 65.5, while Adelaide managed to get three wins on the board with a superior scoring percentage of 68.8.

They were out of most games by halftime. As the level of opposition increased as the season continued – six of their final ten opponents qualified for finals action – they were always going to be punching above their weight in order to compete, not helped by their ability to make fast starts is akin to Chautauqua jumping from a barrier.

Despite playing with their season on the line, the final ten games saw an average of 8.5 points per first quarter. Seven of their final ten games saw them trailing at quarter-time, including their only win of that period, against Hawthorn, who were 36 points to the good at the main break.

It is important to note that they were ravaged by injuries to key players throughout the season. However, to acknowledge that fact is not an exercise in excusing pitiful performances from a team that enters every season with such high expectations.

Past players, including Dean Wallis and Matthew Lloyd, have been outspoken recently about the “lifeless environment” around the club, and you don’t need Sherlock Holmes to understand why.

The coaching handover has ended messily and has put Ben Rutten in an awful, awful position to assume the reins. As Gerard Whateley put it on Fox Footy’s AFL 360, the club has “squandered the honeymoon period”.

Uncertainty remains over the futures of key players Joe Daniher and Adam Saad, while speculation over Orazio Fantasia’s commitment at the club continues to be a talking point. We’ve heard murmurs of disappointment over the handling of senior players, from Tom Bellchambers’s retirement to Cale Hooker’s omission late in the year and Michael Hurley being shifted between defence and attack.

Add to this the sad departure of Conor McKenna and the alarming number of significant players who have finished the year out of contract, including the aforementioned pair of Daniher and Saad, Ridley, Andrew McGrath, Kyle Langford and Marty Gleeson and it hardly appears to be an exuberant workplace.

Incidentally, of the top five in best and fairest voting, four – Ridley, McGrath, Langford, Saad – are all yet to be signed for next year.

All of this has coincided with a dramatic fall in membership numbers, down 20 per cent on 2019’s tally of 84,000. No doubt the pandemic has contributed to the fall in numbers, but who’s to say that a six-win regular season wouldn’t produce similar figures? A fan-base that has been through more in the last decade than any other club deserves better from the club that consistently fails to deliver.

Take for instance the return of Daniher. A fan-favourite who has been battling persistent injuries since 2018 and whose progress was largely kept under wraps, even compared to the development of a COVID vaccine at one point, was finally named to return for their Round 14 clash with Hawthorn.

And how was it announced? Via John Worsfold casually dropping it into his pre-matchday press conference at 9am on a Wednesday morning.

Woosha: Joe Daniher will come in to play Hawthorn tomorrow night. He’s worked incredibly hard and built up his loads over the past month to the point where he’s now ready to go.

Compare this to the work of the Collingwood media team marking the inclusion of Brayden Sier, who had played 18 games to that point and did not carry any sort of weight at the club like Daniher name at Essendon, and it takes the jam right out of the Daniher doughnut.

What should have been a celebrated occasion and a chance to generate some excitement and buzz around the club was wasted away with little fanfare whatsoever.

Obviously, this has absolutely zero correlation with on-field performance, but at a time, when smiles on faces are at a premium in everyday life, a little more enthusiasm would have been appreciated by all those looking for a bright spark during isolation in Victoria.

As Rutten takes off his coaching L-plates he has a few key questions to answer.

The first relates to the game style.

As mentioned earlier, their commitment to the Richmond-inspired handball game was a failure. It made them unable to not only score but simply create scoring opportunities and left them incredibly vulnerable going the other way, with the unstructured chaos leaving the backline unable to set up behind the ball.

Worsfold continually preached that this game plan would take time to learn, particularly with the restrictions on the ability to train as a group this year, and that fans need to be patient.

“No one team has any more right to be successful quicker than any other team just because they’re a big-name club. You’ve got to knuckle down and commit to doing the work.

“Good clubs will do that and come out of it with success.”

The outgoing coach has made every attempt to set the tone, but with his hands now exclusively behind the wheel, Rutten’s patience as a first-time senior coach will be something to watch. 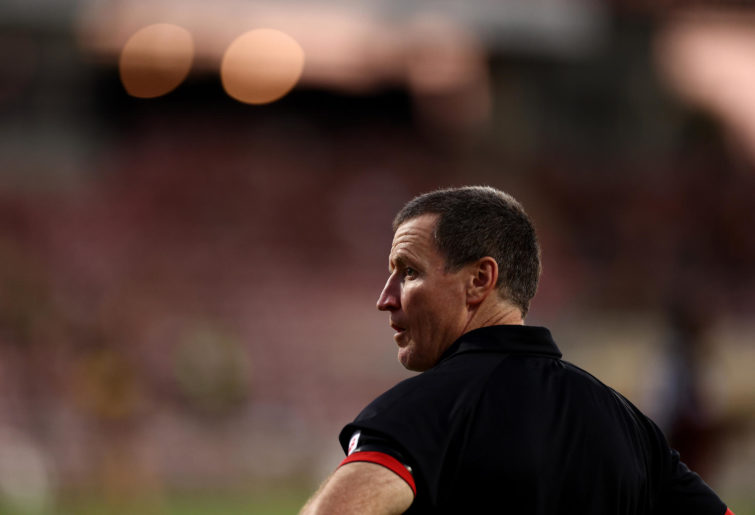 The second is admittedly more of a whole-club question and relates to the playing list.

The 2020 season showed the club is so far away from being in contention for their 17th premiership.

As a result of finishing last in 2016, 15th in 2015 and having two selections in the top 20 in 2014, they were able to draft a swag of quality high-end talent including McGrath, Ridley, Langford, Darcy Parish, Jayden Laverde and Aaron Francis.

Via shrewd trading they were able to add established players entering their prime over the off-seasons of 2017-18 in Saad, Jake Stringer, Dylan Shiel and Devon Smith.

Aggressively trading current and future first and second-round picks – six total selections across four trades – for established talent would suggest a club sees itself on the brink of contention and not wallowing away in 13th following three consecutive years of 12-10 win-loss records.

In 2020 their hands are tied to a degree, unable to trade their current first-round selection unless they obtain another via trade or free agency compensation according to the AFL’s future pick trading rules.

With Hooker being overlooked by Rutten in the final two games of the season and Hurley’s magnet thrown around in the final few weeks, there are serious questions around whether these two stalwarts have played their last games in the red and black.

Parting ways with them may be a catalyst to the beginning of a proper rebuild.

Incoming president Paul Brasher has made his intentions clear, telling members that he “hates to hear” accusations of the club being labelled as “passive”.

He also told Gerard Whateley on SEN on Wednesday that an expectation of being contenders in the next two-to-three-year period is “realistic”.

Alastair Clarkson famously set Hawthorn on course for their latest successful era and restored the club to their brutal, uncompromising nature early in his tenure by showing a number of senior players the door, including Nick Holland, Angelo Lekkas and Nathan Thompson, in order to make way for the likes of Jarryd Roughead Lance Franklin.

A move like this from Essendon would be drastic, but if the club is aligned to Brasher’s vision of the current trajectory, it would be the right decision to thank those older players for their service.

Essendon have been a nothing club for far too long. They don’t command the respect of opponents and their recent history is as flattering as that of the Gold Coast Suns. To convince themselves that things will come good because they are a proud club with a rich history would be moronic and ultimately demoralising for their loyal and desperate fan-base.

Attitudes and beliefs within the club need changing, and changing fast, both on and off the field.

Ignore this, and that daunting figure of 5870 days and counting won’t be going anywhere.