The versatility of the modern NBA centre

The 2019-20 NBA season has seen the transition of LeBron James from small forward to point guard for the Los Angeles Lakers.

Despite an increase in assist figures to a league-leading 10.2 per game, the eye test would tell us that James is the same facilitator he has always been.

Along with this continues the NBA’s path towards position-less basketball. Most notably, this transition is making the traditional centre position increasingly redundant. That is not to say the centre position is a thing of the past, rather the skillset to fulfil this role has bled into the power forward/small forward roles.

Some things never change, as post moves remain a necessity in dominating in the paint. Indiana’s Myles Turner is evidence of this – he’s seemingly built to be an elite centre given his physique and ability to run in transition. Yet his lack of post moves has stunted his offensive development, only marginally improving from 10.3 points per game in his 2015-16 rookie season to 12.1 points per game now. Counter this with the likes of Nikola Jokic – with few of the physical attributes Turner possesses, he still managing an elite 1.06 points per post-up possession this season and leading his team to the western conference finals in the process.

Another constant is the key element rim protection plays in a centre’s value. It is perhaps the only position on the floor where defence is more important than offence. A good offence/bad defence centre is borderline unplayable in a play-off series. Opposition can switch onto them regularly and abuse this match-up to reliably score in the restricted area.

This is why the Boston Celtics run Daniel Theis out as their starting centre over Enes Kanter. Despite being more offensively talented, Kanter’s inability to protect the paint means he is unplayable against starting line-up-calibre frontcourts.

The inverse is still a net positive, as exemplified by Andre Roberson’s immediate impact in his return to the Oklahoma City line-up in the Orlando bubble. In spite of his lack of a serviceable jump shot, there will always be minutes for him available in OKC as he is consistently tasked with guarding the opposition’s most talented offensive player.

Of course being good on one of the floor is less than ideal in either scenario, and this is where the contemporary NBA changes come into play. The game is continually being played at a faster pace and the centre has to be able to keep up with this full-court play. The Minnesota Timberwolves led the league in pace this season with 108.1 possession per game; just ten years ago in the 2009-10 season the Golden State Warriors held this claim with just 103.5 possessions per game.

By way of this, the centre must be able to run in transition and play a key role in the fast break. This has resulted in the advent of ‘small ball’ – playing a traditional power forward-type at centre to create a mismatch with the opposition’s centre that deems the opposition unable to play at the same pace for a full 48 minutes. This was heralded by the Golden State Warriors playing Draymond Green at centre, culminating in the Houston Rockets playing 196-centimetre PJ Tucker in this position.

Along with this ability to keep up pace, a jump shot is a requirement. In stark contrast to the pre-2010s NBA landscape, drafting a centre comes with a necessity for a functional jump shot. Although not the best centre in the league, Minnesota’s Karl Anthony Towns would be the easiest to seamlessly integrate into any offence. This comes as a direct result of his shooting ability – he is the best shooting centre in the league, hitting 41.2 per cent of his threes on as high as 7.9 attempts per game in 2020.

The value of this comes not only through these field goals but by extension the spreading of the defence. With all players on the floor able to shoot from at least mid-range, the defence cannot stick to the paint as steadfastly without giving up open shots from reliable shooters. This gives the guards more room to drive as well as punishing oppositions for playing zone defence for prolonged periods.

This may swing the other way eventually, as traditional centres are in short supply at an NBA level. This is largely on account of front offices not wanting to draft this way as the current game depends on pace and shooting. As this style of play takes over, however, having a traditional big could prove a mismatch as the versatility of centres now spreads talent thinner into a jack-of-all-trades sort of role.

With a specialty in the post and rebounding the ball, an elite traditional centre may exploit defences and demands double teams every time they touch the ball. Joel Embiid is the closest example the league has of this currently – an elite big man resembling the ‘centre of old’. For now, though, such specialised skillsets are not valued as highly as versatile frontcourt players. This is exhibited in only one centre – New Orleans’ Jaxson Hayes – being selected with a lottery pick in the most recent draft.

Ultimately, the dominance of Anthony Davis in this current finals series between his Lakers and the Miami Heat is the archetype of the perfect modern NBA centre. He represents the versatility of the modern NBA centre on both ends of the court. His physicality and variety of post moves allow him to dominate in the paint. His offensive game is rounded out shooting 50 per cent on his mid-range shot attempts in the play-offs thus far as well as being a serviceable three-point threat at 33 per cent on the season. 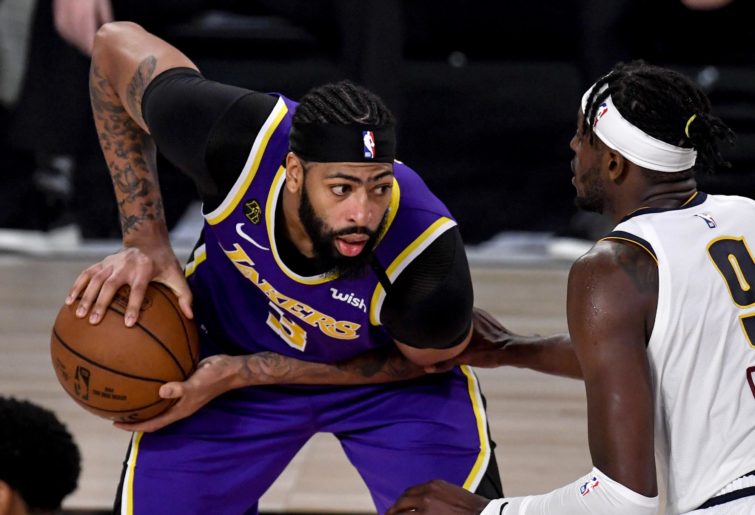 On defence, his rim protection deters guards from driving while he’s on the floor. What makes him unique on this end, however, is his perimeter defence, as his footwork and lateral quickness allow him to stay in front of his coverage.

Although unavailable in the finals due to injury, Miami’s Bam Adebayo possesses many of these same skills. His offensive repertoire is not strictly limited to the paint, as he manages just shy of 41 per cent from the range of 10 to 16 feet. This is hardly elite, but it’s more than enough to demand defensive attention.

Meanwhile, his selection to the 2019-20 NBA all-defensive second team comes on the back of his rim protection (a career-high 1.5 blocks per game this season) as well as his quick hands all over the court (1.5 steals per game).

It is no coincidence that two versatile centres have ended up on the NBA’s biggest stage as keystones of their respective sides. This versatility around the floor is not something even the greatest centres of the past had, but it is a necessity in the modern NBA.