What it takes to have the heart of a Warrior

Everyone loves an underdog, and that sentiment cannot be expressed stronger than the displays of the proud and passionate New Zealand Warriors club in 2020.

Unquestionably dealt the worst hand for the COVID-19-affected NRL season, the resilience and effort demonstrated by their club on and off the field this season has been absolutely remarkable.

Not taking anything away from Melbourne Storm or the other NRL clubs that have had to deal with pandemic-related interruptions, but the Warriors faced circumstances like no other.

All-in from start to finish, this was their journey.

On 11 March, a day before the kick-off of the NRL season between Parramatta and Canterbury, the World Health Organisation officially declared COVID-19 a pandemic.

That round the Warriors played the Knights in Newcastle, and at that time their home country of New Zealand enforced travel restrictions requiring all arrivals to self-isolate for 14 days.

With the season already underway and with the knowledge that any return to New Zealand would likely result in their exclusion from this year’s competition, the club scuppered their scheduled Round 2 home-ground match in Auckland and moved bases to Kingscliff, New South Wales, where their ‘home’ game at Gold Coast’s Robina Stadium against Canberra was played behind closed doors.

Post-match saw their opposition commend the Warriors for their sacrifice and commitment to remaining in Australia to ensure their place in the NRL and uphold the integrity of the competition.

On 23 March the NRL made the unprecedented decision to suspend the competition. Speculation was rife that if the season weren’t cancelled, the game could be played in a handful of locations within Australia. Either way, Warriors officials were prepared for the likelihood that they would have to return to Australia indefinitely to continue participating in the NRL if it restarted, effectively forfeiting their home ground.

By 9 April, with staff and players already returned to New Zealand during the suspension, the club learnt of the competition restart on 28 May. They were given clearance to return to Australia on 3 May to train at their temporary base in Tamworth.

The club made a promise to commit themselves to the NRL season for the good of the game.

After a 17-day stay and still reeling from three significant injuries, including new signing Leeson Ah Mau being ruled out for the season, the Tamworth faithful were farewelled with an appreciation haka before the club made the move to their ‘temporary-permanent’ home base in Central Coast for what seemed to be for the remainder of the season.

During a time when people in society were fighting for toilet paper at supermarkets, the Warriors were fighting to get a fit and firing side back on the field without a guarantee of returning home and without the physical support of their families.

All they had was each other.

Pundits made some bold predictions, more so some grim predicaments, for the club in 2020, mainly that the club will not win a single game during the season and that they will ultimately fold as a result of the pandemic. At a point where all the uncertainty surrounded the impact of the virus it was difficult to argue.

Yet in Round 3 we saw them defeat the Dragons 18-0, showcasing their steel in defence and subsequently serving as the catalyst for rugby league supporters to become keen admirers of the New Zealand Warriors.

The next two months of football for the club saw a roller-coaster of results on and off the field, recording a win-loss record of 2-5, with four of their losses being blowouts. Their Round 6 loss to South Sydney saw the club sack Stephen Kearney, to the surprise of many, with Todd Payten taking over as interim coach. Fans and experts reverted to the opinion that the Warriors, although brave, were just making up the numbers and would claim the wooden spoon.

Which brings us to Round 11.

The Warriors were faced with the mountainous task of defeating the red-hot two-time defending premiers Sydney Roosters, with the club set to lose David Fusitu’a, Ken Maumalo, Agnatius Paasi and King Vuniyayawa proceeding this match due to homesickness. Predictions of the biggest blowout score in NRL history were floated considering the Roosters were at full strength and the Warriors were coming off a 46-10 loss to Cronulla in a dismal outing.

But as history will have recorded, the Warriors gumption and bravery against the odds saw them lose the match 18-10, with the game in the balance until the 70th minute.

This was the point in their season that saw the Warriors flip the script, winning five of their final nine games, losing to top-eight sides Panthers, Eels, Sharks and Raiders by 12 points or less, all despite the fact they lost their primary playmaker Blake Green to the Knights mid-season, lost players to homesickness and injury and had to utilise fringe first-grade loan players from clubs that were willing to provide them. 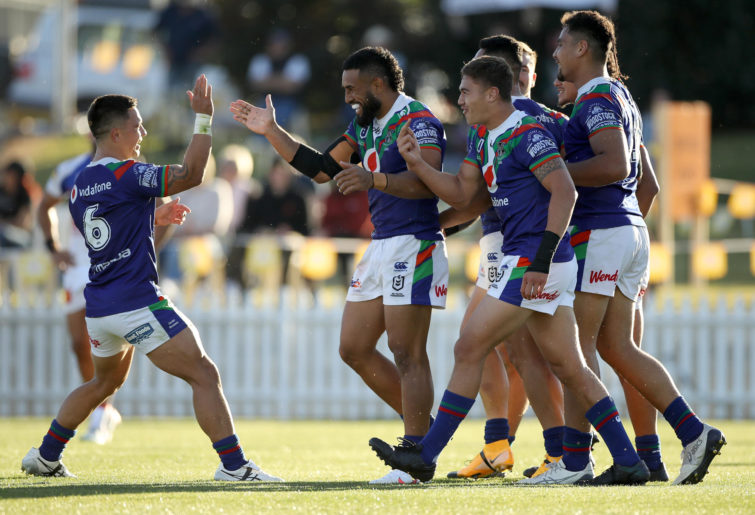 Despite all these factors compounding for the Warriors club, it never seemed to weary them on the field, and their boys always turned up and showed courage and grit no matter the opposition.

Perhaps their shift to a winning culture can be summed up by their inspirational captain, Roger Tuivasa-Sheck, who after sustaining a season-ending injury in the penultimate round refused to go home, stating that he wanted to see out the remainder of the season with his teammates.

Here is a leader who for the past five months had been the only player unable to have his wife and newborn travel across the Tasman, suffering from injury, with an immediate flight home dangled in front of him but makes the decision to stay with the squad – and what a decision that was after he was able to experience their sign-off to their toughest season to date with a 40-28 win over Manly.

It just goes to show that he was surrounded by family all along – his brothers.

Reaching the end of the match of the final round, where the team performed a haka for the retiring Adam Blair, we witnessed tears shed by players, staff and even their CEO with the season having come to a conclusion. This can be narrowed down to how evidently strong the bonds they built between each other really were, spending every single day together for such a long period of time in tough circumstances. They decided to make the most of it rather than do the opposite, which is incredible in itself.

The social media channels of nearly every other NRL club posted long thankyous to the Warriors for the countless sacrifices their club made to ensure players, fans, stakeholders and the like were able to achieve a viable NRL competition for the 2020 season.

Needless to say, no travel bubble was able to be established and the Warriors remained in Australia from 3 May until late September, when the staff and players finally got to return home.

Looking forward to their 2021 campaign, with a new head coach in Nathan Brown and some quality signings in Euan Aitken, Kane Evans, Addin Fonua-Blake and Ben Murdoch-Masila as well as their formidable financial position off the field, the Warriors have undoubtedly reset their culture this past season and have placed themselves in great stead for the future.

Amid the recent announcement and confirmation of a New Zealand-Australia travel bubble, which will allow quarantine-free travel when travelling between these nations, the NRL should handsomely repay the faith of the Warriors for their wholehearted commitment in 2020 by allowing the club to play their entire 2021 season in New Zealand, with only a handful of games in Tamworth and Central Coast as tribute to their hospitality in welcoming the Warriors during the peak of the pandemic in Australia. It would be the least they could do if restrictions allow them.

Nevertheless, the Warriors were an outstanding outfit this year. Professional on and off the field, they endured factors like no other. Club staff and players could have justifiably taken the easy option and not participated in 2020, saving themselves five months of separation from their country, homes, families and usual way of life.

Instead the New Zealand Warriors went above and beyond to do the opposite and became every rugby league supporter’s second-favourite team, deservedly admired and making their diehard supporters proud.

For this journey we say thank you. Your club truly epitomised what it takes to have the heart of a Warrior.