No one is going to admit it, but they were wrong. We were all wrong about Jimmy Butler. He has potentially been one of the most scrutinised players in recent years.

Butler has had stints with the Chicago Bulls, Minnesota Timberwolves and Philadelphia 76ers before joining the Miami Heat.

However, no team has seemed to find success with him. Everyone blamed Butler, called him “arrogant” or stating that he was a “problem.” But, if leading the fifth seeded Miami Heat to the NBA Finals was not enough to prove everyone wrong, the result of Game 3 of the NBA Finals has put a hand over the mouth of all the naysayers.

Butler led the Miami Heat to an 11-point victory over the Los Angeles Lakers in Game 3 of the NBA Finals. His performance was what led a depleted Heat team that is missing both Bam Adebayo and Goran Dragic to injury. Butler recorded 40 points, 11 rebounds and 13 assists, making him just the third player in NBA history to record a 40-point triple double in NBA Finals history.

What made this historic performance stand out to me was a moment in recent history that mirrors this scenario, albeit in much different circumstances. I am talking about the infamous Minnesota Timberwolves practice where Jimmy Butler returned to the facility after requesting a trade.

What is more interesting is that, even after that scrimmage, Butler was criticised due to calling out Towns and Wiggins, per Chris Haynes of Yahoo Sports. Butler called the pair out, yelling out “they ain’t s–t” and “they soft.”

Butler later made comments about the way he called out his teammates, in an interview with ESPN’s Rachel Nichols. In the interview he stated, “A lot of it is true. I haven’t played basketball in so long. I’m so passionate. I don’t do it for any reason but to compete. All my emotion came out in one time. Was it the right way? No! But I can’t control that when I’m out there competing. That’s raw me, me at my finest, me at my purest. Inside the lines.”

While at the time, people criticised him, naming him a problem player, Butler’s emotion stemmed from past attempts where he had criticised the work ethic of the young pair.

However, the team sided with its young stars, even though their overall win/loss ratio with that star duo was horrendous compared to when Butler played with the team. Butler’s issues with former Sixers coach Brett Brown’s decision making at times also led to the Sixers shunning him. 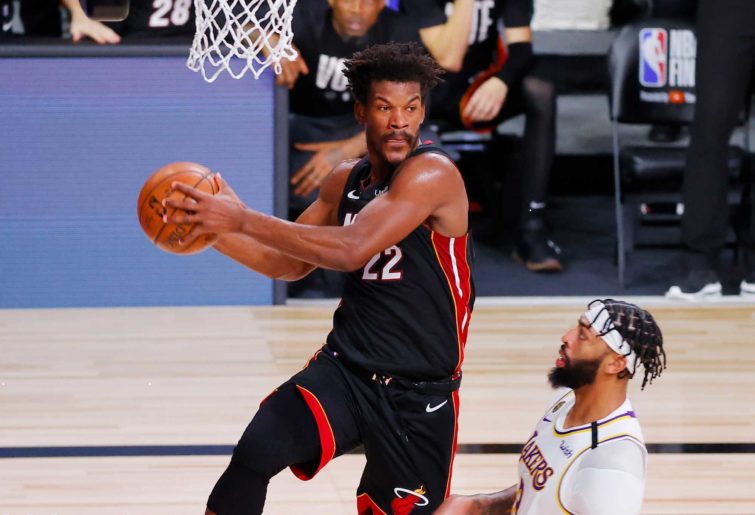 It seems that Butler’s attitude was not welcome in any team, and that he was a player that no team wanted to deal with, due to the negative effects he could have on the locker room and team chemistry. However, it seems that Butler was not the problem after finding his rightful home with the Miami Heat.

The Timberwolves and Sixers both could not handle Butler’s “heart” and raw emotion, which led him to signing with the Heat during the 2019 offseason.

Looking at where the Heat stand now, competing in the NBA Finals after missing the playoffs entirely last year, it seems both Butler and the Heat have found their perfect match. The rest of his teammates have had nothing but praise for Butler since he joined the Heat.

“He really started to show me how to be a pro,” Heat rookie Tyler Herro said, per Nick Friedell via ESPN. “Just the way he goes about it: his approach, how dedicated in the time he puts in. You really do see that it’s not fake.”

Bam Adebayo and Andre Iguodala heard the noise about Butler during his stints with other teams, particularly the Minnesota Timberwolves and have debunked any rumours about Butler being a locker room problem.

“He’s way different than some of the media portrayed him to be. He’s not a cancer,” Adebayo said. “As you can see, we’re winning. He’s one of the leaders on this team, and that’s what we need from him. He’s going to keep doing it. I’m going to stay on him to keep doing it.”

“I think he upped the level of play for the guys on the Bulls.” Iguodala stated. “I think [the major issue] was only at one stop, really, [in Minnesota], and we see what’s happening with that ship.”

Butler’s Miami teammates did not believe the rumours and media about Butler’s problematic reputation. Instead, they all accepted him and believe that he makes them better with his leadership, honesty and level of commitment to the game. It has seen the Miami Heat overachieve this season, as they continue their battle with the Los Angeles Lakers for the NBA championship.

No matter if the Heat win or lose this Finals series, it seems both Butler and the Heat have found a match with each other, and that the other teams Butler played for simply could not handle the level of competitiveness he brings to the game.

Butler was never the problem, he just had not found his fit yet. Now that he has, the rest of the league has been put on notice.