Season 2020-21 marks the centenary of women’s football in Australia, so it seems appropriate to look at five possible inductees who have contributed.

1. Joe O’Connor
Considered the Godfather of women’s football in NSW, O’Connor is the husband of 2001 inductee Pat O’Connor.

Although a solid footballer himself, his coaching and contribution to growing the women’s game should never be forgotten.

O’Connor coached Sydney Prague, St George and NSW women in the 1960s and ’70s. He was also the coach of the 1975 Australian XI team who played at the inaugural AFC Women’s Championships in Hong Kong, where they finished a respectable third.

O’Connor had a hand in developing the first official Matilda in Julie Dolan, who was with him at St George, NSW and the 1975 Australian XI.

2. Angela Iannotta
Hailing from Albury, Iannotta became the first Australian in history to score a goal at a World Cup when she netted against China in 1995. Although injury curtailed her career, she still managed 33 caps for Australia, appearing in two World Cups.

She narrowly missed out on selection at the 2000 Sydney Olympics.

Iannotta also became the first Australian to win an Italian top-flight title when she won the 1995 Scudetto with ACF Agliana in 1994-95. She also played domestically in Japan and Australia.

Her legendary strike in ’95 for the Matildas was a pivotal moment for Australian football but her achievements in Europe, Asia and for the national team throughout her career, despite injury, makes her an icon of the game.

3. Heather Garriock
Having played 130 games, which included being part of the 2003 OFC Women’s Championship and 2010 Asian Cup triumphs, Garriock will be in the Hall of Fame one day.

Successful on the domestic scene, Garriock won two W-League titles with Sydney FC, a WNSL championship with NSW Sapphires, the Swedish Damallsvenskan with LdB FC Malmo, the Svenska Supercupen, as well as a Danish Cup with Fortuna Hjorring.

The 2003 Dolan Medallist also has coached in the W-League.

The ‘Wildchild from Campbelltown’ is an inspiration to many and will undoubtedly one day be a successful administrator.

4. Jean Campbell
Many would scratch their head at this name. Who is she?

Campbell played in the first public women’s game on 24 September 1921 for North Brisbane against South Brisbane. This was somewhat of a representative game.

Despite only being 16 she captained North and was a stalwart in defence according to newspaper reports of the day. She even scored a penalty as North Brisbane won 2-0.

Campbell played a key role as an administrator too in Queensland women’s football.

While a lack of accurate records makes it hard to point out her key achievements, her contributions deserve to be recognised.

5. The 1975 Australian XI
While a number of individuals from the 1975 team – including Pat O’Connor, Julie Dolan, Trixie Tagg, Cindy Heydon and Connie Selby – have already been inducted in their own right, it would be appropriate for this pioneering team to finally be recognised.

The 1975 Australian XI was made up of players from NSW and after being sanctioned by the Australian Soccer Federation (the national governing body at the time), they played in the inaugural AFC Women’s Championships, where they came third.

This team has never officially been capped by Australia nor formally recognised by Australian footballing authorities. Over the years, the team has been unfairly mocked as being ‘just from NSW’, however they played in the first Asian Cup and represented our nation with great distinction.

This team is widely recognised as setting the wheels in motion to show Australian women could compete on the international stage.

Many of these women won state and national titles and were rightly given the chance to represent their nation.

The 1965 Socceroos, who competed in Australia’s first-ever World Cup qualifiers, were recognised in 2015 during the Hall of Fame ceremony, so recognising a team at this event is not without precedence. 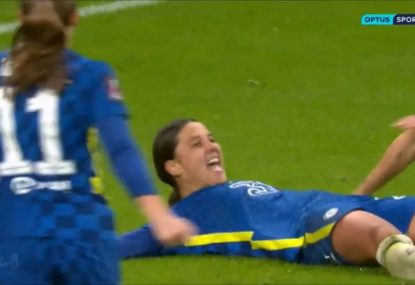