We are one step closer to crowning the 2020 French Open men’s and women’s champions, and while it’s no surprise to see Novak Djokovic and Rafael Nadal in the final four of the men’s competition, a new female champion at Roland Garros is imminent.

The women’s semi-finals will be played in the early hours of Friday morning (AEDT), with two relatively unknowns to clash in one semi-final and two former major champions to face off in the other.

Swiatek is aiming to become the first Pole to reach a major final since Agnieszka Radwanska at Wimbledon in 2012, while Podoroska is looking to continue a run that started in the qualifying rounds.

The Argentine is the first qualifier to reach the semi-finals of a grand slam tournament since Alexandra Stevenson got that far at Wimbledon in 1999, notably defeating another qualifier, Jelena Dokic, in the quarter-finals en route.

The 23-year-old booked her place in the final four by upsetting previous title favourite Elina Svitolina in straight sets in the quarter-finals on Tuesday night (AEDT).

But it’s whoever wins the other semi-final between Sofia Kenin and Petra Kvitova who will become the favourite for the title.

The American had gone into the tournament in somewhat poor form, suffering a double-bagel defeat at the hands of Victoria Azarenka in Rome, but has done well where it matters most – at the highest level of tennis.

Kvitova, on the other hand, is the oldest player remaining in the women’s draw and reached her first French Open semi-final since 2012 courtesy of a straightforward victory over German veteran Laura Siegemund.

She is aiming to become the third woman from her country to reach the final at Roland Garros in six years after Marketa Vondrousova (last year) and the now-retired Lucie Safarova (in 2015).

The 30-year-old is also looking to win her third major title, but first outside Wimbledon, where she is twice a champion (in 2011 and 2014). 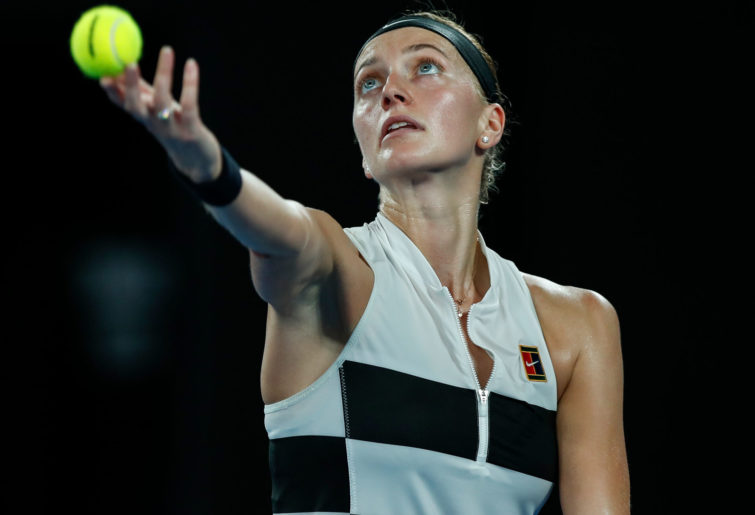 In the men’s draw Stefanos Tsitsipas defeated Andrey Rublev in straight sets overnight to book a semi-final showdown against top seed Novak Djokovic, who came from a set down to defeat Spaniard Pablo Carreno Busta.

The latter quarter-final between Djokovic and Carreno Busta was their second meeting in as many majors this year and notably saw the Serb disqualified for recklessly injuring a lineswoman, becoming the first man defaulted from a grand slam tournament since 2000.

But there was no such controversy this time, as the 33-year-old qualified for his tenth French Open semi-final and 38th major semi-final overall, and the possibility of another Djokovic vs Nadal championship showdown looms.

Nadal, for his part, has not dropped a set en route to his 13th semi-final on the clay courts of Paris and on Wednesday morning (AEDT) extinguished the threat of Italian youngster Jannik Sinner, who was the lowest-ranked player left in the draw.

The Spaniard does, however, face a tricky semi-final test against Diego Schwartzman, who won their most recent meeting at the Rome Masters last month and was the only player to take a set off him at the 2018 French Open.

Schwartzman goes into this match on the back of a marathon five-set win over Dominic Thiem, where he won the final set 6-2 after the first four sets required no fewer than 12 games.

The Argentine now has his work cut out for him, as Nadal has never lost a semi-final at the French Open and has also only ever lost one grand slam semi-final in Europe (the 2018 Wimbledon semi-final against Novak Djokovic).

Further, the Spaniard has history in his sights, as a 13th French Open title would extend his dominance at a tournament he has called home since 2005, which would double as a record-equalling 20th major men’s singles title, that record held by Roger Federer.

But before the men go to war, early tomorrow morning (AEDT) the women’s semi-finals will be contested, with either one of Iga Swiatek and Nadia Podoroska to continue her fairytale run while Kvitova and Kenin will look to reach another major final.