Underdone Boks are a launchpad for Rassie Erasmus's next masterstroke

The current WC ’19 documentary Chasing the Sun streamed by Supersport has once again highlighted the impact Rassie Erasmus has had on the psyche of the whole rugby fraternity is South Africa right down to the grassroots and our homegrown messiah is most definitely not done yet.

There is a real buy-in from all and sundry and an undercurrent of excitement and anticipation to take our rugby to the next level and he has most assuredly dusted off his strategic thinking cap.

All our local armchair connoisseurs are waiting with bated breath to see if the Boks will don the green and gold this year as our local version of Super Rugby kicks off this weekend. There is a suspicion that the Erasmus/Jacques Nienaber brain trust might just pull the plug on participating in this year’s Rugby Championship as all our local players are decidedly underdone, only this weekend starting to compete on-field.

That’s three or four months after the New Zealand and Australian players have laced up their boots.

Allied to a substantial injury count up north with new COVID infections on top of it, the feeling is that we have nothing to gain by setting up a weakened, green team for an infamous 50+ drumming by our southern hemisphere neighbours, especially right after bringing the WC home.

But every dark cloud has a silver lining; our famous conveyor belt of talent has once again thrown up some sparkling nuggets scorching into the headlines and kicking down the door for a seat at the top table; even our little wunderkind Herschel Jantjies, de Klerk’s very able understudy, was put to shame by the young Sanele Mohamba, showing similar growth to what Erasmus’ magic touch unearthed in Makazole Mapimpi and Lukhanyo Am pre-2019 World Cup and that’s even before he’s joined the Bok environment.

Ironically he very much reminds me of a young George Gregan; one of the real Aussie greats that also burst through before really having to shave.

But the drumroll doesn’t end there. The impact that Neil Powell, the Blitzboks’ sevens coach, has had on a young crop of smaller players like Cheslin Kolbe that before the Erasmus WC success focused on what is locally considered a “lesser” stage has been an eye-opener even for me.

The skill sets and situational awareness of young guns like Stedman Gans and Kurt-Lee Arendse, admirably spotted and roped in by Jake White, with others like Wandisile Simelane and greenhorns Rikus Pretorius and Kade Wolhuter fresh off the school benches adding to the chorus while the exciting young Aphelele Fassi is already overdue a Bok cap.

It seems we are entering a new era of Bok backline play that could push the Kiwis off their decades-old pedestal and nicely complement our overstocked international forwards and back-up forwards.

Our pending exit of Super Rugby to the north will also expose more local players to a different type of rugby and expand the skill sets of our top talent.

These are exciting times for SA Rugby indeed despite the pandemic’s dark cloud and unwelcome impact on world rugby. As the local Super Rugby competitions showed in New Zealand and Aus it is very good to expose young up-and-coming talent to top internationals in a local setting.

It undoubtedly accelerates their development and maturity, and Dave Rennie is very astutely harvesting some very exciting young Aussies and their rugby is about to become a lot more exciting, multifaceted and competitive.

Having watched Erasmus pull a few rabbits out his hat the last two years I suspect his Bok-mix if we do play this year to be an exciting blend of experienced, gnarly old campaigners with a few Japanese campaigners like Malcolm Marx, Willie le Roux and Kwagga Smith thrown in for good measure to mentor a new crop of Kolbes, Mapimpis and Ams to considerably raise the bar of the Springboks’ outside backline play.

It’s really amazing what a real level playing field with very enticing future prospects for all comers is doing to the soul of SA rugby.
The one concern is the impact the lockdown will have on the British and Irish Lions tour just around the corner next year but with the big pool of talent available; new and old should be enough to stop Warren Gatland’s attempt to have southern hemisphere triple crown bragging rights.

There are two players which I believe might just be winning aces for Erasmus’ Boks to play on the unsuspecting tourists.

Handre Pollard’s injury is serious and he might not be ready to face Gatland’s troops and Elton Jantjies will always fade on the big stage when the pressure is cranked up, so backup is an urgent necessity. 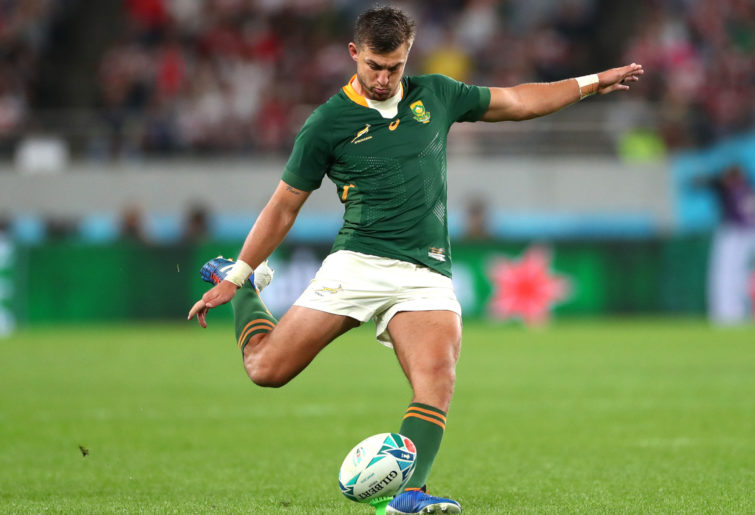 The young Shark Curwin Bosch has proved his special skill set and game management now he’s become a regular starter despite his defensive frailties when on the back foot. Richie Mo’unga was considered a poor defender early days, that is until he tracked down Kolbe from behind in the Rugby Championship with a defensive play that turned out to make the difference between a draw and a loss for the All Blacks so it’s a skill that can be worked on.

He’s the real deal with oodles of x-factor behind a good forward pack which he’ll have at the Boks and he just might be needed to stop the Lions next year.

Pieter-Steph du Toit, our current world player of the year has an engine that will run all day long, exactly the reason why his skills must be used in an effective, focused way especially if you have one of the stand-outs of his generation who has now resurrected his career on the softer fields of Europe after the brutal demands of our rugby ploughed him under as a young gun – Arno Botha.

He’s got an almost unnatural intuition for the game and at his best is a virtually unplayable hybrid of Francois Louw and Bobby Skinstad, the ideal weapon to unleash on the unsuspecting Lions next year.

The core of the WC Boks should front the Lions but the young guns and returning Boks will provide adequate cover assuming they get to play some competitive rugby. Erasmus’ success was accomplished in 18 games but against the Lions his prep will be a lot less.

He now has a core to build on so it’s definitely not mission impossible, it’s doable with the resources he’s proven so adept at mining and polishing for the big stage.