Essendon have been rocked by the request of Adam Saad to be traded to Carlton during this year’s trade period.

It is yet another episode in the contentious season that was 2020 for the Essendon Bombers. Saad’s rumoured reasoning is that he does not see success in Essendon’s future and has not enjoyed his experience under Ben Rutten where he was expected to be far more defensively accountable then under Woosha’s system of attacking speedy halfbacks.

But on top of the Joe Daniher machinations, Orazio Fantasia all but out the door and the rumours surrounding Zach Merrett, the Bombers have a lot of work to do over the offseason to prove they’re the proud club that their history shows they are.

This article is designed to be an in-depth investigation on the maladies impacting Essendon this offseason, and while I may not be the most reliable narrator (a predilection to blame the umpires sees to that) I will attempt to do my best to outline the issues that have affected and continue to affect the bombers.

1. The coach(es)
At the end of 2019 the Bombers resolved themselves to launch a coaching succession plan with Ben Rutten taking the mantle of senior coach in all but name for 2020. Finishing 13th with a paltry 79.2 per cent (third last in the competition) the Bombers were always going to face an offseason full of questions without the news of dissension within the playing ranks.

Pundits and players alike have described the Bombers as “unhappy” and “splintered” on the abrasive new coach’s playing style. Matthew Lloyd, objectively a club legend and passionate supporter in all things, believes the situation is more complicated and does not believe that outside observers can attribute it to Rutten’s coaching plan saying the following on Footy Classified on 7 October:

“Don’t give me it’s just around Ben Rutten’s gameplan…this is purely a culture issue of players not being happy, content, not being sure of the direction of the club, not sure if they’re going to get any success there.”

The more abstract cultural issues at the Bombers make the causes of what’s going on at Essendon far more multifarious and difficult to get an accurate handle on. Exacerbating matters has been the sense that players are uncertain who to listen to with both Rutten and John Worsfold seeming to take senior coaching roles throughout the season.

Essendon was roundly criticised for its non-decision decision at the end of 2019 and the sense of uncertainty has created a crisis in the management of the Bombers beginning with Patrick Ryder last year stating that he “really didn’t get a good feeling from being back there”.

Say what you will about burned bridges because of Essendon’s drugs scandal but Ryder’s actions hardly speak highly of the club that was supposed to be on the way up in 2019. This indicates to me that Ben Rutten has both a cultural calamity and a managerial one ahead of him in his first trade period as Essendon senior coach.

What’s more is the uncertainty pertaining to Rutten’s game plan and its ability to be applicable to the Essendon Bombers is difficult to quantify its efficacy, but Essendon took a massive step backwards this year in terms of their ability to play competent footy in the upper echelons of the competition.

2. The playing group
In the coronavirus world, there are innumerable uncertainties from list sizes to the salary cap, many things are still up in the air surrounding the AFL season for 2021.

But the Bombers have already had to field trade requests from stalwarts of the club in Joe Daniher and Adam Saad, there have also been rumours surrounding Michael Hurley, Cale Hooker, Zach Merrett, Orazio Fantasia and most recently Darcy Parrish to North Melbourne.

Having three to five 25-year-olds who are in the peak of their footballing powers all request trades is a dire indictment on the managerial standards present at Essendon in 2020.

Adding insult to injury is the fact that Jordan Ridley, Kyle Langford, Brayden Ham, Andrew McGrath and more have all yet to extend their contracts, raising the calamitous spectre of mass player walkouts during this trade period or during the preseason draft.

The Bombers need to get their affairs in order but having gaping holes all across their list despite trading aggressively in the last three offseasons has deprived the Bombers of valuable youth that Essendon would require to touch up their squad, most notably a key forward who’s dependable in the air, a backup ruckman, a big-bodied midfielder and a couple of key defenders to replace the ageing Michael Hurley and Cale Hooker (the Bombers have Aaron Francis, Jordan Ridley and Patrick Ambrose but each of them is more analogous to a third tall defender than a key back).

Suffice to say Essendon are facing a difficult situation or “rock bottom” as Matthew Lloyd was asked when he had to describe the state of play surrounding Essendon’s list. Most importantly they need to assure their fans that the Bombers are still a club worth supporting through this difficult transition. 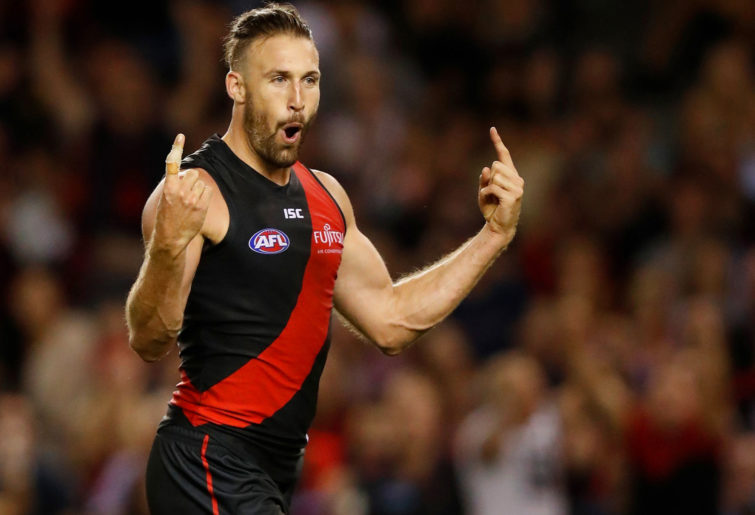 3. Off-field staff
The Bombers have recently changed the makeup of their board, promoting Paul Brashar to the role of president after Lindsey Tanner announced his retirement last year. In addition to this, club legend and keen footballing mind Kevin Sheedy has also been announced as taking a role on Essendon’s board, but will be more there to provide leadership and mentoring to Ben Rutten as he takes his first steps as a senior AFL coach.

Brashar has shown he has an abrasive style, questioning the commitment of players like Saad and exclaiming his frustration with them to give Essendon a more assertive look. I believe this is a mistake, such an aggressive take is only likely to ostracise already frustrated players.

I agree with the inclusion of Sheedy on the board as he is a legend of the game and still has great football acumen for an off-field role.

The biggest issue is one Adrian Dodoro, whose name has risen in infamy over the last few years for his hardline stances at the negotiating table and his ostracisation of other clubs’ negotiating staff. The Bombers cannot afford his insanity at the trade table this year, but he has shown himself to be an able drafter taking players such as Anthony McDonald-Tipungwuti, Ridley and Fantasia in the draft and turning them into relative superstars (particularly for where they were taken).

While he has some howlers of selections at the draft table, he’s done what is required to get good youthful talent coming through the club.

Finally, any other off-field staff that interact with the players that had involvement in the supplement saga should also be removed, I am of course referring to people like Bruce Reid who has been a wonderful servant of the club but I can’t help but wonder whether he has the capacity to perform his role to the fullest, the injury toll at Essendon over the last few years indicates to me that he does not, but it could also be simple misfortune for the Bombers.

4. So what now?
Essendon are on the precipice, they can either accept the fact that they are at the beginning of a dreaded rebuild and offer every player who wants out ample time to work through their issues and move to other clubs if need be, or they can attempt to load up on mature talent once again and attempt to rise to that most elusive summit in the AFL community, which is to say a premiership flag.

I for one, as an Essendon supporter of over 20 years, am getting tired of the hand wringing and the overestimation of our list. I believe in what Port Adelaide did a couple of years ago when they loaded up on picks at the so-called “super draft” to take three players (Connor Rozee, Xavier Dursuma and Zach Butters) that have featured heavily in Port Adelaide’s rise to success in this season.

What I mean by this is send Saad to Carlton for Pick 7, and depending on the offer we receive for Joe Daniher the Bombers should either receive an end of the first round compo or trade with Brisbane, giving the Bombers three picks within the first round.

Specifically, they should begin by looking at players like Tanner Bruhn, Finlay Macrae and Will Phillips for their midfield woes, Riley Thilthorpe, and Logan McDonald for their forward line struggles, and Jack Cox or Zach Reid for their defensive posts.

I highly doubt these selections will change Essendon overnight but they will provide an infusion of youth to a side that drastically needs it. Additionally, they should look at hiring a new recruiting manager as Dodoro has been a magnificent servant of the club but has shown he’s too stuck in his ways for anything to really get done.

Finally, I believe we need to hire in new talent from around the footballing world to provide support to the nascent coaching career of Ben Rutten, specifically I am looking at coaches like Dean Solomon from the Gold Coast, Matthew Lloyd from Haileybury and Brendon Goddard from Essendon.

This infusion of established talent will provide the right mix of new and old ideas to keep the Bombers moving forward to bigger and better things as well as close the chapter of our history that was the ASADA drugs scandal.