After the excitement of Week 1 of the finals where all four games were close and the average winning margin was less than ten points, Week 2 saw convincing winning margins that restored the order of the season.

It ensured the top four teams were the ones to play off in the preliminary finals next week for a shot at the title in the grand final.

Neither St Kilda or Collingwood were able to back up their heroics from Week 1. St Kilda at least had an excuse as they were missing three key players: Paddy Ryder (injured), Jake Carlisle (personal reasons) and Ben Long (suspended).

On the other hand, Richmond were able to bring in key forward Tom Lynch and Nathan Broad to strengthen even further their already strong team that features eight of the club’s top 100 game-players of all time, including four now in the Top 20 elite.

The Tigers’ win meant that Shane Edwards – who returned to the team late in the season after his partner gave birth – joined two legends on the all-time list (Perc Bentley and Vic Thorp) in 12th position. The win also meant that Trent Cotchin will now have the opportunity to play his 250th game in the preliminary final.

In particular Tom Lynch, who joined the top 100 list this season and has now kicked 93 goals for the Tigers (more than Kevin Sheedy and Bill Barrot and equal with Paul Sproule) and Daniel Rioli whose 80 goals see him equal Maurice Rioli and Dick Clay on the top 100 list. 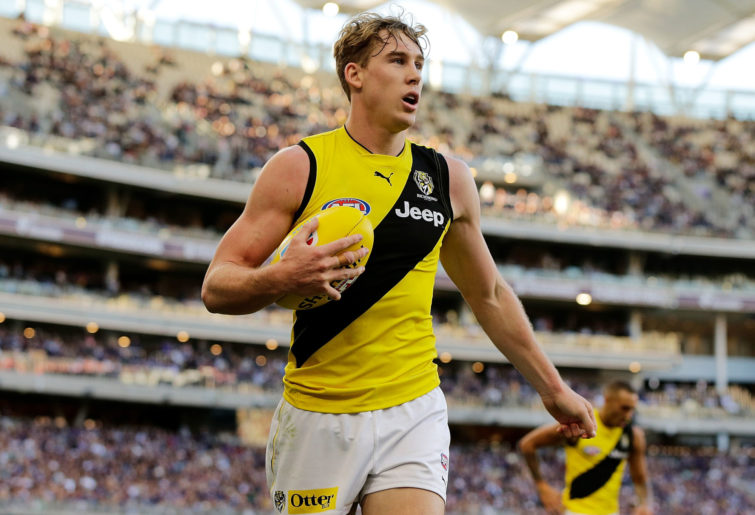 Tom Lynch of the Tigers in action during the round eight AFL match between the Fremantle Dockers and the Richmond Tigers at Optus Stadium on May 12, 2019 in Perth, Australia. (Photo by Will Russell/AFL Photos/Getty Images)

The only three current top 100 game players at the Saints at least had the pleasure of moving up the ranks with Jarryn Geary passing Carl Diettrich and Steven Baker, Sebastian Ross passing namesake Jim Ross and Bruce Duperouzel and Jack Billings equalling Vic Cumberland, Barry Lawrence and James Gwilt.

The Cats flogged the Magpies by over ten goals in a game where only the individual achievements of some players mattered after half time. AFL top 100 goal scorer Tom Hawkins became the 34th player to top 600 goals joining Jack Riewoldt, Josh Kennedy and Eddie Betts in the 60s.

The three elite AFL top 100 game players all played, but only Joel Selwood moved up a notch, joining Scott Thompson (Melbourne and Adelaide) on 308 games.

Collingwood’s newest member of the Magpies’ top 100 game players, Brodie Grundy, equalled 1970s and 80s player Ricky Barham in total games.
Two other achievements of note from this game were Jack Crisp finishing his sixth season at Collingwood without missing a game and taking his record of consecutive games to 141 games – now top 20 of all time, and Jake Kolodjashnij who has now completed 108 games without scoring a goal. Not quite top 20, but getting close.