The Wrap: Eight and a half crazy minutes light up the Bledisloe Cup

For eight and a half crazy minutes yesterday, the Wallabies and All Blacks duked it out like men, toe to toe, refusing to take the sissy’s way out and win a Test match with a drop goal after the siren.

It was thrilling stuff, intensity levels at boiling point despite the previous eighty minutes’ exertion, with both sides losing and regaining the ball, willing and thrusting their bodies into a position to win the match with a try or a penalty.

A day later and with heart rates restored to normal levels, both sides will have now reflected on opportunities spurned to win the match with a field goal. After all, if you’re prepared to accept an invitation to win by kicking a penalty, why should a Test win by a point-blank drop kick be any different?

The thing is, it’s never really been the way things are done in this part of the world. Players aren’t wired for it. That’s something that northern hemisphere players and Argentinians do.

Except however, that’s a theory that shouldn’t really add up, when you look at how ruthlessly efficient most NRL sides are when they need a field goal to break a deadlock.

This was a curious Test in that there were long periods when nothing much happened. But when they did happen, they sure happened with a bang.

A brilliant All Blacks’ counter-attack that saw the ball pass through the hands of ten different players before Jordie Barrett scored, should have been rubbed out by Rieko Ioane’s straying toenail.

Another blistering, sweeping counter-attack try, after Folau Fainga’a outfoxed himself on a line-out move, was rubbed out, this time by Ioane’s straying fingernail.

Codie Taylor then rubbed Fainga’a’s nose in it by running the exact same lineout variation, expertly sending George Bridge through a hole for Aaron Smith to beat Nic White to the corner.

But instead of the All Blacks upping the ante in the second half, as is customary against the Wallabies, the visitors maintained their possession advantage, got their line-out working, and engineered two superb finishes by their wingers, Marika Koroibete and Filipo Daugunu.

The work inside was top notch too, deception in the midfield drawing the All Blacks backline defence in too narrow for the first, and White showing initiative and skill to backhand the ball off the floor to Daugunu, for the second.

All of which were merely the support acts for what proved to be one of the most frenetic, crazy finishes in Bledisloe Cup history.

For that, Reece Hodge can claim much of the credit, his 80th minute penalty attempt, from 54 metres, instead of ending the match, cannoning into an upright – three-quarters of the way up, if you don’t mind – before rebounding into the field of play for the Wallabies to recover possession. 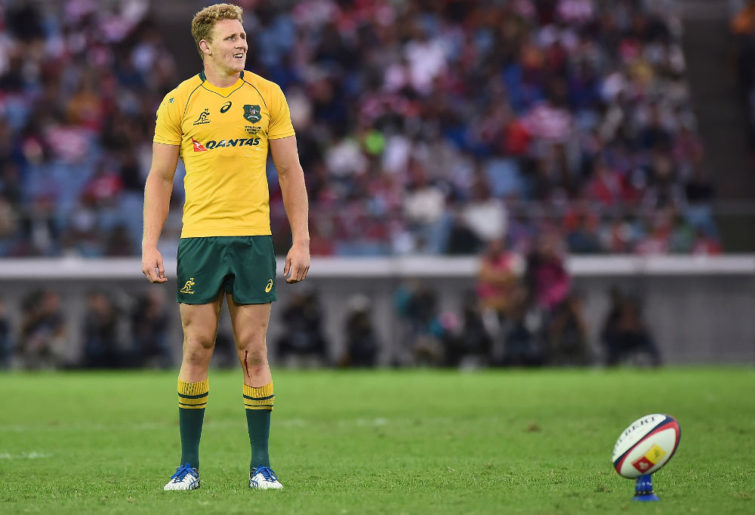 Reece Hodge of the Wallabies prepares for a conversion attempt. (Photo by Matt Roberts/Getty Images)

It was the All Blacks who showed their hand first, turning the ball over under intense pressure, but refusing to take the relief offered, and instead, looking to counter from their goal-line.

It was as if a challenge had been thrown down to the Wallabies – who on previous days might have gladly taken a 16-16 draw as a moral victory – and it was one accepted with relish.

Perhaps the outcome will galvanise those who seek to introduce golden point, or shoot-outs, or whatever artificial construct might be chosen to engineer a winner and a loser. But surely here was an example better than any, that in circumstances like these, a draw is a valid and just outcome. And given the way both sides played out the final stanza, an outcome as heroic and full of honour as any win or loss.

Wallabies coach Dave Rennie was clear in his post-match comments, about how there was no celebrating in his dressing room; only resolve to front up again next week, when he and everyone knows they will be facing an All Blacks team that has a brutal record when coming to Eden Park on the rebound.

Rennie was also clearly proud of the resolve and character shown by his men. Almost immediately, he has what feels like a solid platform to build from – safe in the knowledge that players like Harry Wilson, Matt Philip and Filipo Daugunu are indeed of international quality.

His defensive line operated with speed, and worried Richie Mo’unga and the All Blacks’ backline all match, on a day when conditions demanded extra care and attention on the catch and pass.

There was a nod to last year, in the way that the Wallabies played off Nic White at nine – something that confused the All Blacks in Perth, and caused them problems here again, not the least in the way it forced Smith to defend in close.

But in almost every other respect, 2019 already feels like long ago, and it was the Wallabies’ kicking game that fully underlined the transformation from the Cheika era, with Damian McKenzie – one notable exception aside – under pressure all match to deal with what was punted to him.

The Wallabies’ primary work-on this week will be the attacking breakdown – inaccuracy at the clean-out giving up six penalties while in possession. Halve that, and a draw becomes a win.

Ian Foster meanwhile, will be relieved not to start his international coaching career with a loss – even if for highly expectant fans, an All Blacks’ draw always feels like a loss.

He will be disappointed with the way his side failed to adjust to the swirling kicks – in the first half leaving it to deep defenders to rush forward to a ball swinging back and away from them, and in the second half, McKenzie edging too far forward, having to take the ball falling backwards, leaving himself in a passive, weak position.

Shannon Frizell started promisingly, but the possession deficit meant that neither he nor Taylor or Ardie Savea were able to assert themselves as ball runners – at least not until Savea found more of the ball in the final period.

This will be New Zealand’s work on. With or without the ball, they are accustomed to playing on their terms, but here it was the Wallabies who mostly dictated the tempo and method of the match.

Foster needs wins on the board, naturally. But more than anything, he needs his side to play with authority and – in time – with a signature stamp that is his.

He has a high-quality captain in Sam Cane, backed up by the leadership in the second row of Sam Whitelock and Patrick Tuipolotu. Expect nothing less than a more direct approach next week, aimed precisely at wresting back that initiative.

Speaking of captains, 100 Test matches remains a landmark reserved for the game’s truly elite players, a group of which Michael Hooper undoubtedly is part. His first Test, the shock 9-6 loss to Scotland in Newcastle in 2012 was a crazy match, albeit for different reasons. He now has another crazy bookend to match it.

The pulsating finish also showed how good rugby can be when it is played out on the pitch instead of the boardrooms. Nearly twelve months without international rugby is far too long, if only for the fact that it leaves too much space for administrators for posturing and dick-swinging, minute and note taking.

Thank heaven for the players to remind us all of why we love and follow the game. It was Wellington captain Du Plessis Kirifi, who put it best when, after a second successive agonising last-minute loss on the weekend, he said; “No more taking learnings, it’s time instead for action!’

None of which is meant to downplay the importance of high-quality off-field leadership. While this match might have stirred the loins of Wallabies fans and hinted at better days to come, Australian rugby suddenly hasn’t climbed out of the poor house as a result.

At least, not yet. The first thing Rugby Australia chairman Hamish McLennan should do today is put in a call to the Fox Sports, Nine and Ten network executives said to be still in contention for Australian rugby’s broadcast rights.

It’s very hard to sell any product when prospective buyers aren’t excited by the prospect of owning it. Those crazy eight and a half minutes might not have won Australia a Bledisloe Cup, but they should surely have shown interested bidders that both the Wallabies, and the game of rugby itself, are still worth opening the chequebook for.