Less than three months after he was appointed Western Sydney Wanderers head coach, Jean-Paul de Marigny has been sacked by the A-League club in bizarre circumstances.

The Wanderers released a short, three-paragraph statement on Monday announcing de Marigny’s departure, providing no explanation for the decision.

In an email to members, Wanderers chief executive John Tsatsimas didn’t outline the reasons for the decision but said an announcement on a replacement coach could be expected in coming days.

“There will be some expected changes happening at the club in the coming days,” Tsatsimas said.

“It is very important that we undergo these to ensure that we have a successful 2020-21 season and return back to where we belong.”

De Marigny was appointed in mid-July until the end of the 2020-21 season after a short stint as the club’s interim coach following ex-German international Markus Babbel’s exit in January.

In seven matches as interim coach, de Marigny led the Wanderers to three wins and three draws and had five matches as the full-time coach, winning two.

The Wanderers finished ninth in the COVID-affected 2019-20 season, missing finals for the third straight campaign.

De Marigny is the third coach to be axed by the Wanderers since foundation coach Tony Popovic left in 2017, with Babbel and Josep Gombau the others. 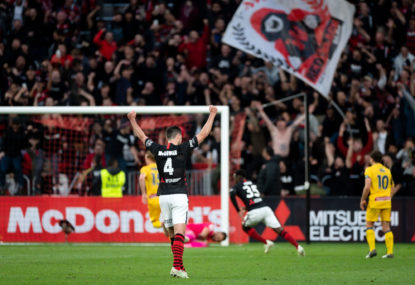