2020 Origin selections are gathering pace and are subject to much discussion, particularly in the Queensland camp.

The Maroons appear a little light on for talent this year when compared to their past days (and years and years) of glory.

Since its inception, 199 players have worn the famous Maroon jersey of Queensland compared to 287 players for the NSW team.

This lower number is reflective of both a lower number of eligible players for Queensland to choose from, and a greater loyalty in selections over the years.

When we think of QLD Origin players some absolute champions immediately come to mind.

But not every position in the Queensland team over the years has been filled by a legend of the game. For every superstar there is a player whose Origin career came and went before we noticed, but that in no way diminishes the fact that they were once selected to represent their State and did so with pride and passion.

Here are ten Cane Toads you may have forgotten
Bruce Walker
Walker was a powerful running second rower or lock forward who was a bit of a rarity, in that he played one game for NSW in 1975, prior to the beginning of the State of Origin concept, and one game for the Queensland Origin team in 1982.

He was also selected on the 1978 Kangaroo tour, but did not play in any Test matches, and notched up an impressive 226 first grade games for North Sydney and Manly.

Darryl Brohman OAM
To hear “The Big Marn” talk you might incorrectly conclude that he was an Origin legend, however he only represented Queensland on two occasions, Game 1 in the 1983 series and Game 2 in the 1986 series.

It should be noted though, that it was in Game 1 in 1983 that he had his jaw broken by Les Boyd in a sickening tackle, and missed the rest of the season. He actually did well to ever get back onto the field again, let alone turn out for Queensland once more in 1986.

Brohman played 114 games for Penrith and Canterbury and was a tough front rower with great ball-playing skills. You don’t need me to tell you what he’s done after football.

Scott Tronc
Tronc played one game for Queensland off the bench in Game 1 of the 1988 series, won by QLD 26–18. Tronc was more than a handy forward, and played 92 first grade games for Wests, Broncos, Canterbury and Souths in an eight-year career.

Before moving to Sydney, Tronc won the 1986 Brisbane Rothmans Medal.

Adrian Brunker
Adrian Brunker was a very talented winger who turned out for QLD in games 2 and 3 in the 1992 series and Game 2 in 1993. Apart from playing wing, Brunker could cover most other backline positions, was an exciting ball runner, and played over 140 first grade games in the NRL before finishing his career in England.

Owen Cunningham
Cunningham’s only appearance for QLD was off the bench in Game 3 of the 1996 series. NSW won by a point thanks to a Brad Fittler field goal.

But there was more to Cunningham than that. He was a clever ball playing back rower who played 276 first grade games in a 16-year career for Manly, North Queensland and the Northern Eagles. He also featured in all three Super League matches for QLD in 1997.

Nathan Fien
Nathan Fien was one of those rare players who, although an Australian-born, somehow became eligible to play for NZ? He joins Tonie Carroll as QLD Origin representatives who have also played for the New Zealand national team, and he represented the Kiwis on 22 occasions just for good measure.

A talented hooker, half or pivot, he had a long first grade career notching up nearly 280 games, however his sole match for QLD was Game 2 in 2001.

Danny Nutley
Nutley, or “Nuts” to his friends, was a hard as nails front rower who was called up by QLD for Game 3 of the 2005 season. Nutley was a true journeyman in every sense of the word, and played nearly 300 NRL and ESL games in a 12 year career.

Adam Mogg
Adam Mogg was a talented footballer who could play most positions in the backline, and play them well. He had a brief, but fruitful QLD Origin career, scoring three tries on the wing in the last two games in the 2006 series. He played 105 NRL games for Parramatta and Canberra and also played for four seasons in the ESL.

Jharal Yow Yeh
Yow Yeh was a footballer of freakish ability whose career was all over at the age of 23. He played 60 games for the Brisbane Broncos between 2009 and 2012 and was selected to represent Queensland on the wing in all three matches of the 2011 season, scoring two tries. 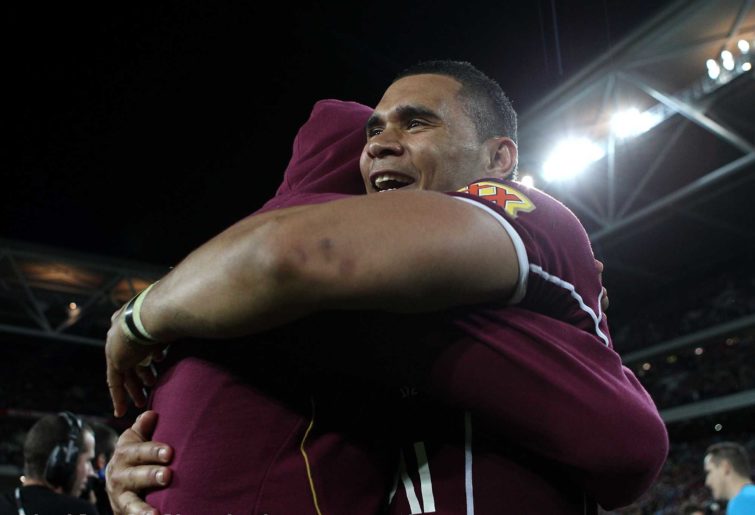 Jharal Yow Yeh of the Maroons celebrate victory during game three of the ARL State of Origin series between the Queensland Maroons and the New South Wales Blues at Suncorp Stadium on July 6, 2011 in Brisbane, Australia. (Photo by Mark Kolbe/Getty Images)

He was also selected in three Tests for Australia in that year, scoring three tries. Unfortunately, he never recovered from a serious leg injury received in Round 4 of the 2012 season. A great loss to the game.

Matt Ballin
Ballin was an excellent hooker for the Manly club over eight seasons but finished his career with two injury ridden seasons at Wests.

A great defender and clever dummy half, he was always behind Cameron Smith in the QLD hooking pecking order, but Ballin finally got his chance to represent the Maroons in Game 1 of the 2010 series when Smith was unavailable through injury.