This is a club that went from eight seasons (under two coaches) with no finals action and no identity, to a top-eight side – who won a final – with an exciting, defined gameplan. They’ve got players in their prime, great young reinforcements coming through and they’ve traded aggressively and effectively.

I’m a lot more bullish about their immediate prospects than fellow semi-final losers Collingwood – and will even go so far as to say I reckon they’ll finish higher in 2021 than any of this season’s thus far eliminated finalists (unless something drastic happens in the trade period).

But they’re not a premiership-calibre side just yet.

So, what went right for Ratten’s Saints this year – and what does need to address before Round 1 next year?

Let’s start with the good.

Firstly, St Kilda went from totally unthreatening up forward to being one of the most free-scoring teams in the AFL. After back-to-back 14th-place finishes on the scoring table, the Saints flicked the switch and became the fourth-best scoring side in 2020.

It’s the first time they’ve finished in the top eight for scoring since 2012.

Max King looks like all he’s been cracked up to be, Tim Membrey was solid in support, while Paddy Ryder and Rowan Marshall were both effective when thrown up forward too – making St Kilda one of the hardest forward lines to defend in the air this season

The big spark, of course, was the superb debut season in red, white and black from Dan Butler. His team-leading 29 goals also came with a league-leading 37 tackles inside 50 – a stat the Saints rocketed up to second in this year thanks as well to good support from Jack Lonie (10th) and Dean Kent (14th).

The Saints also improved dramatically in defence. Dougal Howard proved to be another superb recruit, while Jake Carlisle also enjoyed a renaissance and hopefully, for the club’s sake, re-signs. Ben Paton has also broken out as one of the competition’s premier small defenders.

Ryder’s ruckwork in tandem with Marshall saw them improve in the ruck, Zak Jones exceeded all expectations in his role as an inside mid, Jack Steele rose to new heights and Dan Hannebery, as sparingly as he appeared, showed he still had plenty of class when we was on the park. 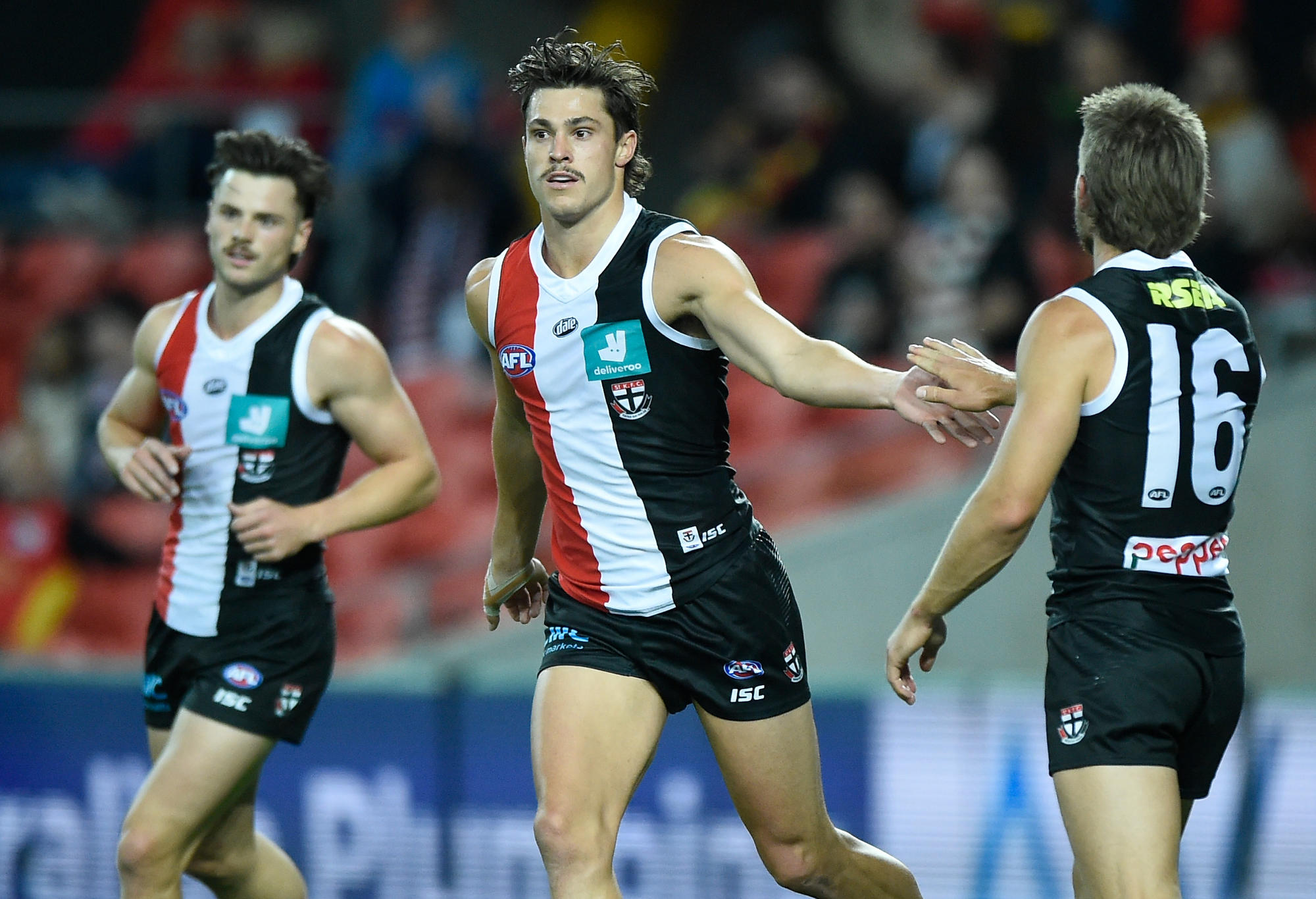 The Saints were clicking in 2020. (Photo by Matt Roberts/AFL Photos/via Getty Images)

So, how did it all end so emphatically against the Tigers – a team they’d defeated in the home-and-away season?

St Kilda’s two finals matches this season were incredibly informative; they showed off all of their strengths and just how good they can be when a game is played on their terms, while also exposing all of their weaknesses and how desperately they need to add more strings to their bow next year.

In both matches, the Saints narrowly lost the clearances, copped a bruising in the tackle count and got badly outdone in the inside 50 tally.

There were stretches in both matches where they were powerless to stop the ball movement of the opposition through the middle of the ground.

Against the Bulldogs, they benefited from Luke Beveridge’s reverse theme park selection policy, where only players under a certain height are allowed to play. Howard ran rings around the Doggies’ key forwards, while their woefully undersized defence was powerless to stop King, Membrey, Geary, Marshall and even Jarryn Geary clunking everything in sight.

Against the Tigers, it was a different story. Tom Lynch easily got the better of Howard, King and Membrey found it impossible to escape the clutches of Dylan Grimes and Nick Vlastuin and the Tiger midfield ran riot under a lack of pressure from their opponents.

Poor accuracy in front of goal exacerbated the woes of the forward line but, having blogged both games for The Roar, it was clear they played the same hand against Richmond that they did against the Bulldogs and the Tigers had all the answers.

So, what do they need to take care of between now and next season?

They’ve been linked with lots of big-bodied inside midfielders and that’s absolutely the way to go. The Saints need to be able to play a harder, grittier style of game when the situation calls for it.

They’ll miss out on Brad Crouch, by virtue of his desire not to play in Melbourne, but they’re making big plays at Tim Taranto and Jye Caldwell to aid them in the middle.

Trying to score Taranto is audacious at best, but they’ve got the Giants rattled on Caldwell – who looks to be a superstar in the making at just 20 years old.

Another player I’d like to see them have a go at is out-of-favour Fremantle midfielder Connor Blaklely. He played just the five games this season, but was a tackling, clearance-winning machine just a few short years ago and could add the missing layer of grunt to St Kilda’s engine room. 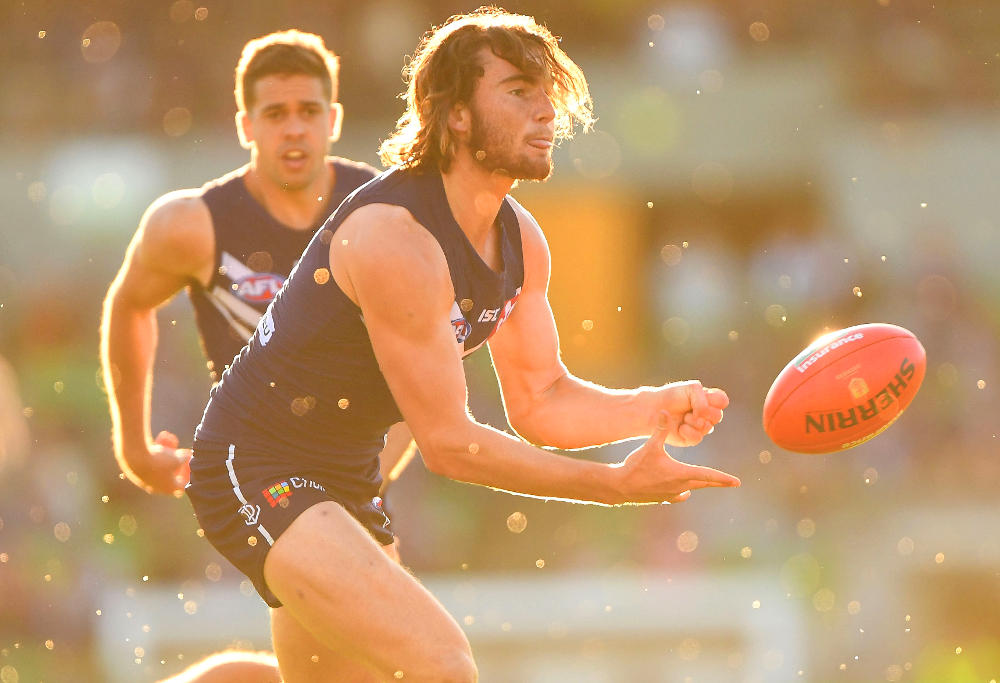 As for other potential targets, I’m not so sure. I don’t like the fact they’ve been linked with out-of-favour key forwards, while I’d steer clear of Jordan de Goey – who they chased heavily last time he was out of contract. He fills a very similar role to Dan Butler and the money he’s asking for won’t be proportionate to how much he can actually improve the team.

In any case, it’s nice to see the club’s long-suffering supporters having something to look forward to for the first time since Ross Lyon was at the helm.