What changes should the All Blacks and Wallabies make for Bledisloe 2?

The Roar
12th October, 2020
353
Join the conversation
4991 Reads
Advertisement
Write for The Roar

The first Bledisloe Cup match of 2020 delivered on so many levels, yet such is the quick turnaround and compressed state of competition this year that there is not nearly as much time to soak up a wonderful Test match as it deserves.

Instead, we move straight into the second match of the series in Auckland this Sunday, a match in which All Blacks coach Ian Foster will be desperate to show the Wellington display was a one-off for his team, while Wallabies coach Dave Rennie will be equally desperate to show it wasn’t.

Both sides have plenty to work on this week, and both said as much immediately after the game. There was plenty to like, and plenty they’d rather didn’t happen. And plenty of errors made in the face of significant pressure from their opponents.

The question after a performance like that will be identifying exactly which reins need pulling in preparation for the second Test.

Both sides had players unlucky to miss selection for Wellington, and there are full squads of players in the background angling to force their way into the side for Auckland.

Does either side need to make changes at the selection table? Do some players need a shake-up, a reminder that no player should ever take their selection for granted? Conversely, do the players who left nothing in the tank for 89 minutes deserve a shot at righting the wrongs from Sunday’s performance?

If changes do need to be made, how many players within the respective 23s are in danger of being left out this week? How many players from outside either 23 could make each side better for the next game?

Will Foster give his back-row combination some thought? Sam Cane was excellent and led from the front, but did he get enough out of Shannon Frizell and Ardie Savea?

Does Anton Leinert-Brown come into the midfield somewhere? Should he come in at outside centre and force Reiko Ioane back out onto the wing? Does he come into inside centre, forcing Jack Goodhue (and Ioane) out one place?

Assuming Beauden Barrett is fit and available, should he come in at fullback as selected for Wellington? Or is there an argument that he should steer the ship from no.10 after Richie Mo’unga was a way off his best?

Is Jordie Barrett quick enough for the wing, or is he of more benefit to the All Blacks with 15 on his back?

Does Dave Rennie tweak or does he leave the Wallabies alone for Eden Park?

How does he address the one glaring area of concern from the match, their ball retention in attack? He wouldn’t have missed the standout work of his former Chiefs ball thief, with Cane a constant threat on the ball as Australia missed the cleanout on multiple occasions.

It was an area the new Wallabies coach identified immediately after the game.

“We knew the collision area was going to be important and they won that battle,” Rennie said.

“We are well aware the elements played their part. We have got to make sure we defend as well next week, but the collision area is going to be the big thing for us.

“We have done a lot of work on it, but we didn’t go beyond the ball, so we got punished.”

Rennie was happy with the Wallabies scrum, though will he rethink the timing of Rob Valetini’s injection into the game? The Brumbies enforcer didn’t enter the contest until the 74th minute, replacing Lukhan Salakaia-Loto, who in turn had spent the previous nine minutes at blindside flanker after Rob Simmons came on in the 65th minute for debutant Harry Wilson.

And though they switched a lot throughout the game, is there an argument to utilise Matt To’omua’s territorial kicking and game management from flyhalf, with James O’Connor playing that same attacking role where he asked plenty of questions of the New Zealand defence from the wider centre channel? 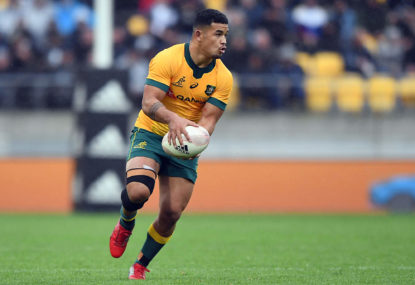 Similarly, O’Connor left points on the field with a missed penalty and two conversions. He kicked at 80 per cent throughout Super Rugby AU, but To’omua went at 86 per cent, including 20/22 penalties for the competition. As good a kicker as O’Connor has been in 2020, it perhaps was a little strange that a better performer from the tee was not used.

Clearly, it’s a fine line as international coach and there really is no right or wrong answer to any of the questions above.

But the fact these questions came out of a match that tested both sides to their limits suggests we’re in for another great show this Sunday if either side can find the improvements they will be desperately seeking this week.