Australia may not have won the battle on the scoreboard, with Reece Hodge’s long-range penalty goal at the death bouncing back off a post, but Dave Rennie will be happy that his charges came out so well in so many of the individual contests around the field in Bledisloe 1.

They won the majority of the mano-a-mano duels on the day and that will be a source of satisfaction to the Wallabies’ new head coach.

“We were under the pump early, but I thought we defended well for big chunks of the game.

“We were able to apply pressure through our kick game and scored a couple of good tries at important times.

“We had our chance right at the death and it went off the post and we were setting up for a drop goal and we ended up going wider.

“Then we had to suffer for the last couple of minutes as these boys do they put you through it.”

In the build-up prior to the game, Rennie had name-checked defence and kicking as vital aspects of the upcoming match. He had noted the importance of being able to kick effectively against the stacked defensive lines so common in top-level rugby and observed the All Blacks tended to struggle in games where their opponents could hold them below 16 points.

If he ever gives up coaching, Rennie may well have a future in the travellers’ caravan as a clairvoyant, because that was exactly New Zealand’s score and they did not win the game.

More importantly, his comments revealed a strong recognition of, and desire to move on from, the self-imposed strictures of the Michael Cheika era.

It took too long – far too long – for Australia to abandon the musical chairs defensive pattern which gave up an average of 36 points per game to their neighbours from across the Tasman in the World Cup cycle between 2016 and 2019.

Over the same four-year period, the Wallabies kicked an average of 15 times per game compared to New Zealand’s 21 in matches between the two nations. The All Blacks kicked more and they scored more points, but Cheika steadfastly refused to weaponise either his kicking game or his defence.

He simply chose not to use the kicking game, either to relieve territorial pressure in the team’s own red-zone or to impose it upon the opposition in theirs. Cheika lived by the sword of the handling game and he most surely died by it. It was a form of coaching suicide.

It looks most unlikely that Rennie will make the same mistake. On a squally, blustery afternoon which demanded an accurate kicking game, the Wallabies used the conditions to their advantage better than the All Blacks.

“We changed [things] during the game, and ended up kicking a fair bit,” Rennie said.

“We were able to box from within our 22 and they had a bit of trouble fielding those, so we were able to get territory and apply some pressure.”

At the heart of the Wallabies’ kicking success was their Nic White, who convincingly trumped his rival Aaron Smith in that department throughout the game.

Australia either recovered or forced turnovers from five of White’s seven kicks. New Zealand recovered only one out of Smith’s six. Three of his kicks went straight out across the sideline with a net gain of no greater than 30 metres, and that was with the wind in the Kiwis’ favour.

Last season White overshadowed his rival in the first Bledisloe Cup match, which Australia won 47-26, only to see the tables turned the following week, with the All Blacks winning 36-0. The gauntlet has been thrown down again and there is little doubt Smith will be champing at the bit to meet the challenge at Eden Park.

Maybe all of those rain-swept, windy afternoons at Sandy Park helped, but White’s box-kicking utilised the conditions far better than Smith’s. In the first half with the wind against him, he hung the ball up in the wind and forced Damian McKenzie and George Bridge on the left side of the back three to fly up towards the defensive line.

Both kicks force first Bridge then McKenzie to circle around from deep-set positions and charge upfield at full tilt to field the ball. That increases the chance of an error in judgment and those mistakes are duly made.

In weather conditions unfavourable to long passages of handling, the swift recovery of a box kick can create an immediate wide threat with minimal risk:

This sequence occurs after a third box-kick recovery. After the ball is regathered, the All Blacks’ backfield is caught in a state of temporary disarray.

McKenzie is running back towards centre-field, and Bridge is still trying to regroup from the middle back to the left. That leaves three tight forwards trying to mark the width of the field out towards Filipo Daugunu: 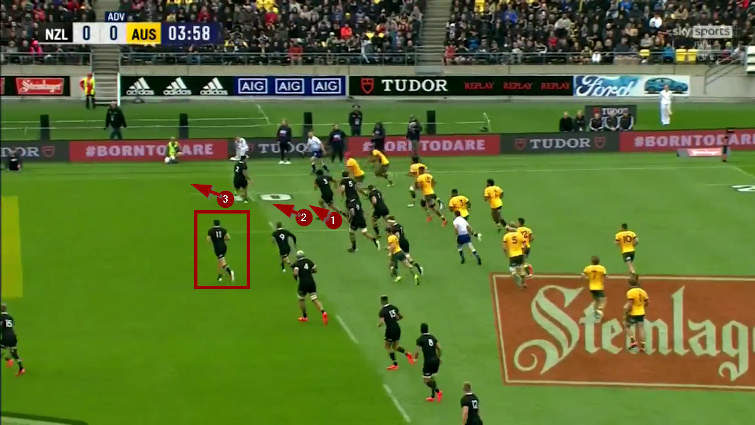 In the second period, White changed tactics with the wind at his back. Where Smith was prepared to find touch, White used the extra length to keep the ball infield and out-kick the New Zealand backfield. As in the first half, he yanked McKenzie around as if he was a puppet on a string – this time pushing him backwards, rather than pulling him forwards on the scrumhalf’s invisible loom:

Where the fullback had to run at least ten metres forward in the first period, now he had to turn on his heel and sprint back towards his own goal-line: 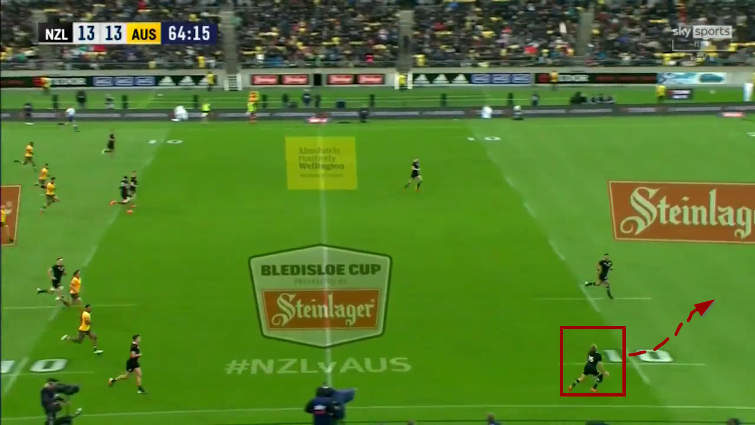 The first instance ended with a turnover penalty to Daugunu over the top of McKenzie at the tackle, the second forced the Kiwi custodian all the way back to the edge of his own 22.

When Smith tried to get his own back, he found the pathway of his best kick chaser, Bridge on the left, blocked by White and Fainga’a:

Bridge tried to penetrate through the seam between two defenders, but it was too tight to be splintered. The sequence finished with a theatrical fall on the floor by the Canterbury man: 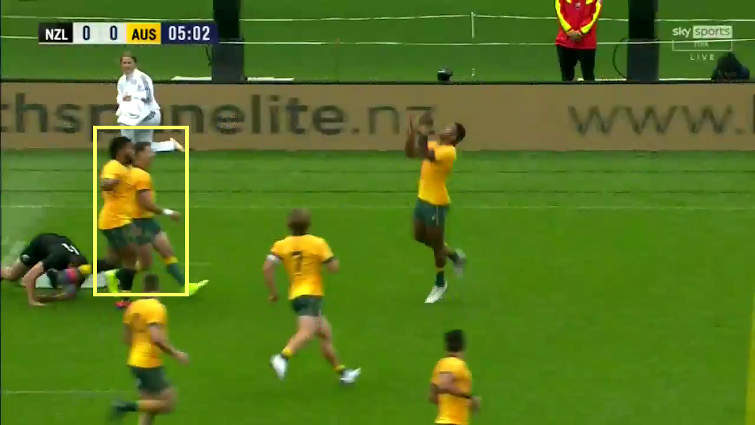 That is not a penalty for obstruction, it is just good defence.

White’s presence was also key to the success of his team’s short-side defence, another weakness of the Australian side when Cheika was in charge:

Both of these sequences originated from lineouts, the first a three-phase switchback, the second one phase earlier. The sheer defensive nous shown by White’s actions is revealing.

In the first example, he jumps out initially but realises that he will not be able to cut off the supply line to the wide channels. So, he breaks off the rush, connects with Pete Samu on his inside and Daugunu on the outer, and helps create another turnover opportunity for the Reds wingman at the tackle.

In the second instance, he makes the opposite read, continuing to surge upfield when he sees that he is already in the space between Smith and his passing target, Jordie Barrett: 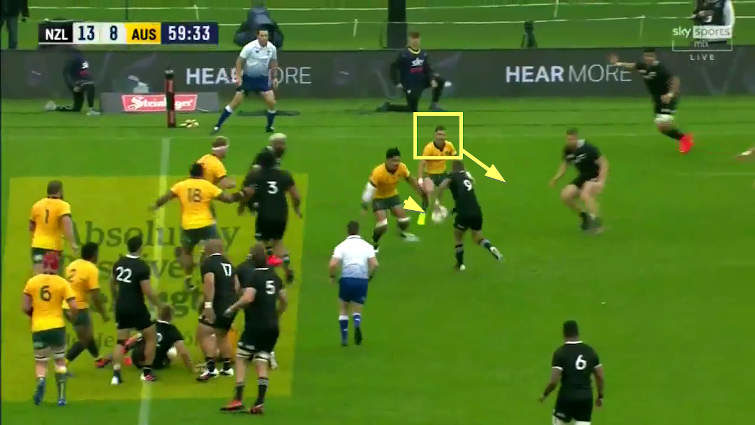 Add in a couple of trademark breaks around the base, and superb piece of skill to set up Daugunu’s try…

… and it became an impressive all-round contribution by the halfback.

Outstanding scrumhalf that he is, Smith will pick up the gauntlet at Eden Park. For now, it seems only right to watch ancient rivals duking it out on more or less even terms once more, individually and collectively. That is the true authenticity that both New Zealand and Australia are seeking.

Summary
Dave Rennie began a new chapter in his coaching career by implicitly promising a shift away from the philosophy of the Michael Cheika era.

The early signs are that Cheika’s lack of consistent regard for the kicking game, and for defence, are relics of the past. Both aspects allowed the Wallabies to not only stay in touch with their heavily favoured opponents, but earned them a legitimate shot at winning the game in the dying moments at the Cake Tin.

For dyed-in-the-wool Australian supporters, this is an encouraging portent that their Wallabies will be at least competitive in all circumstances, and under all weather conditions. There will be no excuses.

At the heart of that bristling sense of competition is Nic White. The tantrums are gone but the jostling sense of humour is still there. White will still be talking trash and needling, but he’ll do it under control.

That focus enabled him to dominate in the kicking game, break around the base and subtly shift the direction of attack with ball in hand. It also allowed him to make shrewd decisions in wide defence with a cool head in the heat of the action.

Now it’s up to possibly the greatest halfback of the last decade to respond. Over to you, Aaron Smith.