Ken Hinkley pulls Port from the canvas and into contention

In 2011, back when AFL was played at AAMI Stadium, the Port Adelaide Power were on the brink of extinction.

On the field, it had been their worst season in their existence. During one fortnight, they lost Chad Cornes’ farewell game by 138 points, and lost to Hawthorn by 165. On YouTube, a highlights package of them losing to the bye was doing the rounds. Off the field, there were calls to fold, relocate or merge the club that had become a carcass on the AFL landscape.

Of all their humiliating, lifeless losses, the ones to the expansion clubs were the most unpalatable. In August 2012, they ran aground against a side of school leavers at Skoda Stadium. Matthew Primus was promptly sacked. President Brett Duncanson fronted the press conference with him, announced it and then resigned himself. Keith Thomas, who wasn’t yet 12 months into the role as chief executive, found himself at the helm of a club without a coach, a president, a fitness boss or a future.

But footy quickly became an afterthought. In September, John McCarthy died on an end-of-season trip in Las Vegas. The players who were with him flew home and spent a week grieving with their teammates. Some 120 people – players, partners, parents – were inconsolable at Dom Cassisi’s house. Many of them still credit that experience with the building of their brotherhood and with turning the place around. But at the time, it was hard to imagine a club at a lower ebb.

The search for a coach dragged on and on, until a text message from Andrew Mackie landed, signalling Ken Hinkley’s interest. 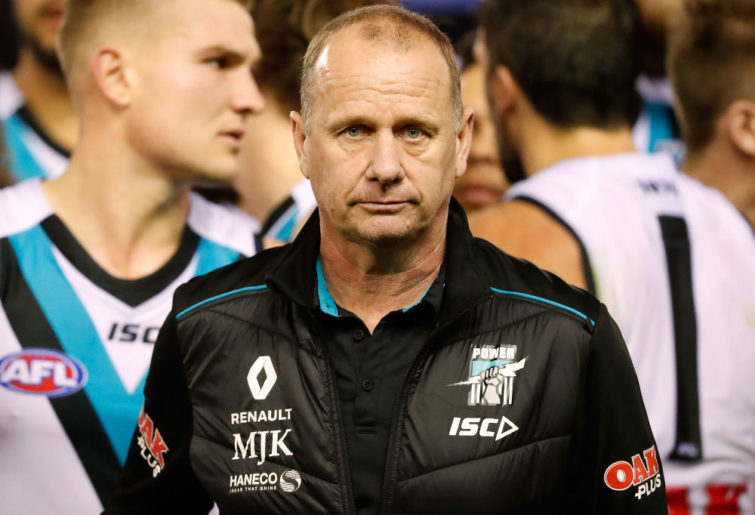 Hinkley, who had been beaten to a raft of previous jobs, was a seasoned, no-BS bloke from the country. He was also, like most successful coaches, a bit of an oddball. As a player, before being coaxed into reviving his career by Geelong, he had retired at 21, saying “I don’t do it (footy) because I like it.” He despised the city. The Camperdown locals, many of whom he’s coached and played with, still speak about him like he’s some sort of demigod.

He was just right for Port. At a time when there was a tendency to mollycoddle the millennials, his approach was unapologetically up-front. Even with the clock winding down in pre-season games, anyone who shirked a contest would be asked to stand in front of their teammates, play the footage and apologise. Under such forthright leadership, a lot of playing groups in the AFL probably would have revolted. But Port was sick of being a laughing stock. And Hinkley seemed like the type of bloke who could help them pull the club off the canvas.

In the meantime, Duncanson was replaced as president by a Sydneysider who hosted breakfast TV. To many, the appointment of David Koch smacked of desperation. In the years since, he’s probably caused as many problems as he’s solved. But he put his profile on the line when the club was a basket case. Before the Power even played another game, he helped bring a French car manufacturer on board as major sponsor. 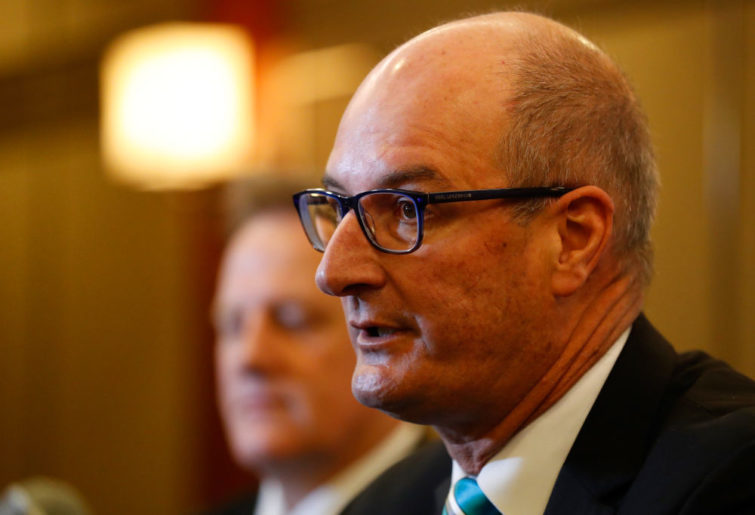 Under Hinkley you could tell they were a different side. They won their first five games by an average of six goals. Having evidently eschewed the playbook that said teams should be built on a score-stifling foundation, he had them playing a ballistic brand. And he seemed to have stripped everything back. From the get go, he spoke exclusively of effort, consistency and turning up. Even their mantra was “we will never give up”.

But it seemed to work. They started making a habit of coming from behind to trounce teams in final quarters. When they ran a favoured Collingwood team off their legs in the elimination final at the MCG, Nathan Buckley, and the rest of us, didn’t quite know what to think. Hinkley was named coach of the year.

Almost as responsible for the team’s transformation was high performance boss Darren Burgess. He had returned to Port in late 2012 after five years in international football and in the English Premier League. At Liverpool, he had access to every innovation imaginable, plus the latest techniques that were being implemented at cycling juggernaut Team Sky. He now baulked at the prevailing logic that suggested AFL players needed regular, off-leg recovery days to cope with the demands of the sport, telling them other athletes trained every day.

In 2014 he pushed the envelope even further. Ignoring the trend of spending stupendous amounts on mountaineering camps at high altitude, which research showed only gave a temporary benefit, he took them to Dubai to train in the searing heat. Each player committed $2000 out of their own pocket to get there.

When they landed, bleary-eyed after flying in economy overnight, Burgess sent them straight to a running track for 100 hundred-metre sprints. Over the next eight days, they covered 90-odd kilometres under the Arabian sun. Alipate Carlile, admittedly not put on this planet for aerobic activity, cites simply surviving it as one of the greatest career achievements.

They were beautiful to watch at the Adelaide Oval. Even their rabid fans would make the spine tingle before the bounce. The team now played as if keeping the ball in motion was its sole objective. Sides could go with them for two quarters, maybe three, but would invariably fall in a heap. They had won 11 games by Round 12.

But the problem with starting a season so white hot is the number of opposition analysts employed at other clubs – they all started poring over the stats sheets and down-the-ground vision. As winter set in, teams began to grind them down. In the preliminary final, they ran into one of the most disciplined and successful sides of this century. Still, if the game had gone for five more minutes, many think they would have won.

Since then, no one has been sure what to make of them. By halfway through 2015, they had lost games to no-hopers Carlton and Brisbane, and Kane Cornes to the Metropolitan Fire Service. Charlie Dixon was roundly viewed as the most overpaid key forward in the caper.

Season 2017 was even more confusing. They finished a game outside the top four. But they couldn’t beat a top-eight side to save themselves. In one of the more ridiculous elimination finals in recent memory, they chased down West Coast’s five-goal head start, somehow coughed up a two-goal lead towards the end of extra time and Luke Shuey scuppered their season after the siren. Hinkley was left in disbelief. But he saw the desolation on his players’ faces and knew he didn’t need to rant and rave.

Koch was ropeable. At a supporters function, he gave an address that would have been more suited to an online forum. “We don’t want players who are living their dream just by playing AFL footy,” he said. “If they’re not prepared to win a premiership for this club, we basically don’t want them. Let us know and we’ll trade them.”

In the ensuing week, all the major mastheads reported a ruined relationship between coach and president. According to The Australian, Hinkley sought to end his contract with a year to run so he could jet off to the Gold Coast and replace Rodney Eade. Damian Barrett called on Gillon McLachlan to intervene. In the end, it was probably all a load of posturing. Once Koch had cooled his jets, Hinkley’s contract was extended. But the stakes, and the general temperature at Alberton, seemed to have gone up a notch.

Still, you sensed they didn’t know where their list was at. They tried topping it up with some ageing free agents and former first-round draft selections. But by midway through 2018, Jack Watts was in the twos, Tom Rockliff was injured and Steven Motlop had been barely sighted. When they capitulated and missed the finals, the feeling was that Hinkley was on borrowed time.

It was curious, then, that they turned to the national draft. There had been a lot of talk about the possibility of a super draft, and list boss Jason Cripps was among the converted. He was convinced the top 20 was littered with generational players. They went all in on it.

During the trade period, they prioritised getting early picks in return for any players who had half a foot out the door, Chad Wingard included. For the first time in a decade, they went in with three first-round picks. In Connor Rozee, Xavier Duursma and Zak Butters, they drafted three versatile smalls who had as much steel as they had spunk, and suddenly, Port had a level of list depth and allure that was the envy of the league.

Entering 2019 so young, many expected them to go backwards. And they were as inconsistent as ever. But there was the odd harbinger to 2020. They beat the reigning premiers in Perth in driving rain. The 19-year-old Rozee led their goal-kicking. Duursma covered the most kilometres of any player in the league bar Andrew Gaff. Travis Boak – who had relinquished the captaincy – now looked and played like he was ten years younger. If Charlie Dixon had been able to get out of a jog, and if Ollie Wines had not written his season off on a wakeboard over Christmas, they might have been able to make a fist of it.

This year, Port have played in a simple and almost predictable manner. Their thick-set on-ball brigade is the league’s best at a stoppage. From there, they have moved the ball with a unique freedom. And they have kicked it long to Dixon at every opportunity, regardless of how many defenders are hanging off him.

They have become just the third side in the AFL era to top the table through an entire season. Somehow, though, they have managed to creep up on us. Halfway through the year, there was hardly an expert or betting company in the country willing to buy their stock.

In August, when Richmond were seemingly steamrolling towards the top four, they landed in Adelaide, threw the kitchen sink at them, and everyone expected Port to collapse. But the Power were irrepressible. When the heat was on, they became even more ferocious and more daring with the ball. If they had finished their work, they would have won by a mile more than the 21 points they did.

Hinkley is one of the few coaches who acts like he has the future of the sport in mind. At a time when teams increasingly seek to smother the game, he cultivates creativity and flair.

The footy gods are on board. It is their 150th season, after all. They don’t have a single injury. They are sleeping in their own beds. But this is finals time. They have only played one game in the past three weeks. The chances are a more defensively structured, risk-averse team is going to find them out. And the Tigers can taste a dynasty.