Like a lot of professions, it is common for rugby league stars to have their sons follow them into their profession. Siblings often follow their parents into their trade or employment.

This is seen in many professions, from farming, commercial fishing and building to name a few.

In rugby league, siblings often grow up around football clubs and dressing rooms. Their fathers often become their role models and are raised in a culture of competitive team sport.

Fathers often spend a lot of time with their sons in that environment and help them to develop from an early age through routine, training, fitness, skills and even diet.

In elite players there are genetic factors and high expectations. The sons of professional players are assumed to have outstanding bloodlines similar to top racehorses and are given opportunity to be nurtured into the top grade with high expectations of being the next generation.

Some would suggest this is nepotism.

The 2020 season has had its fair share of highlights and one of the best to observe was the Penrith Panthers taking the minor premiership.

A lot of this can be put down to the Cleary family. Coach Ivan and his son Nathan have had a really solid season. Ivan is in contention for Coach of the Year, and halfback Nathan is considered a front runner for the Dally M award.

This got me thinking about father and son relationships in the NRL and how a generation of NRL stars had followed in their fathers’ footsteps into the competition over the years.

Ivan and Nathan Cleary
Ivan Cleary was a former league star who played fullback and centre for the Sea Eagles in the 1990s and 2000s. Nathan plays halfback for the Panthers and has also represented NSW.

Matthew, Jack and Copper Johns
Matty played five-eighth with the Knights and represented NSW and Australia. His eldest son Jack debuted for the Rabbitohs this year and his youngest son Cooper debuted for the Storm.

Kevin and Billy Walters
Kevin played for the Raiders and captained the Broncos. He won six premierships and is now the Broncos’ head coach. Billy debuted for the Storm in 2019 and now plays five-eighth for the Tigers.

Wendell and Tristan Sailor
Wendell played on the wing for the Broncos and representing Queensland and Australian as well as becoming a dual international having played for Australia in rugby union. Tristan debuted for the Dragons in 2019.

John and William Hopoate
John played for several NRL clubs, predominantly the Sea Eagles as a winger. He also represented Tonga, NSW, and Australia. William is currently carving out a career as a back at the Bulldogs.

Wayne and Mitchell Pearce
Wayne was a spirited competitor who played for the Tigers. He regularly represented his state and country. Mitchell is an outstanding halfback who currently captains the Knights. He won a premiership with the Roosters in 2013.

Shane and Kyle Flanagan
Shane played for several clubs including the Dragons, Magpies and the Eels. Kyle made his first grade debut in 2018 at the Sharks and now plays halfback for the Roosters.

Paul, Curtis and Bayley Sironen
Paul played in the forwards for the Balmain Tigers. He played in successive grand finals in 1988 and 1989. He represented NSW and Australia. Curtis debuted for the Tigers and now plays for the Sea Eagles. Bayley debuted in 2019 for the Rabbitohs.

Geordi and Nathan Peats
Geordi played in the 1980s and 1990s. He played for the Bulldogs and the Rabbitohs. Nathan plays hooker for the Titans. He previously played for the Rabbitohs, Eels and has represented the Indigenous All Stars as well as NSW.

Ted and Bryson Goodwin
Ted was a journeyman who played for the Dragons, Newtown Jets and Western Suburb Magpies. Bryson is a goal-kicking back for the Sharks and has represented NSW and Australia.

Kevin and Jackson Hastings
Kevin Hastings was a professional rugby league player in the 1970s and 1980s. He was a hooker and a lock. Jackson is a talented player who has had stints at the Sea Eagles and Roosters and currently plays for the Wigan Warriors.

Steve and Jarrod Mullen
Steve played first grade for the Bulldogs and Wests in the 1980s. Jarrod was a one-club man for the Knights, playing at five-eighth and halfback. He was also a NSW representative.

John and Aaron Raper
John ‘Chook’ Raper was an outstanding footballer. He represented NSW and achieved 33 Test caps between 1959 and 1968. Aaron followed in his father’s footsteps, playing in the 1990s to the 2000s. He was a journeyman and played for the Sharks, Eels and the Castleford Tigers.

Jay and Ryan Hoffman
Jay played first grade in the 1970s and 1980s in the NSWRL competition. Ryan was a tough competitor and played in the forwards for the Storm as well as the Warriors and later the Wigan Warriors.

John and Scott Sattler
John was an uncompromising prop forward. He played in the 1960s to 1970s and captained the Rabbitohs to four premierships as well as playing four Tests for Australia. Scott played for the Panthers in the 1990s to the 2000s. He is often remembered for the try-saving tackle in the 2003 grand final won by the Panthers. 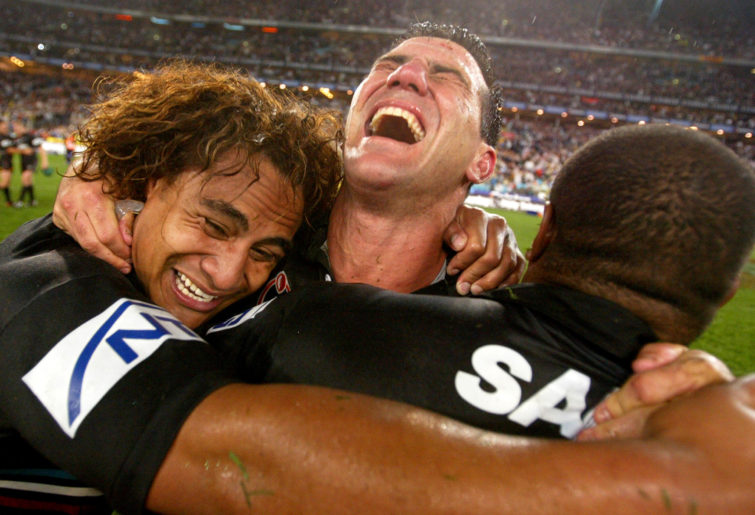 Allan and Craig Fitzgibbon
Allan played for the Balmain Tigers between 1968 and 1970. He was a member of the 1969 winning grand final team. He later took up coaching. Craig played for the Dragons and Roosters and won the 2002 grand final with the Roosters. He was a talented player. He also represented NSW and Australia.

Steve and Mathew Rogers
Steve played for the Sharks during the 1970 to 1980s. He won a Dally M player of the year and Dally M best lock award during his career. Mat was an outstanding athlete who also played for the Sharks between 1990 and the 2000s. He represented Queensland and Australia and became a dual international, playing rugby union for the Wallabies. Mat’s son Jack was the third generation to sign to the Sharks.

Gill and Adam MacDougall
Gill played in the 1960s for Western Suburbs and Balmain in the NSW competition as a centre. Adam ‘Mad Dog’ MacDougall played for the Roosters and Rabbitohs and in 1997 and 2001 won premierships with the Knights. He played as a centre and fullback. His brothers Luke, Ben and Scott also played in the NRL.

Clive and Daniel Gartner
Clive played in the 1950s and 1960s for the Bulldogs in the NSWRL competition. Daniel played in the 1990s through to the 2000s in the forwards. He was a Sea Eagle, however he also played club football in England.

Reginald and Mark Gasnier
Reg played for the Dragons from 1959 to 1967. He played 37 Tests for Australia and captained the side on eight occasions. His nephew Mark played 11 seasons with the Dragons, winning the 2010 grand final. He also represented NSW and Australia.

Michael and Jake Marketo
Michael played for Balmain in the NSW competition from 1983 to 1987. His son Jake played in the NRL for the Dragons from 2010 to 2017, predominantly playing in the forwards as a second rower, lock or hooker.

Kevin and Darren Junee
Kevin played rugby league in the 1960s to 1970s. He was a talented player and represented Australia in both league and union. Darren played first grade with the Roosters in the NSWRL competition. Just like his father he also played international rugby union for Australia.

Craig and Reed Izzard
Craig was a solid player who started in the centres and later progressed to the second row. He played for the Panthers, Eels, Tigers and Steelers in the NSWRL competition. Reed was a standout in the lower grades at the Panthers and finally cracked first grade at the Sea Eagles in 2020.

Bob and Darren McCarthy
Bob was a Rabbitoh and a Bulldog. He represented NSW and Australia. He later took up coaching. Darren also played for the Rabbitohs and Bulldogs. He was an extremely talented centre.

Bob and Scott Fulton
Bob was named among Australia’s greatest rugby league players in the 20th century. He later became a coach and commentator. Scott made his first grade debut in 1993 for the Sea Eagles. After Bob retired from coaching, Scott was not selected again.

Rod and Joel Reddy
Rod played for the Dragons between 1972 and 1983 and then for the Steelers between 1984 and 1985. He also represented NSW and Australia playing in the forwards. He played for the Eels, Tigers and most recently played for the Rabbitohs where he was a member of the 2014 premiership side. He retired in 2015.

Laurie and Ben Spina
Laurie Spina joined the North Sydney Bears in 1993. During his two seasons he played 37 games and scored 11 tries. He later went into commentating. Ben played for the Cowboys as a forward from 2014 to 2018. They were a talented rugby league family.

Noel and Kane Cleal
Noel ‘Crusher’ Cleal was a celebrated second rower for the Sea Eagles. He represented NSW and Australia with great distinction. His son Kane also played for the Sea Eagles, Bulldogs and Rabbitohs as a robust forward.

Peter and Daniel Mortimer
Peter played 190 first grade games for the Bulldogs in the 1970 and 1980s. He played in four grand finals with his brothers Steve and Chris. Daniel was a talented hooker and halfback. He played for the Eels, Titans, Roosters and Sharks.

Maybe it is time the National Rugby League invested in a father and son program to reward clubs and families who have dedicated their life to the greatest game of all.