Specifically looking at some of the best Finals games in the last five seasons.

My criteria for selecting the best finals games in the last five seasons is relatively simple. These games are as much entertaining as they are memorable.

They feature outstanding individual performances from some of the game’s greatest players and they all made lasting impacts to form the league which we see today.

5. Game 5, 2019 – Toronto Raptors 105, Golden State Warriors 106
The Warriors fourth straight trip to the NBA finals against the Raptors proved to be their toughest. The growing number of post-season minutes was beginning to show, with Klay Thompson missing Game 2 with a hamstring strain. This was epitomised in game 5 with the return of forward Kevin Durant.

Following a right calf-strain against Houston in the conference semi-finals, Durant missed a month of playoff basketball. He returned to make his first appearance of the finals, only managing 12 minutes before rupturing his Achilles early in the second quarter.

Durant would not return for the rest of the game, but Stephen Curry’s 31 points, along with Klay Thompson’s 26 points was enough to delay the Raptors championship celebrations. Toronto would eventually prevail, collecting the first championship in the franchise’s history.

4. Game 5, 2016 – Golden State Warriors 91, Cleveland Cavaliers 112
Entering game 5 down 3-1 in the series, it was win or go home for LeBron James and the Cleveland Cavaliers. Controversially Draymond Green was suspended for the game, following his fourth flagrant foul in the postseason.

Kyrie Irving and LeBron James made the most of his absence, becoming the first teammates to score 40 points each in a single finals game (each finishing with 41 points). Australian Centre Andrew Bogut picked up a lower leg injury early in the game. His defensive presence would be missed by the Warriors for the rest of the series.

Cleveland’s game 5 victory would be the turning point of the series, becoming the spark that would ignite the team’s historic comeback. But we’ll discuss that more later on.

3. Game 1, 2018 – Golden State Warriors 124, Cleveland Cavaliers 114
With the departure of guard Kyrie Irving, the stage was set for LeBron James to claim his redemption from his previous season’s championship loss to the Warriors. In what would turn out to be arguably the greatest individual performance by a player in a finals game, James finished with an astounding 51 points, 8 rebounds and 8 assists.

However, his performance is just as memorable as the mistake by Cleveland’s J.R Smith. Believing that his side were in the lead, Smith failed to call a timeout after gathering a rebound off a late free throw miss by Guard George Hill.

In reality the scores were tied. The game, as a result, went to overtime with the Warriors prevailing by 10 points. This game would also be the first of four straight wins for the Warriors, finishing off the Cavaliers in a convincing series sweep. 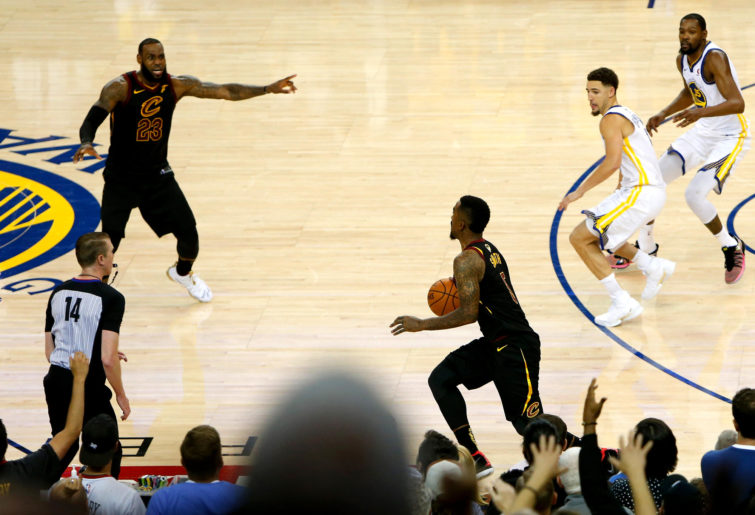 2. Game 5, 2020 – Los Angeles Lakers 108, Miami Heat 111
Some may call it recency bias, but there is no doubting Game 5 of this NBA year’s Finals was an instant classic. A severely outmatched Miami Heat went into Game 5 knowing a loss would mean elimination. The Lakers knew a win would see them the victors of the unprecedented 2020 season in the Orlando bubble.

The stage was set, and we were not disappointed, with a vintage head-to-head battle between Heat star Jimmy Butler and the Lakers’ LeBron James. Butler finished with a 35-point triple double, his second for the series. While James finished with 40 points, 13 rebounds and 7 assists.

The game also had a very memorable finish, with a wide-open miss by Lakers sharpshooter Danny Green and a wildly misdirected pass by forward Markieff Morris. As we know the Lakers would turn out to be the eventual winners of the 2020 finals, finishing off the Heat in six games.

Which takes us to our number one.

1. Game 7, 2016 – Golden State 89, Cleveland Cavaliers 93
Where do we begin. After failing to capitalise on their 3-1 series lead over the Cavaliers, the Warriors found themselves defending their title, on their home floor, in a game 7. Draymond Green led the way for the Warriors, with 32 points, 15 rebounds and 9 assists, including six 3-pointers.

It was not enough however, against a spirited display at both ends of the court by LeBron James. James’ 27 points, along with 11 rebounds and 11 assists topped off a comprehensive final’s performance. Including arguably one of the greatest blocks in NBA history, on Warrior’s Forward Andre Iguodala.

Cleveland’s historic comeback etched their names in NBA history, becoming the first team to recover from being 3-1 down in the finals.

The Cleveland Cavaliers have not been relevant since LeBron James was in the building, but by the way they have orchestrated their off-season, do…

After a crazy 2019-20 season, we have reached the NBA Finals and the season is drawing to a close. It is interesting to look…

While the world of sport has shut down due to the impact of coronavirus, there are signs - especially in Australia and New Zealand…

Starved of opportunities in Utah, Dante Exum will have the chance to spread his NBA wings alongside Boomers teammate Matthew Dellavedova after reportedly being…